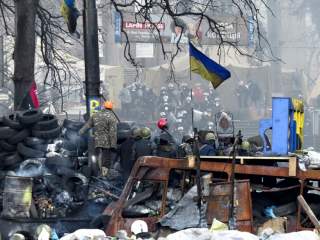 IN 1708, Charles XII of Sweden invaded Ukraine. His aim was to use it as a base for a final advance on Peter the Great’s Moscow. The Cossack hetman, Ivan Mazeppa, decided to throw his lot in with the Swedes in a bid to secure Ukraine’s complete independence. His decision split the Cossacks; while some followed Mazeppa, others elected a new leader, Ivan Skoropadsky, who reaffirmed his loyalty to the Cossack alliance with Russia. The following year, Charles was defeated by Peter at the climactic Battle of Poltava, Russia emerged as a player in European affairs, Ukraine was brought under closer control by the imperial government and Mazeppa fled into exile.

Was he a traitor who received his just rewards for his perfidy? Or was he a freedom fighter? The former is a more prevalent attitude in eastern Ukraine as well as the dominant narrative in Russia itself. The Russian Orthodox Church thus anathematized Mazeppa for breaking his oath of loyalty to Peter, and the Ukrainian Orthodox Church, which remains affiliated with the Moscow Patriarchate, continues to refuse to lift this sentence. Mazeppa is held up as an example of traitors who would sunder the unity of the East Slavic peoples. For Ukrainians who seek to join the Euro-Atlantic community, conversely, Mazeppa is a tragic hero who failed to bring Ukraine out from under Russian domination through an alliance with Western powers. His portrait graces the Ukrainian ten-hryvnia note. (Keep in mind that neither Benedict Arnold nor Robert E. Lee can be found on U.S. money.) However, a street named in his honor in Kiev was changed after the government of Viktor Yanukovych came to power in 2010.

One of Mazeppa’s predecessors as hetman, Bohdan Khmelnytsky, is lauded by some for his 1654 decision to sign the Treaty of Pereyaslav, by which the Cossacks of Ukraine pledged loyalty to the Russian czars in return for protection against their foes (Catholic Poland and the Muslim Ottoman Empire). One read is to praise Khmelnytsky for reuniting the fraternal Ukrainian and Russian peoples; another is to criticize him for running into the suffocating embrace of the Muscovite state and setting in motion the process of Ukrainian subjugation by Russia. (It was to celebrate the three hundredth anniversary of this treaty that Soviet leader Nikita Khrushchev arranged for the transfer of Crimea from Russia to Ukraine—an act that the 2014 annexation was meant to repudiate.) And, in the aftermath of World War I, another hetman—a distant descendant of the Skoropadsky who had replaced Mazeppa—attempted to create, under German tutelage, another Ukrainian state. However, Pavlo Skoropadsky, a former imperial general, was overthrown in December 1918 by Ukrainian revolutionaries who found his government insufficiently nationalist—because Skoropadsky’s government continued to use Russian in its administration and because the hetman held out the possibility of a future federation between Ukraine and a non-Bolshevik Russia.

Ukrainians disagree vehemently about the legacy of these three figures, but Russian president Vladimir Putin is quite clear about what version of history he adheres to—and this vision is guiding his policies on Ukraine.

In his public remarks, Putin has indicated that he is a proponent of the “triune people” thesis, which holds that the Eastern Slavs form one overarching community, all descendants of the original people of Rus’ and inheritors of the culture, religion and traditions that were centered at Kiev a millennium ago. In this view, the modern division of the Eastern Slavs into Belorussians, Ukrainians and Russians reflects only regional and linguistic variants of a common people, not the existence of separate nationalities. Putin’s address to both chambers of the Russian legislature on March 18, 2014, made this clear when, speaking about the relationship between Ukraine and Russia, he noted, “We are not merely close neighbors, but we are in fact, as I have said many times, one people. . . . All the same, we cannot be one without the other.” (He has made the “one people” comment on numerous other occasions; for example, in a September 2013 interview with press representatives.)

Putin’s assertion has been echoed by other senior Russian government figures. Konstantin Zatulin, the first deputy chairman of the State Duma committee overseeing relations with Russia’s “near abroad,” remarked in 2013, “Russians, Ukrainians and Belorussians are all one and the same people who due to historical circumstances happened to be called differently.” Even among those Russians who would recognize the existence of a separate Ukrainian nation, most would agree with the formulation often used by Putin’s spokesman Dmitri Peskov: that Ukraine is a “brotherly nation” to Russia. A small minority of ethnic Ukrainians accept the triune view; more might agree that Russians are a related, though separate nationality; and a view that is more prevalent the further west one goes in Ukraine sees contemporary Russians as barbarian interlopers who stole the legacy of Rus’ and thus have no legitimate claim to share in a common culture with Ukrainians.

A common nation may nonetheless be divided among separate sovereign states, each with their own distinct identity—the nations of the Anglosphere come to mind, or the division of the larger German nation into Germany, Austria and Switzerland. But for Putin, as well as much of the Russian elite, Ukraine’s independence is conditional. For Putin, it is axiomatic that there should exist a “special relationship” between the two countries that would be characterized by even closer political, economic and security ties than the ones that define the vaunted British-American connection—a feeling that is reciprocated in some segments of Ukrainian society but vehemently rejected in others. Six years ago, at the Bucharest NATO summit, Putin reportedly said to then president George W. Bush, “You don’t understand, George, that Ukraine is not even a state. What is Ukraine? Part of its territories is Eastern Europe, but the greater part is a gift from us.” In other words, he acknowledged that the western portion of Ukraine was territory that had been part of Poland, and before that, the Austro-Hungarian Empire, but asserted that the core of the country had historically been connected to Russia. But what Putin said afterward is even more important to consider. He apparently warned the U.S. leader that if any effort was made to pull Ukraine completely into the Western orbit and into opposition vis-à-vis Russia (specifically referring at the time to extending Ukraine a Membership Action Plan for NATO), then Ukraine would cease to exist as a state and Russia might be forced to take steps to detach Crimea and eastern Ukraine from Kiev’s control.

DURING HIS fifteen-year tenure as either prime minister or president of Russia, Putin has made forestalling Ukraine’s closer alignment with the West while pulling that country into a closer relationship with Moscow one of the organizing principles of Russian foreign policy. When he appointed Viktor Chernomyrdin, Russia’s prime minister from 1992 to 1998, as his ambassador to Ukraine in 2001, many Ukrainians saw in this move the beginnings of a new campaign for the Kremlin to increase its economic influence in the country. One critic labeled Chernomyrdin’s nomination as “the appointment of a new prime minister for Ukraine by President Putin.” However, because of his willingness to abandon far-flung Soviet Cold War outposts and to facilitate the introduction of U.S. military forces into Central Asia after 9/11, some in Washington assumed that Putin was no longer interested in treating former Soviet republics as geopolitical chess pieces and might even be convinced that fostering closer ties between the non-Russian Eurasian states and the West would be beneficial for Russia.

This illusion was quickly dispelled when the warming U.S.-Russian relationship during the first presidential terms of both Bush and Putin ran aground on the shoals of the so-called Orange Revolution in Ukraine in 2004—a tectonic shift in Ukrainian politics brought about both by popular discontent with electoral corruption and a split in the Ukrainian elite over the direction of the country. What was seen in the West as a triumph of “people power” was viewed in Moscow as a direct and possibly mortal challenge to Russia’s position in the post-Soviet space. For a variety of reasons—historical, cultural, political and economic—Putin could not be indifferent to the question of who would sit in the halls of power along Mykhailo Hrushevsky Street in Kiev. No Russian leader could have been.

From that point onward, the relationship between Russia and the United States (as well as with the European Union) has been directly connected to the balance of political forces in Ukraine. The attempt to “reset” relations between Moscow and Washington in President Barack Obama’s first term in office bore fruit only because the Ukrainian question had been taken off the table, first by the efforts of Prime Minister Yulia Tymoshenko to warm up to the Kremlin in 2009 and then by the election of Viktor Yanukovych in 2010. Yanukovych’s subsequent decisions to eschew NATO membership for Ukraine, to renew a long-term lease for the Russian Black Sea Fleet in Sevastopol and to give official status to the Russian language reassured Moscow that its equities in Ukraine were secure. His deposition from office in the wake of the Maidan protests in February, in turn, triggered the present crisis, which has effectively nullified any of the progress made in U.S.-Russian relations over the last two decades.