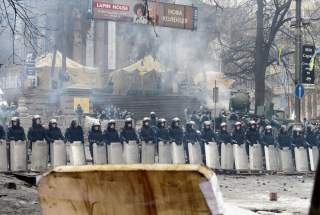 One of the most deplorable features of the Ukraine crisis has been the unwillingness of both Russia and the United States to restrain their respective allies. Until yesterday, when reports emerged that Washington is now counseling a go-slow approach to the prospective sieges of Donetsk and Lugansk, Washington has betrayed little anxiety that the Ukrainians might go too far. About the only daylight observable between the two states has been that the U.S. State Department refers to the insurgents as separatists, whereas the Ukrainians call them terrorists. But American officials have not condemned the use of that terminology by the Ukrainians, and they continue to defend Ukraine’s military actions as “moderate and measured.”

The language of the Ukrainian authorities is of a war to the death. "We will not stop,” said the newly appointed Defense Minister, Valeriy Heletey. He continued:

We will bring in maximum numbers of troops and weapons, and strengthen them with National Guard soldiers, police troops and the Security Service - all will be thrown in to defend the Donbas . . . to defend those cities from terrorists.

Those not willing to give up arms [will] understand that waging a war against the Ukrainian army and the Ukrainian people is not just dangerous but it will mean doom for these people . . . We will continue the active phase until the moment there is not a single terrorist left on the territory of Donetsk and Lugansk.

Heletey, the fourth defense minister since February, was appointed on July 3; in his maiden speech, he promised to liberate Crimea. “There will be a victory parade,” he declared, “in Ukraine's Sevastopol.” The minister acknowledged that the people in the southeast “are disoriented and afraid of Ukraine, of Kyiv. They are afraid they will be punished and tortured.” But he also warned the residents, in effect, that you’re either with us or against us. “The residents have to . . . first and foremost not support, passively or actively, those terrorists. If it works this way, the process will be very quick," he said.

Another piece of ominous news, from the New York Times, is that the new Ukrainian forces have learned to kill their fellow countrymen without being conscience-stricken about it. This, the Times intimates, is great progress. "They have overcome that psychological barrier in which the military were afraid to shoot living people," says one local expert. Once the military had gotten over their silly phobia, “and it became clear who were our people, who were foes, the operations became more effective."

There is no shortage of similar talk on the Russian side. Begging for Russian assistance, and charging betrayal against the Kremlin, the leader of the insurgents, Igor Girkin, says the armed forces advancing toward him are “true fascists in the sense of the word that our predecessors had used—hellhounds, murderers, bandits, marauders . . . Real scum."

It is deplorable that things have been brought to such a pass, and it would be bad all around—that is, for everybody’s true interests—for the violence to proceed to further extremes. In a better world, the forces on both sides would be reined in by their external patrons.

When secession was proposed for South Sudan and Kosovo, the argument used by the West was that that the violence employed by the Sudanese and Serb regimes made them unfit to govern the people in their disaffected regions. Given those precedents, the Ukrainians should think long and hard about the methods they employ to “annihilate” the “terrorists” in their southeast. If the result of their military operations is a badly alienated population in that region, they risk forfeiting their right to rule these people; that seems, at least, to be the general idea suggested by the precedents of South Sudan and Kosovo. Western countries, of course, have a well developed capacity to look the other way when their own allies commit misdeeds, so it is not probable that the equities of the case will decide it. But they should. In determining such questions, as Woodrow Wilson said, “the interests of the populations concerned must have equal weight with the equitable claims of the government whose title is to be determined.”

A possible deal, likely to be spurned by Ukraine but worth exploring by the United States and Germany, is that the Ukrainian separatists evacuate their positions in eastern Ukraine and are given safe refuge in Russia. In return, UN peacekeepers occupy the territory and work with Ukrainian civil authorities and international observers to hold a referendum that will tell us what the local population wants. How to frame the referendum might raise delicate questions, but it would hardly seem improper if the people in the Donbass region were given the right to make their opinion known in a plebiscite. Opinion in the Donbass is probably alienated from both the armed insurgents and the Kiev authorities, but no one can be sure unless it is determined by a free vote (which the previous referendum was not). The basic idea would be to get the armed men to hold their fire for a bit, so that the world could hear what the workers and pensioners think. An international conference convened to ensure Ukraine’s pacification would not necessarily be bound by such a referendum, but it would certainly help the diplomats and the outside world understand the equities of the case.

The tension between “self-determination” and “territorial integrity” has a long and storied history. It was at the center of deliberation during the Paris Peace Conference in 1919; since that time, these competing principles have frequently lain at the heart of international crises. In Ukraine, that tension expresses itself in the right to self determination held by the people of the Donbass (or Crimea), and the right to preserve the territorial integrity of Ukraine. Self-determination rests on the assumption that political authority is best constituted from the bottom up; territorial integrity rests on the fact that dangers to political stability can arise if provinces can secede at will.

Americans have believed in both self-determination and territorial integrity, but have struggled bitterly over their application to particular circumstances—that is, deciding which one to favor when they are put in conflict. Through most of its history, as Michael Lind notes, the United States was a champion of national self-determination. Americans believed in the right of every people to determine its own destiny. To be independent—that is, free from foreign rule—did not necessarily mean that every nation would or should become democratic; that had to be worked out by each nation’s own internal processes, in which it was improper for foreigners to meddle. There was wide consensus on this point, as Lind insists, but its attractiveness did not arise simply, as he also contends, from the thought that a world governed by this principle would be safer for the United States. It mattered also that this principle appeared as most conducive to justice.

Experience suggests that territorial integrity is generally an excellent principle but cannot prevail in every circumstance. Experience also suggests that recent U.S. policy, when territorial integrity has been put into competition with self-determination, has almost entirely depended on whose ox is gored. Consistency was not among the virtues of U.S. policy toward Yugoslavia’s dissolution. The memory of how Russia and Serbia were thrice disadvantaged in the breakup of Yugoslavia, in turn, played an important role in shaping Russia’s response to the upheavals in Ukraine.

The fact that the current crisis in Ukraine has its origin in an unconstitutional seizure of power in Kiev, leading to a wholesale change in the regional composition of the government, is relevant to how far the principle of territorial integrity should apply in Ukraine. Having supported the violent change in the status quo, the United States utters with ill grace its contention that the status quo is now inviolable.

Unless Obama were to intervene personally, however, there is no chance that the U.S. State Department would be attracted to anything like the formula I have described. Germany is a better candidate for leading the charge toward some such resolution, though the Germans have seemed very reluctant to break from America or Poland in the crisis. Putin would embrace it, but since it is not on offer from the West, he faces one of two grim prospects: an intervention of Russian “peacekeepers”, which would be denounced as aggression and bring down on Russia’s head further Western sanctions and a war with Ukraine, or domestic outrage over abandoning people Putin had pledged himself to protect.