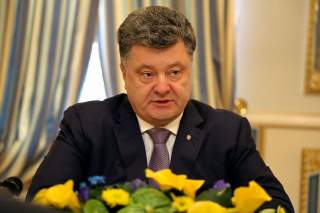 Earlier this month Ukrainian president Petro Poroshenko dramatically expanded his country’s sanctions against Russia by imposing multiyear sanctions on a number of IT companies. Once they are fully implemented these sanctions will impact some twenty-five million Ukrainians, or nearly every Ukrainian internet user.

These were but the latest in a litany of sanctions that began in 2014, after Russia annexed Crimea. First, restrictions were imposed on Russian television news programs, then artists, films and, most recently, books published in Russia. Most recently, Ukraine passed a law requiring 75 percent of television content to be in the Ukrainian language—leading one Western journalist to accuse Poroshenko of appearing to “equate being Ukrainian with speaking Ukrainian.”

Critics say the government is trying to create a virtual wall around Ukraine, in a futile attempt to keep out all Russian influence. They worry that once this is accomplished, Kiev will seeks to impose a nationalist agenda on the country by attacking as disloyal the cultural affinity that most eastern Ukrainians feel for Russia.

Comments such as those by Ukraine’s minister of culture, Yevhen Nyshchuk, who called eastern Ukrainians the products of “inadequate genetics” and a “failure of consciousness,” or the insistence of the civilian-military governor of the Donetsk region, Pavlo Zhebrivsky, that once it is back under Kiev’s control the government will impose “a normal democratic agenda on those people,” by placing a garrison of Ukrainian troops stationed in each of eastern Ukraine’s major cities, only reinforce those fears.

But there are also those who oppose these restrictive measures, because they are impossible to fully implement and are ultimately self-defeating. They point out that one popular banned site, Yandex, is a global enterprise like Google and Bing, and happens to be registered in the Netherlands. Its Ukrainian affiliate, Yandex.Ua, is not only legally separate from its Russian parent, but is also one of Ukraine’s largest taxpayers.

The banning of the country’s most commonly used business software seems particularly odd to many, since it is produced and maintained in Ukraine, and the company just received a certificate from the Ukrainian government saying that the product meets government security standards.

The government justifies its actions with the need to enhance national security in its war with Russia. But even the most sympathetic observers fail to see how denying access to Kiev’s most popular taxi service app, or to the accounting software most Ukrainian businesses use to pay their taxes, improves national security.

What is ultimately much more troubling, however, is that President Poroshenko and his advisors seem incapable of understanding that millions of Ukrainians view such efforts as attacks on their heritage and way of life. Many citizens continue to see Russian cultural and religious identity not as antithetical to their Ukrainian identity, but as complementary to it.

A November 2016 survey by the Razumkov Center in Kiev, widely reported in the Ukrainian press, revealed that more than half of Ukrainians considered Russians and Ukrainians “brother nations,” while a quarter described then as “one people.” It is not Russian propaganda, but the government’s continuing assaults on their cultural, religious and ethnic identity that sustain the belief, still held by the majority of people in eastern and southern Ukraine, that the 2014 Maidan revolt was an “illegal military coup d’état.”

For these Ukrainians, therefore, these are not sanctions against Russia. They are sanctions against them—the “Other Ukraine”, which does not agree with the current policy of severing all ties with Russia and rewriting the country’s history.

As proof, they point out that these latest sanctions are just the tip of the iceberg. There are at least four legislative initiatives now under consideration in the Ukrainian parliament to amend the current language law, which is considered too liberal because it permits regions where at least 10 percent speak a second language to adopt that language for official use. After it was adopted in 2012, nearly half of Ukraine’s regions promptly adopted Russian. Each new proposal, to varying degrees, now seeks to restrict the public use of Russian.

In the same vein, the latest quotas mandating that 75 percent of national prime-time television must be in Ukrainian are clearly not aimed at reducing the presence of the Russian news media in Ukraine—that was banned in early 2014. Rather, they are aimed at stifling the public voice of Russian-speaking Ukrainians.

In a country where, as recently as 2012, over 60 percent of newspapers, 83 percent of journals, 87 percent of books and 72 percent of television programs were in Russian, and where over 60 percent say they speak Russian at home and with their friends, the government is sending a clear message of exclusion rather than inclusion. As the speaker of the Ukrainian parliament, Andriy Parubiy, stated before the vote: “Speech is a weapon, and weapons are not handed over to the enemy.”

On the positive side, at the insistence of Ukrainian security forces, the parliament took a step back from plunging the country into outright religious warfare by postponing a vote on a law that would have reinstated the Soviet-era practice of having the state supervise the appointment of all senior clerics in the canonical Ukrainian Orthodox Church. It is being targeted by the government because it refuses to disavow its fraternal ties with the Russian Orthodox Church and refers to the current conflict in eastern Ukraine as a “civil war.”

Why would the government, which is in the midst of a profound economic and political crisis (it has had no formal parliamentary majority for more than a year), aggravate domestic tensions in this way? Because stirring up hatred of Russia has short-term political benefits.

First, it creates a reservoir of international support and funding for Ukraine. Second, it shifts domestic attention away from unpopular economic reforms. It also allows Poroshenko—whose popular support has fallen to critical levels—to run as a wartime president. Finally, questioning the loyalty of those who live in the East and South (not to mention Donbass and Crimea, which are excluded entirely from the political discourse) preserves the dominance of the nationalist agenda, which is supported mostly in western Ukraine. And even though, back in 2015, Poroshenko remarked that these regions are “the basis of Ukrainian statehood,” in fact this truncated Ukrainian identity, built solely around the history, religion and culture of the westernmost regions of Ukraine, has never sufficed as a basis for national unity.

The current course of denigrating those deemed insufficiently Ukrainian will only lead to a fracturing of the country along ethno-religious lines. This can still be prevented—if the government embraces an inclusive civic culture that respects Ukraine’s bicultural identity.

Nicolai Petro is Silvia-Chandley Professor of Peace and Nonviolence at the University of Rhode Island. He was a Fulbright Scholar in Ukraine from 2013–14, and is the editor of Ukraine in Crisis (Routledge, 2017). He currently resides in Odessa. Josh Cohen is a former USAID project officer involved in managing economic reform projects in the former Soviet Union. He contributes to a number of foreign-policy-focused media outlets and resides in Washington, DC.