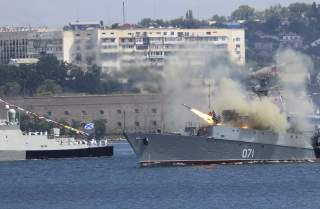 The events of 2018 in the Black and Azov Seas have clearly demonstrated the urgency for Ukraine on issues related to maritime security. As a result, the presentation at the end of November 2018 of the Ukraine fleet's development strategy through 2035 and its publication in January 2019 is an antithesis to the assertion that no attempts are being made to systematically address the issue of maritime security.

It’s possible, of course, to try to argue that the corresponding efforts should have been done since 2014. However, such criticism is an attempt to look at Ukraine’s maritime security in isolation from the general strategic situation. With the onset of Russian aggression, the military-political leadership of Ukraine was forced to solve the national Armed Forces’ general readiness crisis, and not only the Navy’s, during 2014–16. At the same time, the Russian Federation continues to represent the main military threat to Ukraine on land from deploying its combined arms armies near our borders and the constant pressure from powerful concentrations of Russian offensive groups during Moscow’s annual strategic exercises.

Therefore, the Ukrainian leadership’s decision to focus on reviving and strengthening the Land and Air Forces’ capabilities is the strategically right one, and the needs of the Navy took second stage. However, today this imbalance is being addressed not only through the development of a Neptune cruise missile. Recently, KRAZ introduced a TEL to be used in a ground anti-ship complex based on this cruise missile.

Consequently, one way or another, the appropriate work is underway, and the appearance of a strategy for the development of the Ukrainian fleet until 2035 is just another milestone of this work.

Strengths of the Strategy

The first thing that is striking is the structure of the document. The Ukrainian fleet’s strategy through 2035 corresponds to the best practices of the documents in this area. It contains the main elements of strategic documents—a clear definition of the role and place of the fleet in Ukrainian national security and defense, analysis of the operational environment, a realistic step-by-step action plan, and financial calculations. Several strengths in the Ukrainian Navy’s strategy are apparent:

A Comprehensive Approach to the Maritime Security

The proposed vision to develop the fleet by 2035 shows that the Ukrainian Navy’s command has a comprehensive view of what needs to be done to safeguard the interests of country in the Black and Azov Seas. The strategy clearly lists all the elements of sea power that together enable the state to influence the situation at sea. The document mentions not only the equipment component, but also the need for appropriate staffing, infrastructure and procurement in general.

The strategy’s implementation involves three stages—2019–25, 2025–30 and 2030–35. At each of these stages, a qualitative strengthening of the fleet capabilities is foreseen. At the same time, realization of the goals of one stage will be the basis for successful work in the next stage.

Initially, the Navy’s strategy implies protecting Ukraine's interests in the coastal zone (up to forty nautical miles). For this purpose, the Navy is planning to first install a system of intelligence and reconnaissance assets on the sea surface. This should help to better identify threats, which in turn would reduce the critical time between detection and response. Coastal multiple rocket-launched rocket systems (MRLS) and barrel artillery, as well as mines would help to counteract the corresponding threats. In addition, during 2019-2025, the gradual acquisition of anti-ship missile systems of various types—ground, air and sea-based—is envisaged.

Realizing the first stage’s tasks will guarantee the safety of the rivers’ deltas and ports, prevent the enemy from entering and operating at coastal zone, and even acquire the potential to fight off a blockade.

The second stage envisions the ability to operate in the exclusive economic zone (up to two hundred nautical miles). For this purpose, a system for monitoring the surface, underwater and air conditions at the appropriate range will be established. At this stage, the Navy should have the potential to be physically present in the exclusive economic zone and strike at the enemy primarily with anti-ship cruise missiles. Thus, it is precisely at this stage that the so-called “mosquito fleet” will enter game—small boats of little tonnage (up to five hundred to six hundred tons) that are capable of striking enemy assets with high-precision weaponry.

The third stage prescribes the ability of the Ukrainian fleet to operate in the open ocean and to be a contributor to global security. During the period of 2030–35, the Ukrainian fleet should be able to operate outside the two-hundred-mile zone at a considerable distance from its own bases. In this way, Ukraine will be able to participate in NATO/EU joint operations if needed. In addition, at that time, Navy ships will need the capability to hit both sea and ground targets. To perform all the above mentioned, the Ukrainian fleet will have to acquire its first multi-purpose corvettes.

That’s why it’s possible to see that the Navy’s development will be a step-by-step enterprise, without sharp moves that can put into question the whole process.

A thorough calculation of the financial side of the strategy

It is critically important that Naval Forces command has not only clearly outlined a step-by-step plan for developing the capabilities of the national fleet with priorities at each stage, but also assessed how much it will cost. Strategy realization in terms of equipment will cost between $70–90 million annually in the first stage, $100–250 million in the second phase, and $150-400 million in the third.

The fact that appropriate calculations were made is a necessary element because a strategy that does not take into account fiscal realities is doomed to failure from the beginning. This is especially important in Ukraine, which is able to allocate only $3.5 billion a year to the armed forces and $576–600 million for equipment in particular.

The course for NATO integration

The Naval Strategy itself was developed during 2018 with the involvement of such countries as the United States, the United Kingdom and Sweden, which are either members of NATO or are partners of the alliance. The fact that the document appeared to be so elegant is due to the involvement of foreign specialists.

But no less important is that the Navy’s strategy for 2035 was developed on the basis of NATO’s doctrine AJP-3.1 that concerns the alliance’s naval operations. The Ukrainian Navy’s strategy stipulates that by 2025 Ukrainian sailors will be prepared to act on the basis of this doctrine in cooperation with NATO forces. In essence, it is about implementing the key goal of Ukrainian foreign policy—namely joining the North Atlantic Alliance, including through increased interoperability. This development will be based on the experience and skills that have already been acquired within the framework of the international Sea Breeze exercises with NATO forces.

Also, the Navy’s strategy provides for assistance from international partners in developing the fleet. In this context, it should be noted that the Pentagon’s budget for fiscal years 2018 and 2019 envisages the possibility of financing projects to enhance Ukraine's maritime capabilities—including purchases of radars for monitoring the situation at sea.

Weaknesses of the Strategy

However, in cannot be said that the Navy’s basic document is deprived of weaknesses. There are at least four:

The strategy’s financial calculations are both a strong and a weak point. There is an open question whether Ukraine will be able to allocate $100–250 million a year for equipment at the second phase and $150–400 million as foreseen at the third stage. In 2019, the entire budget for the Ukrainian Armed Forces’ equipment amounts to $576 million, which is directed to the needs of the Land Force, Air Force, Navy, Airborne Assault Force and Special Operations Forces. If Ukraine's economy does not start to grow at least 6-10 percent a year, or it will not be decided to increase the budget of the Armed Forces in absolute terms at current rates of growth, then Ukraine will not be able to fully finance its Naval Forces’ strategy in its later stages. Since the military threat posed by the Russian Federation to Ukraine will continue to be primarily land-based, the priority will continue to go to the Land and Air Forces. In the coming years, the question may arise about the replacement of Soviet high-tech systems—fighter jets (Su-27, MiG-29) and air defense systems (S-300 PS/PT, Buk M1). This may hinder the financing of Ukraine’s fleet projects.

The contradictions in stipulated priorities in different sections of the strategy.

Analyzing the Navy’s strategy shows some contradictions and inconsistencies regarding the practical moments of work at various stages. In the section titled “OARS AND SAILS: STRATEGIC APPROACH AND REQUIRED CAPABILITIES OF THE FUTURE NAVAL FORCES,” the description of the first stage does not mention that the fleet should receive anti-ship missile systems of different types. This is mentioned in the description of the fleet development second stage of the same section. While in the section “MAPS AND SEXTANT: WAYS AND MEANS OF IMPLEMENTATION OF THE STRATEGY” it’s stated that corresponding anti-ship complexes shall be procured in the first stage.