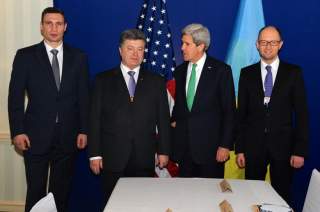 The Economist in its May 23 edition has reminded us of a tremendous advantage that we have in Ukraine: the strength of free-market economics. Clearly, the argument the magazine makes in its Leaders article "Ukraine: The Other Battleground," points out a significant fact—i.e., for Ukraine to succeed its economy must also succeed.

First, there are similarities between the Poland of 1989 and Ukraine of today. Poland's economy was in free fall in 1989 and it was a major debtor. In addition, the debt had been accumulated under a previous, discredited regime. There were also important differences. Poland was not facing a war on any of its borders nor was it facing an aggressive Soviet Union (yes, it was still the Soviet Union then.)

Western assistance ramped up slowly. On April 17, 1989, after the successful conclusion of the Roundtable Accords, President George H. W. Bush gave the United States’ first formal reaction in Hamtramck, Michigan. In that speech, the president announced that “we’re not going to offer unsound credits” and “we’re not going to offer aid without requiring sound economic practices in return.” In fact, President Bush did not offer any big aid numbers in that speech.

Instead, he announced the administration would support greater Polish access to the U.S. market, more sustainable debt rescheduling, allowing the U.S. Overseas Private Investment Corporation to operate in Poland, and a “private business agreement with Poland to encourage cooperation between U.S. firms and Poland’s private businesses.”

In early July, President Bush traveled to Warsaw and Budapest enroute to the G-7 Summit in Paris. In Warsaw and Budapest, the president announced that he would work to encourage “coordination and concerted action” among the G-7. He also announced funds to capitalize and invigorate the Polish and Hungarian private sectors that became the enterprise funds. In Paris, he followed through on his call for coordination and agreed that the European Commission would coordinate this effort, as the G-24, which it did for the next several years.

Two events ramped up Western and U.S. assistance to Poland: the seating of a Solidarity-led government and the coming forward of concrete proposals from that government on how the West could help. In September, Polish deputy prime minister Leszek Balcerowicz, in Washington for the IMF–World Bank meetings, asked for $1 billion as a fund to support the convertibility of the Polish zloty. The United States immediately relayed this request to the G-24, which was simultaneously meeting in Brussels. This $1 billion provided the backstop for Poland's move to convertibility. Fortunately, it was not actually needed and these funds could eventually be used to aid in the privatization of Poland's banks.

Poland also received a 50-percent debt reduction from its official creditors (the Paris Club). But this did not come until 1991, after Poland had demonstrated that it had begun the transformation of its economy.

Timing was crucial in the Polish case. The Mazowiecki government took office on August 24, 1989. Balcerowicz’s economic program took effect just four months later on January 1, 1990. Unfortunately, the timing is different with Ukraine. As I was recently told in Brussels, this is the twenty-fourth year of Western assistance to Ukraine. While the Euromaidan presents a welcome new opportunity for the success of reform in Ukraine, I was told there is reform fatigue among the Ukrainian people and donor fatigue among the donors. While Ukrainian economists received high marks, the questions are more political. Can the Poroshenko-Yatsenyuk government curb the oligarchs’ corruption and implement reform? Recent actions, including raising natural-gas prices, are promising first steps.

The United States needs to determine what its national interest is in Ukraine. If the Obama administration determines that we have a strong interest in an independent and prosperous Ukraine, then we will need to continue and perhaps increase the steps being taken on the security side. However, the success of Ukrainian reform also requires—as the Economist spelled out—that we engage on the “other battleground” as well. Ukraine cannot succeed unless its economy succeeds. This does not mean dumping vast sums into Ukraine. It does mean working with our European friends and allies to provide Ukraine with meaningful support tied to its implementation of reform.

With regard to U.S. assistance, there are more things we could do. One example would be to provide Ukraine with grant aid instead of credit guarantees, as we did with Poland. Given the size of Ukraine’s debt, it does not need more debt. We could also be innovative. While Ukraine is not currently eligible for Millennium Challenge Corporation assistance, particularly because of its corruption problems, we could use some of the mechanisms of the MCC to reward sound economic policies. Such a step would allow us to do more to assist Ukrainian reform while still protecting U.S. taxpayers.

The Economist is right that we can learn from our experience twenty-six years ago. President George H. W. Bush focused Western attention on Poland and Hungary at the 1989 G-7 Summit in Paris. Have we done the same in 2014 and 2015? Do donors need our help to overcome the fatigue of the last twenty-four years?