Ukraine's Revolution of Dignity is Not Yet Dead 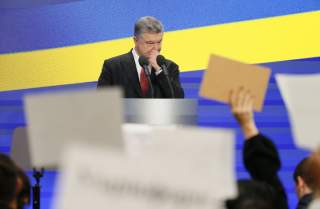 The Revolution of Dignity should have served as a rule of law lesson for Ukraine’s political elite—it has not. But before writing off the social justice-inspired movement as a loss, it should be credited with energizing Ukraine’s civil society, galvanizing a generation of spirited reformists, and positioning young and talented leaders in government. This generation of leaders now irks a Western-leaning administration that does just enough to develop the legal institutions required of it by its international donors, while also maintaining its grasp over ministries, courts and the prosecutor’s office.

The legal missions that burgeoned from the protests in Maidan Nezalezhnosti central square are among the country's most important accomplishments, targeting high-level corruption on one end of the economic spectrum while empowering Ukrainians with access to justice on the other. The National Anti-Corruption Bureau of Ukraine (NABU) and Specialized Anti-Corruption Prosecutor's Office (SAPO) fight graft, while the Coordination Centre for Legal Aid Provision (CCLAP) extends the criminal defense and civil legal services to all Ukrainians. However, these new institutions are not a panacea for corruption. Ukraine's long struggle against corruption will require political change, starting with fresh leadership.

Thomas and Christopher Carothers, writing in The National Interest, rightly call for a renewed U.S. foreign policy commitment to fighting corruption, recognizing the political instability it breeds abroad. To continue to fight corruption and bring stability to a tense and battered Ukraine, the U.S. must continue to offer diplomatic and political support to Maidan’s stakeholders, even when that support runs counter to the interests of its ally, the Poroshenko administration.

Hierarchical public-sector arrangements restrain Maidan’s new agencies from implementing their mandates, as they are susceptible to pressure from the executive and ministerial appointments that oversee their work. This poses a major dilemma for Maidan’s reformists. New leaders carry out their duties in the spirit of the Revolution of Dignity at the risk of upsetting higher-ups, termination, and even threats to their personal safety, or, they may acquiesce to business as usual, jeopardizing support from civil society and the Ukrainian people.

On several occasions, Ukraine's new generation of leaders have managed to introduce some semblance of horizontal accountability into their young democracy; however, Western diplomatic support has often been an important ingredient in those episodes. That support for independent institutions must continue, even as the U.S. examines its own relationship with the rule of law.

As the most consequential agency to emerge from the Revolution of Dignity, an independent NABU now holds the authority to investigate corrupt officials as it sees fit. But the decision to prosecute those cases is less shielded from political influence. Similar to U.S. Special Counsel, under Ukrainian law, SAPO prosecutors answer to their Attorney General, the General Prosecutor’s Office (GPO).

The executive control over the GPO that enabled past Ukrainian presidents to "lock up" their political enemies is still unchecked. Instead of addressing the country's long tradition of politicized prosecution, which played no small part in sparking 2014's protests, the power of appointment has been mired in politics. Ironically, the current Prosecutor General, Yuriy Lutsenko, who was appointed after an impromptu amendment removed a requirement that he must hold a law degree, was himself a political prisoner under the Yanukovych administration. Lutsenko's predecessor, Viktor Shohkin, only lasted for one year. Former Vice President Joe Biden had pressured Poroshenko to remove Shohkin for obstructing efforts to charge corrupt prosecutors.

In post-Maidan Ukraine, the issue is not merely about what corruption cases are charged, but which are ignored. That should be considered an improvement, as should the indictment of officials like Roman Nasirov—the former head of the State Fiscal Service, suspected of embezzling over $75 million—are political allies of the same officials who authorize their prosecutions.

But the prospect of an independent prosecutorial arm seems distant until SAPO’s opaque legislative mandate is addressed, GPO and NABU straighten their procedural and jurisdictional arrangements, and the charging documents and records of conviction in high-level corruption cases are made public. Furthermore, things got “messier” yet in April—the words of former U.S. Deputy Assistant Defense Secretary Michael Carpenter—when NABU presented evidence that the Head of SAPO, Nazar Kholodynsky, had obstructed justice by influencing prosecutors and judges and by warning suspects of upcoming searches.

Delivering Equal Justice to All Ukrainians

Episodes like those at the GPO are representative of the persistence of Soviet-era apparatchik-style appointments, which bring loyalists into office rather than well-qualified technocrats. Calls for new generations of Ukrainian leaders to enter government have echoed across offices large and small. Within the justice sector and judiciary, the void of political independence does not merely shield corrupt officials, it also undermines the Revolution of Dignity and demeans the everyday Ukrainian’s access to justice.

During the height of the Revolution, public defenders from the CCLAP represented the Bankova Street Prisoners, a group of protesters beaten outside of then-President Yanukovych’s mansion and detained for months. At that time, police officers discriminately informed suspects of their right to counsel; Article 59 of the Ukrainian Constitution, which has guaranteed that protection since 2000, was recognized by the Constitutional Court of Ukraine but is effectively toothless. CCLAP’s less obvious, but no less challenging task, is strengthening the defense bar by introducing adversarial legalism into a profession with a legacy of cozy relations between state prosecutors and judges— a job well-suited for its former director, Andriy Vyshnevsky.

Throughout his tenure at the CCLAP, Vyshnevsky had flagged corruption within the criminal justice system and advocated for whistleblowing reforms. Yet, when detailing how defense attorneys were expected to act as bribe mediators between judges and clients before a committee handling state judicial reform in 2015, the Ukrainian Bar Association became so irritated by Vyshnevsky that they disbarred him.

Last year, when Vyshnevsky was promoted to Deputy Minister of Justice after having overseen the CCLAP’s development since its infancy, the Ministry announced that a loyalist pick would succeed him. The CCLAP contested the ministry appointment and called for a formal application procedure. The Ministry of Justice granted the request, but after an application process carried out by a majority of his very own colleagues, the ministry appointee defeated three candidates holding significantly more criminal justice and civil legal assistance experience. The CCLAP offices and the human rights community were outraged and protested in front of their offices during a visit from Minister of Justice, Pavlo Petrenko—an unthinkable act in the pre-Maidan era—alleging that the application process was void of transparency and objective hiring criteria.

The ordeal did not sit well with the American and Canadian partners that had watched the CCLAP grow. Feeling the pressure, the Ministry reversed its selection, announced a new application cycle, and at the insistence of foreign missions, signed a memorandum of understanding with the CCLAP, stating in part that no employees would be terminated for voicing opposition to the appointment. Vyshnevsky was not so lucky. His support for his former office as a sitting deputy minister resulted in a request for his resignation, just weeks after being promoted.

With presidential elections less than a year away, the Poroshenko administration’s tough stance against the Kremlin may not be enough for the Ukrainian voter. The administration has rightfully embraced public international law to protect its borders from Russia’s illegal annexation of Crimea and acts of aggression in the Donbas. But the administration has neglected the health of the country’s domestic legal order and its progress against corruption. When Poroshenko angered civil society by rejecting its call for greater international involvement in Ukraine’s judicial reform, the President may have very well recognized that legal development assistance, which has traditionally posed a win-win to Ukrainian governments, now carries real consequences. To that end, the U.S. commitment to Ukraine's rule of law must continue to guide it in its diplomatic support for Maidan's stakeholders and Ukraine's future leaders.

Christopher D. Russell is an attorney and former Title-VIII Research Fellow at the Kennan Institute. He previously served as a Fulbright Public Policy Fellow in Ukraine’s Ministry of Justice, where he advised the Coordination Centre for Legal Aid Provision. He is a graduate of the University of Wisconsin Law School and Robert La Follette School of Public Affairs.