The Ukrainian Pivot: Why NATO Is More Crucial Than Ever 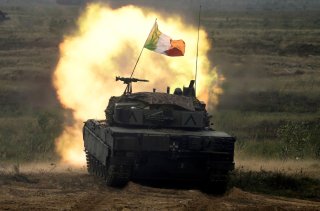 The crisis in Ukraine has put the world back into the groove of history established in August 1914. World War I featured massive land battles between Germany and Russia. The bloodiest front in World War II was also in the east, again between Germany and Russia. During the Cold War, Western Europe and the United States faced off against Russia in the guise of the Soviet Union. Now Europe and the United States face off against Russia again.

A little over a century ago, the brilliant American historian Henry Adams stated that the core problem of Europe was and always would be Russia, and how to ultimately integrate Russia into the “Atlantic combine.”

Literally, nothing has changed. In his famous 1904 essay, “The Geographical Pivot of History,” the great British geographer Halford Mackinder stated that the pivot on which the fate of world geopolitics rests is the “Heartland” of the Eurasian supercontinent, loosely identified as the region of Ukraine, a vast area generally located between the European and Russian spheres of influence. In his 1919 book, Democratic Ideals and Reality, Mackinder declared that the battle between Germany and Russia, and by extension between Central Europe and Russia, was not decided by World War I. In doing so, Mackinder virtually predicted World War II and the Cold War. The geopolitical drama over the heartland was critical to the fate of what Mackinder called the Afro-Eurasian “World-Island,” essentially the Eastern Hemisphere. And the only competitor to the centrality of the “World-Island” was its North American “satellite,” that is, the United States.

But that is not the whole story. Mackinder was followed by another great geopolitical thinker, the Dutch-American strategist at Yale, Nicholas Spykman. In 1942, Spykman propounded what came to be known as the Rimland thesis, which suggested that rather than the heartland interior of the Eurasian supercontinent, it was the coasts and peripheries of Eurasia—principally Europe and East Asia—which constituted the basis of geopolitical power.

Put the two theories together and you have the current crisis: the North American satellite and the rimlands of Europe and East Asia versus the great inner-Asian heartland powers of Russia and China, with Ukraine as both the pivot and flashpoint of this great contest. Since 1914, this rivalry was interrupted by Russia’s enfeeblement which followed the collapse of the Berlin Wall, giving Europeans a false sense of security in the 1990s. That interruption was followed quickly by another, the 9/11 head fake, which deluded the United States into thinking that Islamic terrorism was the chief geopolitical danger, when in fact Russia and China were already back on the rise.

With the return to the August 1914 groove of history, it is NATO that now looms paramount. NATO, which expanded to include most of Europe in the 1990s and was rendered problematic during the War on Terrorism, unites the European rimland in opposing Russia. Germany, which faces East and West and is desperate to forever end its modern history of warfare with Russia, is NATO’s fundamental question mark. Russia seeks to undermine NATO unity by prying away Germany with the lure of natural gas. The fighting may be in Ukraine, but the underlying strategic battle is about the fate of the Western alliance and the European rimland. If NATO fractures in some way, it would mean a victory for Russian president Vladimir Putin, however messy the military situation in Ukraine becomes. Holding NATO together during the Cold War was easier because Europe did practically no trade with the Soviet Union and instead faced the specter of thermonuclear war. But now, in an era of globalization, with Europe economically integrated with both Russia and China, alliances are much trickier enterprises.

But if NATO can hold fast, whatever the vicissitudes of this crisis, then the European rimland and its North American satellite can eventually triumph. A similar drama is unfolding to the east, where China is attempting to undermine America’s individual treaty alliances in the western Pacific. Taiwan is the East Asian rimland’s equivalent of the Ukrainian pivot and, if it ever becomes obvious that Taiwan cannot or will not be defended by the United States, then every U.S. ally from Japan in the north to Singapore in the south will begin to make side-deals with China. This process may occur outside the headlines, but it will nevertheless undermine the North American satellite’s command of the East Asian rimland.

This global contest may not be determined in the coming days or weeks as the Ukraine crisis (and by extension the Taiwan crisis) will naturally have successive, drawn-out phases. Other regions will help affect the outcome. The Middle East, by virtue of America’s long-standing naval operations in the Persian Gulf and China’s activities to establish trade, energy, and logistical hubs for the Belt and Road Initiative (BRI) throughout the Arabian Peninsula and the Levant, will constitute an extension of the heartland-rimland rivalry. After all, the BRI is China’s attempt to become both a heartland power, which it already is, and a future rimland power by dominating the Indian Ocean. Any political upheaval inside Iran, located between the heartland of Central Asia and the Persian Gulf rimland, will be crucial to this drama.

Remember that an international event did not end the Cold War, which instead ended as a function of domestic politics. The Soviet Union began to crumble from within beginning in the late 1980s. This latest phase of the heartland-rimland battle could, on some future morrow, conclude similarly. It may all depend on the relative domestic health of Russia, China, and the nations of the West. The political tensions within Western societies are out in the open; those within Russia and China are more opaque, because they are authoritarian societies. For the moment, however, much will depend on NATO and the degree to which the alliance can maintain its momentary unity.

Robert D. Kaplan holds the Robert Strausz-Hupé Chair in Geopolitics at the Foreign Policy Research Institute. He is the author of The Revenge of Geography: What the Map Tells Us About Coming Conflicts and the Battle Against Fate (2012).