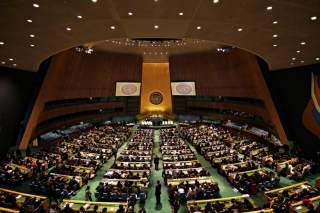 The United Nations Security Council votes on Monday [July 17] on the Iranian nuclear limitation agreement. The timing of this resolution—well before the Congress votes up or down in mid-September— has been met with a wave of indignation on Capitol Hill.

Some Democrats have joined Republicans in expressing their displeasure, charging an “end run” of the Congress, disregard for its oversight role, and a violation of U.S. sovereignty. Chairman Bob Corker (R-TN) of the Foreign Relations Committee called the move “highly problematic” and “an affront to the American people.” Ranking Minority Member Ben Cardin (D-MD) told reporters that “I think it is somewhat presumptuous to take it to the UN for a vote before the Congressional review is over."

In actuality, the Obama administration is following in the footsteps of the George H.W. Bush and George W. Bush administrations. Both went to the United Nations seeking support for military action against Saddam Hussein before going to the U.S. Congress. If this sequence is appropriate for making war, it should also be appropriate for avoiding war.

A supportive vote on the Iran deal on Monday is a foregone conclusion. The five veto-wielding, permanent members of the UN Security Council were all parties to the Iran negotiations, and all support the results. Later this fall, it’s likely that there will be a vote in the UN General Assembly on this deal, which will also be approved overwhelmingly. Indeed, there may be only one negative vote, cast by the state of Israel.

These UN votes do not prejudge or violate in any way the Congress’s role in considering the merits and weaknesses of the Iran agreement. Implementation of this deal will only follow the process of Congressional review negotiated between Senate Foreign Relations Committee Chairman Corker and Ranking Minority Member Cardin with the White House.

If the Congress votes, after due deliberation, to oppose the terms of this agreement, President Barack Obama has promised to veto a resolution of disapproval. Congress will then have the opportunity to override this veto. Failing this, implementation will begin, as laid out in the complex terms of the Joint Comprehensive Plan of Action agreed upon by the United States, Iran, France, Germany, Great Britain, Russia and China.

There are strong precedents for going to the United Nations before going to the Congress. Following Saddam Hussein’s invasion of Kuwait on August 2, 1990, President George H.W. Bush deployed troops to Saudi Arabia to clarify that Saddam’s actions would not stand. By November of that year, the Bush administration went to the U.N. Security Council to sanction military action against Iraq. On November 29, 1990, Security Council Resolution 678 was passed, which authorized the use of “all necessary means” to evict Iraq from Kuwait. Only then did President Bush ask for the Congress’s support for military action. His request was made on January 8, 1991—a full month after the U.N. resolution was passed. Congress granted authorization on January 14. The United States commenced military action two days later.

President George W. Bush followed the same sequencing prior to the 2003 Iraq war. His administration first went to the UN in September, 2002 to seek authorization for the use of force against Iraq. The U.N. passed Security Council Resolution 1441, which gave Iraq one final opportunity to comply with its disarmament obligations before it would face “serious consequences.” This UN Security Council resolution was passed a full month before Congress authorized the Iraq War Resolution on October 16, 2002.