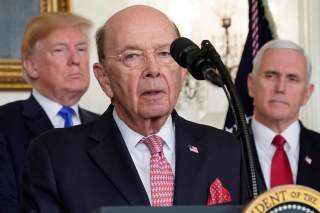 Presidents Donald Trump and Xi Jinping have backed away from the escalating U.S.-China trade war by agreeing to restart negotiations between their two countries at the G20 summit. Trump held off additional tariffs on Chinese goods and Xi agreed to buy more U.S. agricultural products. No formal joint statement spelling out the details of how the negotiations will move forward was provided, and given the rocky history of past negotiations, the future path of trade policy between the two countries remains in a fog. This uncertainty, as well as uncertainty with America's other trading partners, is a nightmare that has not yet ended for businesses engaged in international trade.

Tariffs raise the cost of imported goods for American consumers and businesses; these cost shocks have a negative impact on economic activity. The mere possibility of that shock affects the American economy more than many might think.

The president’s on-again, off-again negotiating approach to trade relations hurts the U.S. economy by raising the level of uncertainty over the future course of trade policy. Uncertainty—whether it is due to the normal ups and downs of the business cycle or Washington’s obscure vision of future policy—will inevitably cause businesses both large and small to slow or cancel business expansion plans both here and abroad. Uncertainty reduces prosperity.

Uncertainty over economic policy can be thought of as a lack of clarity over where the path future public policies will lead, in terms of taxes, regulation, government spending, and trade restrictions. Economists Scott Baker, Nicholas Bloom, and Steven Davis have constructed an index that tracks economic uncertainty in the United States and abroad. The raw data for the index come from a computer-based search of articles in major newspapers that discuss uncertainty related to economic policy issues. This data is then transformed into a numerical index. A higher index implies greater economic policy uncertainty (their tracks policy debates well.)

The overall uncertainty index has averaged just above 155 since President Trump won the 2016 presidential election. This compares with an average of 119 during the prior two years. The index has moved over a wider range since President Trump has been in office, suggesting that the president’s stop-and-go approach to managing commercial relationships with our trading partners, and his economic policy in general, has led to a lack of clarity as to future policies.

If you look at U.S. exports, there is empirical evidence that higher levels of trade and economic policy uncertainty depress U.S. exports because of retaliation by Washington’s trading partners. Higher economic policy uncertainty lowers imports by almost a half a percentage point after one year. This reduces product variety and results in higher prices paid by consumers. Moreover, because a little more than half of U.S. imports are intermediate goods (inputs) used to produce final goods in the United States, this affects business costs as well.

My research also suggests that higher economic policy uncertainty lowers direct foreign investment in the United States by almost 5 percent after about one year and increases its volatility as well. A recent United Nations report shows direct foreign investment into the United States declined by 9 percent between 2017 and 2018. The report blames Uncle Sam’s economic policy uncertainty as a principle cause, and none of this is good for economic and job growth, especially in manufacturing.

Hopefully, we’ve reached the beginning of the end of our trade uncertainty. To date, the president has seemed willing to throw away the higher standard of living—about $7,000 per-capita (inflation-adjusted) since the end of World War II—gained from previous tariff reductions and international agreements, because of his misconceptions and poor advice on trade. To avoid attacks on prosperity in the United States, Trump should rethink the behavior that is causing uncertainty and, more fundamentally, change his view on trade.

Robert Krol is an emeritus professor of economics at California State University, Northridge and a senior affiliated scholar with the Mercatus Center at George Mason University. He is author of the Mercatus Center study “Does Uncertainty over Economic Policy Harm Trade, Foreign Investment, and Prosperity?”