Under Pressure: Hong Kong Is Struggling to Survive the Beijing Regime 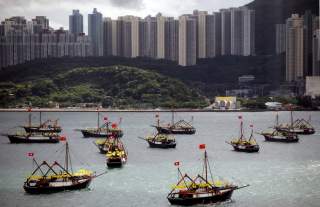 When a Hong Kong resident named Lung arrived at the city’s West Kowloon Express Link Rail Terminal some weeks ago, mainland authorities based there wouldn’t let him go home. Instead, they bundled him back across the border and held him captive till he settled a civil—not criminal—case in a Chinese court. Only then could he resume his journey and return to his residence.

The reason Chinese officials could do this? The Hong Kong government has handed over about a quarter of its largest railway terminal to Beijing’s control; its own laws no longer apply in that space and its police have no jurisdiction.

The official rationale for this: the convenience of all concerned. The West Kowloon Express Link Rail Terminal is now linked to China’s high-speed rail network and passengers there can board for Beijing, Shanghai or other mainland cities. This lets them cross the Hong Kong border smoothly without further formalities. But rather than merely post a few officers to check passports and visas—as the United States does at the Toronto airport, for example—Beijing insisted on total control and the Hong Kong administration ceded its territory without complaint.

For many Hong Kong residents much more than convenience is at stake. They find this just another ongoing example of a supine local government surrendering its rights whenever Beijing authorities decide to impose their will, which happens increasingly often. Though the former British colony is irrevocably a special region of mainland China, it is supposed to be governed by local people “with a high degree of autonomy,” according to terms of the fifty-year agreement that returned sovereignty to Beijing back in 1997. Yet as time passes, more and more Hong Kong citizens see their civil and political liberties being eroded by an increasingly intolerant Beijing regime that has little regard for the rights they believe were promised when the mainland took over. For many, autonomy is more myth than reality.

The West Kowloon Express Link Rail Terminal is merely one glaring example. In addition, the government for the first time has outlawed a political party—a tiny group which contends Hong Kongers should be allowed to advocate self-determination, including in theory independence from China itself. Beijing ordered this ban after labeling its handful of youthful organizers a national-security threat, a potentially violent one and a dangerous precedent for localism in places like Tibet, Xinjiang and Taiwan. (Never mind that this goal for practical reasons is politically and economically impossible for Hong Kong, and has few adherents.) Six elected members of the Legislative Council, the city’s parliament, were denied their seats because they took the official oath in ways authorities found insulting; some weren’t allowed to campaign to regain their lost seats because officials said their attitudes weren’t “sincere.” At Beijing’s insistence, Hong Kong will soon outlaw disrespect of the national anthem; if it echoes the mainland’s version, then any local teenager who boos “The March of the Volunteers” at a soccer match, as some have, could spend three years in jail. And various court decisions cause many lawyers to fear Hong Kong’s revered legal system, based on British common law and central to its role as an international business center, is in jeopardy.

Beyond that, the city’s media faces increasing pressure from Beijing’s local liaison office to practice self-censorship, skipping any reports critical of mainland policies and programs despite a de facto constitution that guarantees a free press. For example, one study found fifty-seven specific examples over the past four years. It also claimed that the central government’s liaison office now owns 80 percent of local bookstores, and purges shelves of works it considers critical of Beijing actions. And the Hong Kong administration for the first time recently refused a visa extension for a locally-based foreign correspondent, the Asia Editor of London’s Financial Times, forcing him to relocate. His crime: presiding over a Foreign Correspondents Club luncheon which featured a speaker who contends Hong Kong citizens should have the right of self-determination (the speaker’s party, since outlawed, was legal at the time).

These and many other examples raise fears among those who value liberal civic standards that Hong Kong’s days as a political outlier are slowly drawing to a close. They fear that China, increasingly authoritarian since President Xi Jinping took command in 2012, is determined to make it “just another Chinese city” rather than a place with promised social, political and legal norms quite separate from the rest of the country. However, if this happens, it could create a fundamental threat to Hong Kong’s continued prosperity.

Thanks to a 1992 act of Congress, the United States treats Hong Kong unlike the rest of China when applying commercial laws and policies. It’s considered a “separate territory in economic and trade matters,” meaning—among other things—that certain dual-use technology (designed mainly for civilian purposes but with potential military applications) can be shipped to Hong Kong though not directly to China proper. Washington also has some 20 separate agreements with the city regarding such items as airline operations, money laundering and counter-narcotic efforts, and their officials meet regularly to tweak these measures. This has helped promote a brisk trade; two-way commerce is about $70 billion yearly, giving the United States a larger surplus ($35 billion) than with any other trading partner. Washington has a “strong interest in the continued vitality, prosperity and stability of Hong Kong,” the 1992 law states.

But there’s a catch. The law also declares an ongoing American interest in the continued health of Hong Kong’s political autonomy, including on human rights issues. The State Department must file an annual report to Congress about all this, with an implied threat that special treatment could end someday if the city’s political freedoms are seriously violated. So far, State has not found the trend dire enough to justify revising the 1992 act that authorizes separate rules for Hong Kong. But recently there have been hints this special status may not endure.

The latest annual report of the U.S.-China Economic and Security Review Commission, a congressionally-mandated body with advisory but not legislative authority, has called attention to this possibility. “Beijing’s statements and legislative actions continue to run counter to China’s promise to uphold Hong Kong’s ‘high degree of autonomy,’” the committee report concluded, adding that “Beijing’s cooperation in upholding its commitments regarding Hong Kong is essential to facilitate a positive U.S.-Hong Kong relationship.” It said congressional delegations should make this point firmly whenever they meet Hong Kong or Beijing officials, especially regarding “freedom of expression and rule of law in Hong Kong.”

But it also made a more pointed recommendation that caught the worried attention of Hong Kong business and political leaders. It said Congress should “direct the U.S. Department of Commerce and other relevant government agencies to prepare . . . a report . . . examining and assessing the adequacy” of American export controls regarding dual-use technology “as it relates to U.S. treatment of Hong Kong and China as separate customs areas.” If followed through, this could lead to new trade restrictions that could undermine the city’s reputation as free port and thriving commercial center, damaging its own economy as well as the economic interests of mainland China.

Hong Kong’s Chief Executive, Carrie Lam, dismissed the suggestion, claiming local autonomy is being honored by China—despite accumulating evidence to the contrary—and that any weakening of its special trade status would have broad and costly consequences. “The U.S. congress and government have to think twice when doing something that is harmful to others as well as themselves,” she warned. But others were less sanguine. Felix Chung, a Legco member and leader of the Liberal Party (a conservative group that, like most business organizations in Hong Kong, supports Beijing policies) promptly withdrew his proposed national-security legislation that opponents fear could be used to crush many forms of political dissent—even though Beijing insists Hong Kong must eventually pass such laws. His reason: “I don’t want to add fuel to the fire, or give ammunition or excuses” to any efforts to weaken America’s special rules regarding his home town’s commerce.

“These are risks I can’t take,” he has explained. “If Hong Kong is treated as just another city in China, you can say Hong Kong is finished.”

And the review commission did cite a real problem, the use of Hong Kong companies to evade international trade sanctions. For example, Hong Kong-registered ships have moved fuel and cargo to North Korea despite United Nations sanctions against such commerce. A Dutch company was denied permission to ship equipment to Hong Kong on grounds that its real destination is Beijing for use in an Orwellian surveillance system it is installing; the Dutch government said the sale would violate Western sanctions. And—most famously—Meng Wangzhou, daughter of Huawei Technologies Co.’s founder, is being held in Vancouver for possible extradition to the United States to face criminal charges; Washington contends she had the mainland’s technology giant use Hong Kong companies to ship American equipment to Iran in violation of American sanctions.

All this could lead to tightening rules about trade in dual-use technology, as the review commission advised, but a major revision of Hong Kong’s special commercial status is not likely anytime soon. That would damage the city’s economy gravely at a time when Washington wants it to prosper as a separate entity; many U.S. and other Western companies would be hurt; and such action would be a serious blow to broader U.S.-China relations which already are fraught. Washington still “pursues cooperation with Hong Kong as a special administrative region of China, in keeping with the U.S.-Hong Kong Policy Act,” a State Department spokesman has assured the city.