An Underground Maginot Line? Gaza's Tunnels Are Not the Future of War 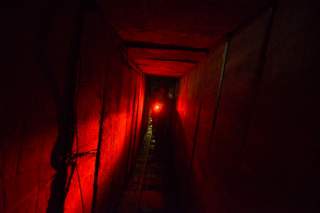 Judging by the furor over Hamas' tunnel network in Gaza, one would expect every insurgent group and irregular army on Earth to grab a shovel and start digging.

Israel knew that Hamas had dug tunnels. Israel was shocked at how many tunnels there were. Hamas had built concrete-lined passages almost seventy feet deep, and wide enough to ride a vehicle through.

Not only were the tunnels a way for Hamas fighters to force the Israelis to play whack-a-mole with gunmen popping in and out from holes in the ground, they also crossed the border into southern Israel, enabling Hamas to attack towns and military bases. In other words, tunnels weren't just a means for the weaker side to level the playing field. They were an offensive weapon for carrying the war into enemy territory.

Hamas picked up the tunnel trick from Hezbollah, whose extensive network in southern Lebanon had frustrated Israeli armor and infantry in the 2006 war. In turn, Hezbollah learned from Iran, whose troops burrowed underground during the long First World War-style trench warfare of the Iran-Iraq War. And now the spade had dug full circle, as Hezbollah and Iran battle Syrian rebels who are busily digging their own tunnels.

Even the United States isn't blind to the threat of tunnels. Last year, the U.S. military asked the defense industry to come up with technologies for fighting in subterranean battlefields. Perhaps there are ghosts roaming the halls of the Pentagon; dim institutional memories of the Viet Cong tunnels at Cu Chi or Japanese tunnels at Iwo Jima.

Forget the smart bombs. We might be in the Age of the Combat Engineer.

Yet before we resign ourselves to being cast into the subsoil depths, there are a few reasons why tunnels may not be the battlefield of the future. Before you can build a subterranean Maginot Line, you need a few ingredients.

First, you need time. These aren't hasty field fortifications dug by an infantry platoon or bomb shelters scooped out by desperate insurgents. They are carefully designed fighting positions. Hamas devoted at least five years to building its tunnel system. If these tunnels are being dug covertly—and to do otherwise would defeat the purpose—then construction is slow and careful.

Second, you need resources and skills. It's not that tunnels have to be expensive and resource-intensive; the prisoners in World War II's "Great Escape" were built with homemade tools and funded by sweat. But Hezbollah's tunnels were furnished with electricity, water pipes and latrines, while Gaza's tunnels are lined with scarce, imported concrete that Hamas diverted from the civilian economy.

Third, these tunnels were also dug in fairly small strips of land like Southern Lebanon and Gaza, well-defined battlefields where the defender could take a good guess at where the invasion routes and military objectives will be.

And finally, the groups that built them controlled the territory. Hamas is the government of Gaza, and Hezbollah is the de facto government of southern Lebanon. They can decide who ventures into their land. They can control transportation routes, and determine the allocation of resources without being accountable to a higher authority.  They may have had to hide the work or smuggle the materials past the Israeli military or UN peacekeepers, but it is much easier to build tunnels when you are the government instead of fighting the government.

So what does this tell us? You can have your underground Maginot Line -- if you have the time, resources and enough control over a territory to minimize outside interference. The question is, how many nations and groups enjoy these advantages, and how will they be able to take advantage of them?

Open field battles between conventional armies would be too fast-paced for tunnels. Trench warfare as in World War I or the Iran-Iraq War would make tunneling viable, but that assumes a long-term static battlefield. For a nation like North Korea, tunnels as offensive or defensive terrain make sense (as long as you have 60 years, unlimited slave labor and a total disregard for your people's living standards). But how many combat zones in the world resemble the DMZ?

Thus tunnel warfare will be used as it always has, as a way for the weaker force to compensate for inferior firepower or numbers. But many nations and insurgent groups will probably lack the necessary ingredients to wage it. Insurgent groups in the African jungle, for example, might not have the means or the skills to build tunnel fighting positions. The Islamic State forces in Iraq and Syria might have the resources, but would spending them on tunnels come at the cost of offensive capability to conquer new territory?

Tunnel warfare also doesn't address a fundamental asymmetry. For all the advantages they confer, and all the ways they allow the weaker force to embarrass the stronger, they are the weak army's strategy. Tunnels impeded Israeli forces, but they didn't stop the IDF from openly operating on the battlefield. It wasn't Israel, but the tunnel builders, who took the brunt of the damage.

This suggests that tunnel warfare may be a useful strategy in certain carefully defined situations. But it will never be a preferred strategy.