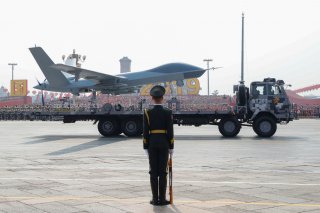 A YEAR into the global pandemic, China’s Two Sessions declared that the Chinese Communist Party (CCP) government was increasing the country’s official defense budget by 6.8 percent in addition to declaring a gross domestic product (GDP) target of plus 6 percent for 2021. At a time of increasing Sino-U.S. tensions, it was reported that China’s top generals also called for greater military spending in order to confront the “Thucydides Trap” with the United States.

As usual, most of the media attention was focused on the increase in the official defense budget—now approaching $209 billion—compared to last year’s rise of 6.6 percent. Given these continued increases in military expenditure, many have inferred that Beijing is becoming more and more inclined to utilize force (or threaten the use of force) to realize its national ambitions.

What is missing in these unsettling inferences that “war is on the horizon” is the larger context. Recent trends in Chinese military expenditures, along with the CCP’s other contemporary pronouncements on national defense, make it clear that the People’s Liberation Army (PLA) sees the present period more as a strategic window whereby it can reorganize and restructure its forces.

CHINA HAS been engaged in an aggressive, multi-decade effort to modernize its armed forces and upgrade its capabilities. On paper at least, the PLA expects to achieve mechanization and make “major progress” toward “informatization” by the early 2020s, achieve “complete military modernization” by 2035, and become a “world-class” military by 2049.

In documenting how the PLA has arrived at this stage, one first needs to be cognizant of the many long years it had taken the PLA to pursue a “double construction” approach of mechanization and “informatization” to concurrently upgrade and digitize itself. This “two-track” approach had called for both the near-term “upgrading of existing equipment combined with the selective introduction of new generations of conventional weapons,” together with a longer-term transformation of the PLA along the lines of the information technologies-led “revolution in military affairs.” Critical to China’s emerging military capabilities is the PLA’s emphasis on “fighting and winning informationized wars,” defined as the process of “using information to conduct joint military operations across the domains of land, sea, air, space, cyberspace, and the electromagnetic spectrum during a conflict.” “Informationization” particularly emphasizes improved capacities for command, control, communications, computing, intelligence, surveillance, and reconnaissance (C4ISR). In that regard, the PLA

But even as the PLA labors to adopt “informationized warfare,” it is already planning for the next phase of its modernization, which it has termed “intelligentized warfare.” This would entail the militarization of the so-called fourth industrial revolution—artificial intelligence, big data, man-machine interfacing, autonomous unmanned systems, 5G networking, and the like—in order to create new dominant military-technological advantages, particularly over the U.S. military. Such intelligentization builds upon the PLA’s earlier phases of mechanization and informatization. As its 2019 defense white paper puts it, “war is evolving in form towards informationized warfare, and intelligent warfare is on the horizon.”

In line with China’s recent defense white papers, the PLA continues to subordinate land operations to sea power and force projection. While the 2015 white paper declared that “[t]he traditional mentality that land outweighs sea must be abandoned, and great importance has to be attached to managing the seas and oceans and protecting maritime rights and interests,” the 2019 iteration states even more explicitly the desired shift away from the PLA’s traditional “Big-Army” mentality.

As regards possible naval deployments, the PLA Navy (PLAN) is rapidly moving from being mainly a brown-water force and becoming a blue-water navy, and as such is improving its capabilities for power projection and maritime joint operations. And as for the PLA Air Force (PLAAF), it is likewise transitioning from territorial air defense to more aggressive operations, improving its capabilities for strategic early warning, air strikes, air and missile defense, and airborne operations.

MOREOVER, THERE is a method to the thinking of the CCP leadership as regards the proportion of GDP allocated for military purposes under its “economic-military development principle.” Ever since reform and opening-up, the PLA’s development has been inextricably linked with the country’s economic fortunes. It is a well-known fact that during China’s initial phases of economic liberalization, the PLA leadership had to defer to Deng Xiaoping’s mandate that the Chinese military subordinate its professional interests to that of the civilian economy and to help it grow.

Thereafter, as the country’s economic development began to take off, the PLA did subsequently receive increasingly greater economic resources (in absolute terms). Indeed, even when Chinese military expenditure as a proportion of GDP began to dip before leveling off to around 1.3 percent on paper since the 2000s, the total economic pie had in fact grown bigger. Given the plus 6 percent GDP stipulated this year—wholly achievable in view of the aberration that is the modest 2.3 percent of last year—the trend-line of around 1.3 percent will likely persist.

In accordance with the regime’s principle of “striving for the coordinated development of national defense and the economy,” as stipulated in the 2019 defense white paper, China’s military expenditure has grown at a fairly consistent rate as a percentage of GDP plus inflation. Thus, as well as being subordinated to the total economic output as seen under Deng, China’s military expenditure post-Deng is also coordinated with total Chinese GDP. As Xi Jinping is only too aware, the former Soviet Union had disintegrated largely due to an over-militarized national economy. The principle of “subordination” and “coordination” can therefore be expected to continue in China—even if the PLA has gained greater prominence under the incumbent Central Military Commission chairman.

GIVEN THE lack of disaggregated data in its annual military budget and how funds have previously been funneled directly from the Chinese State Council towards weapons research, it is no surprise that China’s actual military spending exceeds official figures since they were published in 1978. In recent decades, a number of reliable estimates put its actual expenditure at 1.36 percent greater than the approved versions, although growing evidence suggests that the discrepancy between the two has been decreasing. Regardless, China’s military build-up has been underwritten by considerable sustained growth in the country’s military expenditures for more than two decades and this will continue to be the case.

China’s national approach toward military-technological modernization is driven by two “M’s”: motivation and money. In the first place, China’s civil-military leadership comprised of the CCP and the PLA is united around the central idea that the Party’s armed wing must become a modern, twenty-first-century fighting force—with the regime unwavering in its commitment to modernizing the PLA. Such steadfastness has, in turn, manifested itself in large, steady annual increases in the country’s military expenditures over the years. For several years, in fact, China experienced double-digit annual real growth in its military spending (that is, after taking inflation into account). According to its own official national statistics, the Chinese defense budget from 1999 to 2008 expanded at a rate of 16.2 percent per annum.

This trend remained basically unchanged throughout the second decade of the twenty-first century. Between 2009 and 2020, for instance, Chinese military expenditure grew from $70.3 billion to around $179 billion. Overall, between 1997 and 2020, the PLA budget grew by at least 600 percent, after taking inflation into account. Beijing has never been very forthcoming as to how it spends its defense monies. Chinese defense white papers used to break down spending by personnel, training and sustainment, and equipment (presumably including defense research and development, or R&D). Interestingly, these documents consistently revealed a near-even split among these three categories, that is, approximately one-third to two-fifths of the defense budget going to each of them.

If this same formula were to be applied to the 2021 budget, it would mean that China could spend as much as $70 billion this year just on equipment alone (i.e., procurement and military R&D). Such spending would place the PLA budget for equipment as greater than the combined defense budgets of Japan, India, or any of its other Asia-Pacific rivals. Only the United States spends more on its military.

If anything has supported Beijing’s expansion in military power, it is this rise in defense spending, which has permitted the PLA to significantly increase procurement. At the same time, China has been able to phase out arms imports in favor of home-grown weapons. Consistent and sizable defense budget increases have translated into more money for innovation, procurement, and R&D, as well as greater funds to upgrade its indigenous defense industry with new tools, new computers, and new technical skills. This has also enabled the growth and modernization of the nation’s military-industrial workforce—from its R&D institutes to its factory floor labor force.