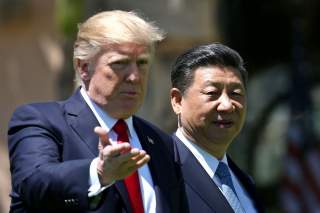 The Sino-American relationship is incredibly complicated today. Not only do China and the United States have the two largest economies in the world, but they also possess the strongest militaries powered by the greatest defense budgets. Both countries are intertwined economically with China holding considerable American debt and America importing vast amounts of Chinese goods. It would be in neither country’s best interest to go to war or to see the other decline. With this economic backdrop, many points of friction still exist militarily, politically, and even economically. How America perceives the threat from China is heavily subjective in nature and is based on ever-changing threat narrative creation within the United States. With a myriad of China threat narratives noisily floating around the court of public opinion, the key going forward will be to distinguish between those threats that will actually bite and those that will not. Surfacing potential sources of domestic bias that impinge upon a more objective view of this threat—as well as recognizing those sources of transparency as strengths—is a powerful place to start.

China’s economic and military prowess has grown over the past two decades with its expanding desire to influence those outside of its borders. While American economic and military prowess is still strong, its desire to influence the world as it once had is receding. In a classic transitioning power dynamic, China is seeking a greater role in the world while the United States is willingly and, in some cases, unwillingly ceding it. As Robert Gilpin famously described in Hegemonic Decline Theory, when one country becomes unable to provide a leading role in the world and another power rises and begins to take the reins, a hegemonic war will take place to correct the disequilibrium. This theoretical framework would suggest a conflict between America and China unless the disequilibrium is addressed to correct the underlying notions of inequality. The Sino-American economic connectivity would, however, preclude this from being a foregone conclusion.

A closer examination of the Sino-American relationship would show that there are both centripetal forces pulling the countries together but also centrifugal forces pulling them apart. These opposing forces make the designation of China as a friend or enemy of the United States extremely difficult with the clichéd frenemy term often used by politicians and pundits. The relative economic decline of America and rise of China is prompting China to covet a larger share of the proverbial international pie. This is contributing to the forces pulling the nations apart. However, the nations have become so intertwined economically that they have in effect hitched their wagons to one another.

Even if these centrifugal and centripetal forces were to offset each other at the systemic level (and this is big if), domestic factors in the United States could serve as the tie breaker. Alan Wolfe once attributed the rise and fall of the Soviet threat in America during the Cold War more to American domestic factors than to Soviet actions. Domestic factors in the United States today could similarly break the systematic “tie” and determine the outcome in the current Sino-American relationship. The key is to identify which forces of domestic bias could arise today in America to influence narrative creation of a Chinese threat. While many narratives exist around China, sources of bias in the justification of the Department of Defense (DoD) budget as well as the anti-China Lobby paint Beijing as a threat. Helping to counter this bias, sources of transparency—the notions of cultural exchange and the rallying around a common cause—help to extinguish perceptions of threat.

The sustenance of the U.S. Defense Budget is a domestic source of bias that paints China as a threat. America’s budget is the largest in the world and outpaces the second largest budget by nearly three times. At $611 billion, the 2017 DoD Budget is roughly equivalent to the next nine largest national defense budgets combined including second place China’s $215 billion budget. Some experts have posited that a large, state actor threat is a requirement to sustain such a sizable U.S. budget. Some have also noted the difficulty in rationalizing such a large American defense budget on a relatively small number of Islamist extremist fighters. The justification of such an extravagant budget requires an adversary with capabilities that are generally in the same ballpark as American capabilities. The furthering of an all-encompassing triple threat (military, economic, and political) from China helps to prop up the rationale for a defense budget that is rapidly approaching $700 billion.

A strong undercurrent exists today in the United States around the mindset of “if it’s Chinese, its bad.” This movement is using the guise of economic protectionism as well as national security. From the painting of the “made in China” slogan as anti-American and unpatriotic to the narratives that China is buying up key U.S. resources such as American ports, the storyline dice have been cast. As China’s export industry took off in the early 2000s, China needed a place to invest to prevent the yuan from rising. China chose U.S. Treasury bonds and luxury American real-estate. In addition to the massive levels of U.S. securities that China began to buy, the most notable luxury real estate purchase was by China’s Anbang Insurance Group of the famous Waldorf Astoria in New York for $2 billion. The transfer of the iconic American property to a Chinese company helped to push this group of Sinophobes to interpret all of China’s actions with a tinge of mal intent. This undercurrent is the manifestation of a modern-day “anti-China Lobby” that seeks to portray itself as part of a larger patriotic movement.

The Other Side of the Narrative Coin—Transparency

Even in the realm of domestic bias which often encourages more negative threat narratives around China, several strong sources of transparency exist. These sources exist at the systemic level and increase clarity around China’s intent, providing a sharper picture of potential threats and fighting misperception.

One source of transparency is the cross-cutting cultural exchange today between the younger generations in China and America. This exchange is truly at the cultural level and spans not only pop culture such as music, food, and movies, but also higher education and the linkages to entrepreneurial start-ups based on enduring connections made in American universities. Narratives abound in this space about how American and Chinese cultural exchanges are growing.

One such narrative in this space centers on the increasing levels of Chinese elite youth attending higher education institutions in the United States. The secondary effects of this development are the growing personal friendships between American and Chinese youth as well the budding business partnerships that grow after they finish school. One expert has noted that many more Chinese are studying in America today than in the past and are developing friendships and subsequent business partnerships with Americans. Chinese elites are sending their children to study in the United States in droves. According to the Institute of International Education, the Ivy League is currently enrolling eight times more Chinese students than a decade ago. This shared education between American and Chinese students has become a primer to shared business ventures in the future, many of which are in Silicon Valley.

A second narrative of exchange exists in the American fast food space. While American fast food chains expanding to China is nothing new, the cultural exchange continues to strengthen as the wave grows. McDonalds and Starbucks have flocked to China in the past but today smaller American food retailers are testing their luck, trying to capitalize on China’s growing interest in Western food. This includes the rising desire for beef and smaller serving sizes being in vogue for the younger Chinese. For example, American food retailer White Castle has added local tastes like the Spicy Tofu burger and Cherry Duck slider to its set menu in China. American food retailers are benefiting from a rise in the Chinese population earning more than 3,000 yuan (U.S. $460) a month which is considered a threshold for when Chinese consumer habits change.

A third narrative around movie exchanges is yet another example of a Sino-American cultural exchange that is exploding. Some major motion pictures that are flops in the United States go on to become wild successes in China. Universal and Comcast’s 2016 movie Warcraft, the largest ever video game adaptation, was a flop in North America making only $47 million, but earned $220 million in China. Another example is the 2017 film Kung Fu Yoga which was made by Chinese producers, starred Jackie Chan, and had a mix of Chinese and English language and music throughout. It was truly a Sino-American collage of both cultures aimed at both markets. Movie and music executive are increasingly looking at Chinese and American markets as potential markets when launching products.

This cross-cultural exchange today is very similar to what took place in the early 1970s between America and China. From Ping Pong Diplomacy through the high-level diplomatic meetings between Kissinger and Deng and Nixon and Mao, spending time together and understanding one another had inherent benefits. Just as 1972 was a watershed moment in improved discourse and cultural exchange, the 2000s and 2010s is a triumph in more open communications between leaders, constant contact between businessmen, and near ubiquitous product exchange.