Understanding China's Fourth Plenum: A Continuation of Foreign Policy by Other Means 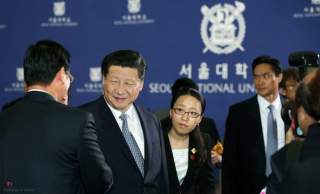 Much of the media attention surrounding China’s recently concluded Fourth Plenum decision has understandably focused on the topic of the party’s approach to law. While the fourth plenum of any Central Committee has traditionally focused on such “party building” topics, it is worth underscoring that they also contain important instructions for every other policy topic. For example, Hu Jintao designated the expansion of international propaganda a major strategic task in 2003, a task the Fourth Plenum of the Sixteenth Party Congress carried the following year. The same 2004 plenum-decision document also carried the strategic directive to “contain Taiwan independence,” an important adjustment that would define PRC policy towards Taiwan for years to come.

CCP and law: Links to policy, values, and authority

Because of the strong linkages between domestic and foreign policy, analysis of the latter necessitates some analysis of the former for context. Much ink has been spilt on the best way to translate the party’s pursuit of the phrase, “to use law to rule the country” (yifa zhiguo), a central theme of the recently concluded Plenum. As others have pointed out, the party’s interest in bolstering the country’s legal infrastructure stems from its pursuit of a more balanced, sustainable model of economic growth and the development of reliable and efficient government and social services to address the root causes of social discontent.

One way to understand the party’s approach to law for domestic policy is to thus recognize that the Chinese Communist Party (CCP) seeks the development and enforcement of laws and institutions under the conditions that these: 1) serve the party’s political objectives; 2) reflect values that reinforce the legitimacy of the CCP’s authority and its political system; and 3) enable China’s leaders to retain final say over the enforcement of the laws. Because of the important implications for foreign policy, these points merit closer examination.

The party’s rule through law starts with its policy objectives. Indeed, Chinese officials routinely depict the party’s policies and the government’s laws as intricately related. At a central work conference on law and politics, Xi explained the CCP’s policies and the country’s laws “both reflect the people’s fundamental will and are essentially in conformity with each other.”

The party’s top strategic priorities remain the elevation in the comprehensive standard of living for the people and the revitalization of the nation as a great power, ideas at the center of Xi’s “China dream.” To achieve these goals, party leaders recognize that they must increase their overall governance ability, which in turn requires a greater reliance on laws, institutions and policy mechanisms. At a workshop on furthering comprehensive reform, Xi stated that the party’s “mission” is to find a “stable and effective” governing system to ensure the nation’s rejuvenation. A People's Daily commentator article has elaborated on this point, explaining that the development of “leadership and organizational systems” is “more fundamental, comprehensive, stable, and long lasting.”

In addition, the CCP regards its system of law as based on a set of values that reaffirms its authority. One scholar explained that a country’s core values represent its "ideological sovereignty." He explained that adherence to the party’s core values provides an “institutional guarantee” that the legal and governance system do not conflict with the political system dominated by the party. Reflecting this point, the CCP in December 2013 issued detailed directives aimed at bolstering socialist core values and promoting the Chinese dream of national rejuvenation. Among the socialist core values sought by the CCP are “national values” of prosperity, democracy, civility, harmony, “freedom, equality, justice, the rule of law.” It also includes “individual values” of “patriotism, dedication, integrity” and friendship.

The belief that laws and institutions should serve the needs of the CCP’s political objectives and reinforce the legitimacy of its political system is reinforced by the principle that the party should control the articulation and implementation of law. This principle can be seen in the idea, captured in the Plenum decision, that the party holds a “leadership position” in all steps of developing and enforcing law. The basic idea is that the party leaders set the policy goals and then develop laws and legal mechanisms to help the party realize its objectives in a stable, efficient manner.

Under these conditions, law is not an alien, “objective” tool of statecraft that can help or hinder the party in realizing its goals. Instead, the CCP views a robust system of laws and institutions as a necessary and useful tool for realizing policy objectives in a manner that reinforces its legitimacy.

However, the Fourth Plenum decision also makes clear that the upholding of international law is contingent upon serving China’s strategic objectives. As an increasingly powerful nation, China is finding the possibility of employing and shaping international laws and institutions an attractive option for maximizing its interests. As Foreign Minister Wang Yi put it, the promotion of international rule of law “serves China’s inevitable needs for peaceful development.” The most important of these strategic objectives remains the imperatives to shape a favorable security environment and to secure core interests.

The imperative to shape a favorable security environment can be seen in the directives to increase involvement in the creation and enforcement of international law and in the instructions to control transnational threats. The fourth plenum directed officials to “vigorously participate in the formulation of international norms” and “strengthen our country’s discourse power and influence in international legal affairs.” The decision also called for expanding involvement in international judicial efforts to target international “terrorists, separatists, and religious extremists,” as defined by Chinese authorities. These instructions reflect broader currents that seek a revision of international norms to favor PRC interests. In one recent speech, Xi declared that the five basic principles of peaceful coexistence have become the “basic norms governing international relations,” as well as the “basic principles of international law.” Reflecting a desire to cultivate political allies to balance against the industrial west, Xi stated that the principles had “effectively upheld the rights and interests of the developing world” and “played a positive role” in building a “more equitable and rational international political and economic order.”

The Plenum also carried directives to use law to “safeguard the country’s sovereignty, security, and developmental interests,” longstanding code for China’s core interests. This suggests China will invest more resources into shaping international norms, principles and laws to better defend China’s right to control its core interests. A symptom of this trend is the Fourth Plenum’s directive to “strengthen international-oriented legal services” and “safeguard the proper interests of [the] country’s citizens and persons abroad.” But the directive also carries important implications for China’s approach to sovereignty disputes with other countries. It is clear Chinese officials do not see greater engagement in international law as a risk to its sovereignty claims. As Xi Jinping has repeatedly emphasized, China has no intent to “compromise [its] core interests.” An improvement in the use of legal and administrative measures merely serves instead to complement the government’s use of economic, civil maritime and military resources to consolidate de facto control of all of its claims.