Understanding the Global Refugee Crisis: A Tale of 3 Myths 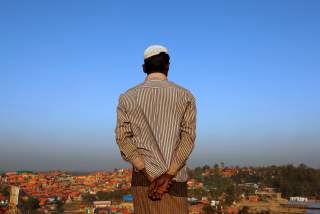 According to UN sources, we are witnessing these days the largest refugee crisis since World War II, as approximately 65 million refugees roam the planet in search of a safe haven and a respite from bedlam. Their massive relocation sends tremors across continents fomenting a “refugee crisis,” and fueling the politics of fear across the globe. I recently returned from a visit to Uganda where I attended an outstanding workshop on refugees organized by Communities Engaging with Difference and Religion (CEDAR), and visited a South Sudan refugee settlement in Northern Uganda. This experience profoundly altered the way I think about the refugee predicament and its ramifications for societies worldwide. The problem is complex and refractory to simplistic generalizations. Three prevalent myths about refugees particularly stand out: That refugees are all powerless and in need of assistance, that the refugee status is short term, and that the refugee issue is primarily the (quasi) legal one of their so-called “human rights.”

Who is a Refugee?

The term ‘refugees’ conjures up the image of destitute victims, escapees from great harm with nary a proverbial “shirt on their back,” hence completely dependent on outside help for survival. Though many refugees match that description, some decidedly do not. According to the UN 1951 Refugee Convention, a refugee “is someone who is unable or unwilling to return to their country of origin owing to a well-founded fear of being persecuted for reasons of race, religion, nationality, membership of a particular social group, or political opinion.” This umbrella definition covers not only destitute refugees but also ones who upon entry into the host country possess substantial military, political and/or economic powers. In the late 1960s, Palestinian refugees into Jordan included heavily armed militias like the Fatah. These began to control the civil life in Jordan, creating there a virtual “state within a state.”  They set up checkpoints at road blocks, illegally levied taxes and publicly humiliated the Jordanian military and police. This came to a crushing end in 1970 with Jordan’s King Hussein declaring martial law and defeating the militias in heavy fighting in which reputedly 3,500 Palestinians lost their lives (an event widely known as the Black September).

Tutsi refugees in Uganda formed a well-trained rebel army that in 1986 brought to power the present Ugandan president, Yoweri Museveni. And in 1994 the same rebel army led by Paul Kagame that subsequently morphed into the Rwandan Patriotic Front (RPF) ended the genocide of the Tutsis in Rwanda and instated Kagame as president. Tutsi refugees in Uganda were often well-to-do, having arrived in the country with their cattle. And wealthy Iraqi refugees in Jordan considerably drove up the real estate prices and the costs of daily living more generally.

In short, the refugee predicament hardly lends itself to a cookie-cutter approach. All refugees aren’t cut of the same cloth. Like any group of people, they vary in their abilities, resources and motivations. Though the adverse circumstances of their plight may particularly stand out—understanding their ultimate impact in realms of politics, economy and psychology requires a more nuanced approach, one that takes their differences into account.

A common assumption about refugees is that their status is temporary and that sooner rather than later they will go back home. This presumption is questionable on both common sense and factual grounds. The refugees’ awaited departure from their host countries is predicated on the expectation that the circumstances that drove them away in the first place exist no longer. Very often this is not the case; if at all, tranquility may return to the refugees’ native land only after decades of strife. By that time, many refugees would have adjusted, one way or another, to conditions in the host country, their children would have been born and raised there, and would have known no other (social, political and cultural) reality than that which prevails there. Their return to the country of origin would entail serious uprooting and readjustment even if and when conditions for their return (i.e., peace and reconciliation) became favorable.

Facts on the ground support this analysis: Whereas refugee camps were originally meant as a stop-gap measure, the average stay for individuals in refugee camps is now an astonishing seventeen years. Palestinian refugees constitute the world’s largest and most long-lasting refugee population. Other examples include Somali refugees in Kenya, who began populating the Dadaab refugee camp in 1991, and have yet to leave; in fact, this camp is still growing. Dadaab now holds nearly 500,000 refugees—including 10,000 third-generation refugees who were born in the camp. If Dadaab was a city, it would be the fourth-largest city in Kenya. Until recently, another example could be found in Calais, France, where migrants first began arriving in 1992. Calais housed “The Jungle,” a refugee encampment in the heart of Europe that at its peak held 10,000 migrants. The Jungle was shuttered and demolished by the French government last year, in part because of the terrible living conditions of the refugees, who lived in makeshift, easily flooded shelters rife with mice and rats. Other examples of long-lasting refugee camps abound. Camps in Pakistan that were founded for Afghan refugees in 1979 have now turned into permanent slums that house almost a million people. In a similar situation, nearly 300,000 refugees from Darfur have lived in a cluster of camps in Chad since 2004. Over 100,000 Bhutanese Lhotshampas have been living in refugee camps in Nepal since 1990. And hundreds of thousands of Burundian refugees fled to Tanzania in 1972, and remained in the country; 162,000 of those refugees were finally granted Tanzanian citizenship in 2008.

In view of these considerations, the assumption that refugees are temporary “guests” about to go home soon is a nonstarter. Nor are refugee camps the solution. Conditions in the camps typically are squalid and serve as a petri dish for militancy and possible radicalization. The Palestinian terror organizations (the Hamas, Fatah, and the Palestinian Islamic Jihad) were born in refugee camps. Kevin White, director of the Jesuit Refugee Service in Uganda, recounted to the CEDAR group how bored and disgruntled youths in Ugandan refugee camps are often eager to join the fight in South Sudan as a form of gainful employment that offers respect. And our own very recent research on Syrian refugees in Jordan, Lebanon, and Turkey suggests that as compared to refugees that managed to make living arrangements outside the camps, the “insiders” were significantly more frustrated, militant, and ready to engage in violence against their perceived enemies. Clearly, the presumption that the refugee situation is short term is unrealistic. Fresh thinking is required to ensure that the supreme humanistic value of assisting people in need is implemented humanely in real world conditions.

What is considered humane treatment of refugees is typically based on the concept of human rights. The Universal Declaration of Human Rights (UDHR) was ratified by the UN General Assembly in 1948 and it

Promises to all the economic, social, political, cultural and civic rights that underpin a life free from want and fear. They are not a reward for good behaviour. They are not country-specific, or particular to a certain era or social group. They are the inalienable entitlements of all people, at all times, and in all places.... Recognition of the inherent dignity and of the equal and inalienable rights of all members of the human family is the foundation of freedom, justice and peace in the world

The UDHR served as the basis for the 1951 Refugee Convention, which constitutes the oldest text on this specific issue. It includes forty-six articles listing the rights of refugees. Among others, these include rights such as: Access to courts, Rationing of food or supplies, Public education, Freedom of movement, and Prohibition of expulsion.

There is no question that the human rights approach to the refugee problem is well intentioned and grounded in commendable humanistic values. Yet from a psychological perspective it is flawed on two related counts: first, the list of so called human rights though commonsensical is, nonetheless, arbitrary rather derived from a well-articulated conception of the human nature and its fundamental needs. Secondly, the rights approach is legalistic, and preventive in focus. It implies a duty and obligation to not allow the refugees’ rights to be violated, thus setting a minimalist standard to be met by governmental and other relevant bodies, rather than identifying a positive ideal for promoting the refugees’ welfare to the utmost.

The science of psychology has identified a set of basic human needs whose fulfillment is a requisite for contentment and well-being. These include physiological needs related to physical survival (like food and water), but also psychological needs like safety, security, love/relatedness, and a sense of significance and respect. It is such set of well-established needs, rather than an arbitrary set of “human rights” that should serve as a blueprint for the treatment of refugees to assure their contentment and constructive adjustment to their host societies.