The Unexpected Wrath of Imran Khan 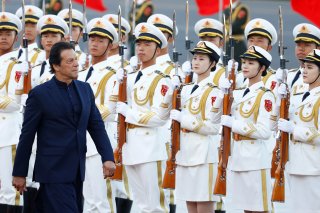 In July 2012, former cricketer-turned-politician Imran Khan described his vision for a Pakistani foreign policy on Twitter. “We stand for a nationalist foreign policy which envisages friendly relations with all on basis of reciprocity & in the interest of Pak,” he said in a social media post. Khan was chair of the populist party Pakistan Tehreek-e-Insaf, which he founded in 1996. While his party placed third in general elections in 2013, losing not only to Nawaz Sharif’s Pakistan Muslim League (Nawaz) but also to Asif Ali Zardari’s center-left Pakistan Peoples Party, the elections solidified his status as an up-and-coming political star.

Sharif became prime minister and, for the following four years until his eventual ouster by the Supreme Court as a result of the Panama Papers scandal, was both an enthusiastic proponent of reviving Pakistan’s long-standing ties to China and a political punching bag for Khan.

Khan decisively won the top spot in Pakistan’s 2018 general elections following Sharif’s fall from grace (and the brief tenure of Sharif ally Shahid Khaqan Abbasi). While Khan plays the populist card and tries to wrap himself as a champion of Pakistani nationalism and Islam, his actions suggest the opposite. By any objective standard, Khan has surpassed Sharif in his willingness to subordinate and sell-out Pakistani sovereignty to Chinese interests. While Khan has lambasted Sharif and appears to despise him, when it comes to China Khan is far more deferential to Beijing than Sharif ever was.

Consider the track-records of both premiers. During Sharif’s first term as prime minister (1990–1993), he visited China twice and convinced its leadership to assist with constructing the Chashma Nuclear Power Complex. He returned to China for a week during his second term (1997–1999), shortly before Pakistan conducted a nuclear test, a successful event to which Islamabad owed much to Beijing. Just a month into his third term (2013–2017), Sharif returned to China and signed eight memorandums of understanding to develop a long-term plan for the China-Pakistan Economic Corridor (CPEC). His rhetorical embrace of China was over-the-top. “Our friendship is higher than the Himalayas and deeper than the deepest sea in the world and sweeter than honey,” he said. Upon his return, Sharif promised to set up a “China cell” in his office to supervise CPEC implementation and, over the remainder of his term, he hosted various implementation meetings for CPEC projects. Khan’s nationalist criticism of Sharif’s obsequiousness toward China ultimately led Pakistan to delay CPEC’s inauguration by several months but, ultimately, Xi Jinping came to Pakistan to sign fifty-one agreements worth $46 billion and formally start CPEC operations. Subsequent deals only added to CPEC’s ambitions and value.

While many bilateral agreements begin with pomp but fade into the ether, both Pakistan and China pushed ahead with their CPEC deals, beginning work on several projects within the year and beginning trade over the new route in October 2016. Shortly before his dismissal, Sharif returned to Beijing for a One Belt, One Road conference. He spoke in glowing terms about his China dealings, saying the projects made “win-win partnerships possible for all” and promised the China deal “would help in eradicating poverty [in Pakistan] and achieving sustainable development, leaving no one behind.” Sartaj Aziz, a prominent Sharif advisor, bluntly stated that the China relationship was “the cornerstone of our foreign policy.”

On July 28, 2017, Pakistan’s Supreme Court disqualified Sharif from office on corruption charges.  It was a victory for Khan who was one of the main petitioners before the court and a frequent street agitator against Sharif who, until the Panama Papers case, appeared a shoo-in for re-election.

For all of Khan’s nationalist and populist rhetoric, however, his legacy has been far more to lay Pakistan under China’s heels. He praised China in his victory speech, and his early promises to review Sharif’s dealings with China went nowhere. Indeed, while Abdul Razak Dawood, Khan’s ministerial-rank commerce and investment advisor, at first explained, “The previous government did a bad job negotiating with China on CPEC—they didn’t do their homework correctly and didn’t negotiate correctly so they gave away a lot,” Khan forced Dawood to backtrack on those comments, and Khan quickly dispensed with his review and instead embraced the Sharif administration’s formulation that “China is the cornerstone of Pakistan’s foreign policy.”

Khan signed agreements to facilitate greater Chinese dominance within the Pakistani economy (with little to suggest that impoverished Pakistanis, especially in disputed areas like Gilgit-Baltistan, would benefit). He also blindly supported China’s crackdown on Uyghur Muslims, which highlighted the emptiness of Khan’s prior and subsequent finger-waving on issues relating to the protection of Muslims and combating Islamophobia. Likewise, Khan’s government stifled an investigation into the sale of more than six hundred girls and women to China as brides.

Khan’s sycophancy only increased in the following months, with Pakistani sovereignty becoming the primary victim. Under Chinese pressure, for example, Khan created the CPEC Authority (CPECA) which enabled Beijing to bypass Pakistan’s National Assembly and Senate. Khan’s administration also provided the China Overseas Ports Holding Company Limited (COPHC) which operates the Gwadar port with a twenty-three-year tax exemption. Sharif and other opposition politicians labeled such concessions illegal under Pakistani law, but Khan pushed ahead anyway in his efforts to appease Chinese interests. And, indeed, such appeasement continued as, in the past year, Khan sold other concessions and assets to China. While Khan has spoken about the relationship as a lifeline to the Pakistani economy, the opposite is true: While Pakistan exports $2 billion worth of goods to China, it imports more than six times as much from China. Cheap Chinese manufacturing and dumped goods continue to erode the Pakistani industrial base.

That Pakistan should have relations with communist China is not the problem. After all, it was through Pakistan’s offices that Nixon-era “Ping Pong” diplomacy and Secretary of State Henry Kissinger’s secret trip to Beijing became possible. There is a qualitative difference, however, between maintaining good neighborly relations and the wholesale betrayal of both Pakistani sovereignty and, given the ongoing genocide against the Uyghurs, Islam as well. Perhaps not since Vidkun Quisling has there been a politician who has so willingly and enthusiastically sold out his country’s sovereignty. Sharif came close, but Khan has surpassed even his example.