The United States and Pakistan: A Marriage Made in Hell 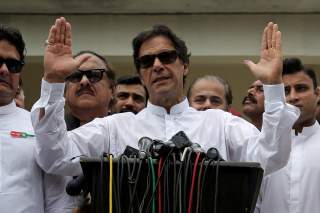 In the last few days the war of words between President Donald Trump and Pakistan Prime Minister Imran Khan has reached unprecedented heights. Trump has declared that Pakistan has “done nothing for the United States” despite receiving aid amounting to $20 billion. Khan has responded by challenging what he called “Trump’s false assertions” that “add insult to the injury Pakistan has suffered in U.S. War on Terror in terms of lives lost and economic costs.”

This exchange has made public the tensions inherent in U.S.-Pakistan relations. The “alliance” between the two countries has rested from the very beginning on flimsy foundations. When it was forged in the 1950s, the objectives of the two allies were totally incompatible. The United States wanted to use Pakistan as a surrogate in the Cold War to contain perceived Soviet expansionism. Pakistan’s main objective was to obtain sophisticated weapons from Washington to neutralize India’s power superiority in South Asia.

It became very clear in the 1960s that Pakistan’s interests diverged completely from that of the United States when, after the Sino-Indian border war of 1962, Pakistan established close political and military relations with Beijing. The U.S.-Pakistan relationship, in the doldrums in the 1960s and 1970s, received a fresh lease of life with the Soviet military intervention in Afghanistan in 1980. Pakistan was once again perceived by the United States as a frontline state in the fight against Soviet expansion. Islamabad willingly acted as a conduit for U.S. arms aid to Afghan insurgents as long as it could skim off a substantial portion of American weapons for its own use against India.

The differences in American and Pakistani objectives relating to the so-called Afghan “jihad” were deliberately glossed over as long as the Soviets remained entrenched in Afghanistan. They came into the open in the early 1990s when the United States disengaged from Afghanistan and Pakistan helped train and arm the Taliban and installed them in power in Kabul. The Taliban provided sanctuary to the virulently anti-Western al-Qaeda, which targeted the American homeland in order to force Washington to end its support for authoritarian pro-Western regimes in the Middle East.

The anti-American objectives of Al Qaeda did not bother Islamabad as long as the Taliban served its interests by providing Pakistan defense in depth in Afghanistan in the event of a future war with India. The terrorist attacks of September 11, 2001, clearly exposed the disjuncture between American and Pakistani objectives. Pakistan, under heavy American pressure, agreed to act as the frontline state in the War on Terror that toppled the Taliban regime. However, while aiding Washington primarily by being the main conduit for American arms and supplies to U.S. and allied forces in Afghanistan, Pakistan provided sanctuary for the Taliban and Al Qaeda leadership, including Osama bin Laden.

The Taliban are Pakistan’s principal instrument for retaining influence in the complex political terrain of Afghanistan. At the same time, they are engaged in a brutal war against the pro-American government in Kabul. Additionally, the Pakistan military has created and continues to support extremist groups, such as the Haqqani network, that routinely carry out terrorist attacks against American targets in Afghanistan. Despite American pressure, Islamabad is unwilling to stop aiding such groups because it wants to hold them in reserve to be used in Afghanistan or Indian-administered Kashmir if and when the need arises.

In light of the historical record and the obvious current disjuncture in American and Pakistani objectives in Afghanistan and vis-à-vis India, which Washington considers a strategic partner in the Indo-Pacific region, it is very surprising that Islamabad and Washington have until now maintained a façade of alliance just as estranged couples preserve the pretense of married life in public. However, the current open spat between Trump and Imran Khan may be the much-awaited signal that divorce is around the corner.