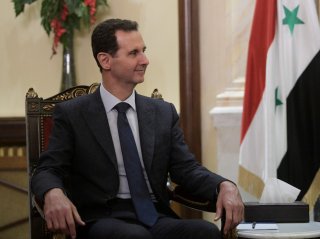 Syria clearly is not on President Joe Biden’s foreign policy priority list, he has yet to mention Syria in any official speech after his first one hundred days in office. Furthermore in the first official communique after the G7 ministerial meeting in London last week, there was no mention of the criticism that Trump administration officials used to routinely issue regarding Arab states' normalization with President Bashar al-Assad. Similarly, despite the regular pleas from the Syrian opposition to Arab states not to reach out to Assad, the actual opposite has happened; there has been a slow but steady upsurge in Arab states reaching out and even actively helping Damascus. The United Arab Emirates has boldly and publicly called out the Cesar Act, with a recent statement saying that it does not help the regional effort to support Syria. The recent Saudi security delegation visit to Damascus has also furthered speculation of increased Arab support backed up by the Russians and even some European states. London-based Syrian journalist Ibrahim Hamidi, who has an inside track with most Western officials dealing with Syria, even wrote that the French went as far as to put pressure on the United States to exclude a public condemnation of Arab rapprochement with Assad. So what are the reasons the United States cannot put further pressure aside from Biden’s lack of interest? The answer lies in Lebanon, Iraq, and even the recent conflict in the Caucasus.

After the collapse of the Lebanese banking system and the Saad al-Hariri detention fiasco, Riyadh had more or less written off Lebanon in its list of priorities; Yemen and Iraq became the main focal point for Crown Prince Mohammed bin Salman. However, Lebanon is simply too important for the Saudis to let it fail. The Saudis have been extremely frustrated as Riyadh watched Iran further entrench its interests in Beirut. Lebanon, in an extremely clichéd manner, is often described as a playground for the rich Gulf monarchs. However, its significance to Saudi Arabia has been extremely important far beyond and pre-dating the time Saudi princes began to frequent the Beirut nightlife. The late Patrick Seale who wrote inside accounts of both the Saudi leadership and the Syrians, in his last book, The Struggle for Arab Independence: Riad el-Solh and the Makers of the Modern Middle East, wrote of the significance of the first Arab nationalists and their fight against the Ottomans and the French. The Maronites of what now constitutes Lebanon and the Sunni and Druze heartland of what is now Syria was at the core of what drove Arabs to some sort of unity even if it was a short-lived pipe dream.

The Saudis have never been under illusion of the importance of a combined stability in Lebanon and Syria. Saudi Arabia has been an active participant in Beirut’s politics ever since Ibn Saud’s opposition to further divisions of historical Syria. During the 1950s and 1960s, the Saudis opposed further entrenchment of former Egyptian President Gamal Abdel Nasser in Lebanon, instead favoring Syrian lordship over the country. After Hafez al-Assad came to power in Syria, the Saudis regularly favored Syrian policies in Lebanon, even if that meant giving the upper hand to an ideological opponent. After Israel’s exit from Lebanon in 2000, Riyadh has repeatedly put aside its differences with Damascus and worked with Bashar al-Assad, just as it did with his father. Syrian economist Amer Al Hussein also points out the key support Saudi Arabia has given to the Syrian banking system and economy despite political differences post 2005: “Many of these Saudi banks still operate inside Syria today and there is a significant Syrian diaspora in Saudi Arabia who travel regularly and are engaged indirectly in the economy, this can be made direct over night with Riyadh’s blessing.”

Basem Shabb, a former Lebanese minister of parliament and close adviser to former Prime Minister Saad Hariri, has written about how Syria has quietly upped its game in mainstream Lebanese politics, which has also meant supporting groups that back Syria rather than Iran’s main agenda in Lebanon. A U.S. State Department assessment last year cited evidence that Damascus was regaining its pre-eminent place in Lebanese politics. The Saudis realize that to balance the Iranians in both Lebanon and Iraq they need Syrian support. Barak Barfi has written before in the National Interest about clear differences between Syria and Iran when it comes to regional affairs despite an undeniably strong security partnership. I have also written for War on the Rocks about how Syria does not follow Iran blindly; in fact, in Iraq and Lebanon, Syria has always supported groups opposed to Tehran’s ambitions. In his recently released memoirs, former Syrian foreign minister and vice president Abdul Halim Khaddam goes into some details of how the Syrians regularly flouted and even attacked Iranian allies when it suited them. It can be argued that, before this war with Saudi support, Damascus maintained a balance to make sure Lebanon does not completely tip into Iranian control. Now the Saudis might want to repeat that as many in Lebanon and United States also see a resurgence of Syrian influence in Lebanon.

Beyond sanctioning Syria and the odd air strike, there is little the Trump administration had in means of policy on Syria. So far, Biden has not appointed an envoy for Syria and is still reviewing his options. Camille Alexandre Otrakji, who specializes in U.S.-Syrian negotiations during the Hafez al-Assad era, told me that,

Lebanon experienced a number of painful cycles of Western challenge to Syrian influence. Through the first phase of every cycle the United States and a number of its allies try to expand their compass at the expense of Syria’s position in Lebanon. They initially succeed, however, ultimately resort to Syria. U.S. Ambassador Jeff Feltman had unmatched influence over Lebanon’s leaders, however, Mr. Feltman could not maintain control over Lebanon’s leadership beyond 2009. The balance of power always prevailed in Lebanon. Syria, weak or strong, is a natural component of that balance.

This is something Patrick Seale noted, and now is occurring again as many Lebanese politicians talk of the return of Syrian influence over Lebanon. Many of the Arab states prefer Syria any day over Iran.

The UAE has already flouted the United States over the Cesar Act. Previously, both Saudi and the UAE stopped a U.S. threat to Assad just after the fall of Saddam. They are now actively helping Syria again. Syria can also look to Greece and Armenia, where historical affinity remains strong as Syria provided shelter to Greeks and Armenians expelled from Ottoman lands. That Damascus is pushing back on Turkish ambitions in the region only serves to strengthen these ties, which will complement the Arab states’ recent security pact with the Greeks. Turkish state-backed media is crying foul over this but can do little as Turkish President Recep Tayyip Erdogan himself retreats and makes amends with the Saudis and Egyptians. The Syrian plan to counter Turkey and Iran in the Levant is being bought in most Arab capitals. History has always shown Damascus to overcome its regular intervals of isolation. The United States shall struggle to stop Arab states from reengaging Assad as part of the regional security matrix.