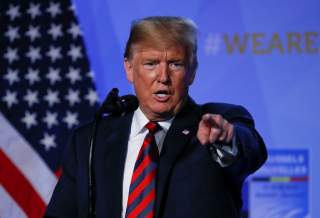 President Donald Trump has rightly recognized that America must do more to stand up to Chinese and Russian threats to U.S. interests. While most agree that having a national security strategy centered around strategic competition is wise and warranted, the administration is falling short in how it is executing that strategy. If the United States wants to retain our competitive edge over our rivals, this administration must embrace and strengthen our greatest assets: our vast network of alliances and commitment to democracy. As Trump heads to Paris this weekend to mark the 100th anniversary of the end of World War I, therefore, he would do well to recognize that supporting strong European allies and transatlantic cohesion will be the best way to counter rising Chinese and Russian influence.

So far, Trump has treated our European allies not as a strength to be developed, but as a problem to be corrected. Actions he views as reasserting American power—levying tariffs, insulting European leaders and labeling the European Union a “foe”—are ironically, hastening its decline. By straining our relationships, Trump is weakening America’s capacity to deter Russia and compete with China. The United States’ withdrawal from the Intermediate-Range Nuclear Forces (INF) Treaty, the Paris Climate Accords and the Joint Comprehensive Plan of Action, widely known as Iran nuclear deal, have repeatedly left Europe and the United States on opposing sides. Trump is operating from an assumption that he can bully our allies into correcting imbalances in our relationships and that our bonds will not suffer. In an era of strategic competition, operating under these assumptions is wrong and dangerous.

Trump’s upcoming trip to Europe provides the president with an opportunity to correct his course. Building strong alliances and partnerships in Europe should be at the heart of any competitive strategy with China and Russia. By 2032 China’s economy will surpass that of the United States. It is also building military capacity that, very soon, will be on par with that of the United States. As China rises, states have two options: they can bond together to balance this growing power, knowing that their collective might and influence are sufficient to contain the rising threat, or they can bandwagon with the hope that by aligning with China they can avoid attack and share the spoils of geopolitical victory. History shows that balancing by coming together with others and forming strong alliances is the best way to avoid becoming a victim. This raises the imperative that Trump ensure continued alignment with Europe in order to balance China’s growing power.

Trump must also come to see that America’s commitment to democracy is key to maintaining our strategic edge. Research shows that not only do democratic countries enjoy unusually good relations with each other, but that democracy is the foundation on which alliances rest. Other ways of building influence, through economic coercion (China) or military might (Russia), for example, are expensive, unsustainable and unpopular. Our ability to shape and influence the world through the power of attraction and shared values, rather than coercion and payments will be key to the United States’ continued, long-term global success.

Trump’s efforts to strengthen transatlantic cohesion are badly needed. Already public opinion polls show that America’s image and standing abroad since Trump took office nearly two years ago have sharply declined. Perceptions of the United States have fared particularly poorly in Europe; just 43 percent of respondents across the European Union held a favorable opinion of the United States, according to a Pew poll published in October. Trump should use this weekend’s visit to reassure Europeans that he values the transatlantic link and places a priority on this relationship. Doing so is more than just lip service. Research shows that perceptions of intent play an especially crucial role in alliance choices. If our allies do not perceive the United States as committed and reliable, they become more likely to align with China or Russia.

If the United States works together with its European allies, it will be well-positioned to compete with China and Russia from a position of greater strength. Strong, resilient democratic societies, and cohesion among them, are among the most effective deterrents against Russian aggression. It is when Russian president Vladimir Putin perceives fissures within democracies and disunity between them that he is most willing to meddle. Greater cohesion between the United States and Europe would also facilitate the development of a much-needed transatlantic strategy on China. Europe has long held mixed views about Chinese intentions but is slowly waking up to the threats that China poses to our shared way of life. That makes Trump’s trip this weekend an auspicious time to start building the unity and the coalitions we need to maintain our competitive edge.

By historical standards, America’s alliances are impressive in their capabilities and unusually cohesive. And while our relationships with Europe are resilient, they are far from indestructible. Rather than viewing our European allies as a problem to be corrected, President Trump should embrace and cultivate these, our greatest assets. Doing so will give us an advantage in the great power competition he has embarked on.

Julie Smith was deputy national security advisor for Vice President Joe Biden and is now in residence at the Bosch Academy in Berlin.

Andrea Kendall-Taylor is the director of the Transatlantic Security Program at CNAS and worked for eight years in the Intelligence Community, including as the deputy national intelligence officer for Russia and Eurasia at the National Intelligence Council.

Image: Reuters. U.S. President Donald Trump gestures as he holds a news conference after participating in the NATO Summit in Brussels, Belgium July 12, 2018​