The United States Has Supplicants, Not Allies 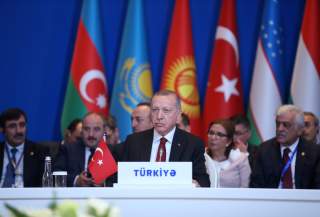 A United States treaty ally is at war with a non-state actor based in the Middle East. But the Trump administration has disavowed America’s friends abroad, concerned only to make a quick exit before the 2020 election season starts in earnest. Congressional foreign-policy heavyweights on both sides of the aisle have lined up to condemn the president, while pundits scream “betrayal” and warn that America’s allies would no longer trust the United States.

The American ally, of course, is Turkey, and the non-state actor with which it is at war is the Kurdish YPG militia in Syria. The Kurdish forces throughout the region are a loose network of terrorists (the PKK in Turkey), irregular militia (the YPG in Syria), and two political party-based armies (the Peshmerga in Iraq). Since 2015, the PKK has killed at least 490 civilians and 1,215 security personnel inside Turkey, according to data compiled by the International Crisis Group.

Since October 9, YPG mortar attacks on targets inside Turkey have killed at least ten civilians and wounded dozens more, and now the YPG is cooperating with the Syrian armed forces.

That is not to say Turkey is right to invade Syria, or that its apparent support for murderous irregular allies of its own is excusable. It’s just to point out that things are more complicated than they seem. In theory, Turkey, which has been a member of NATO since 1951, could invoke Article 5 of the North Atlantic Treaty and appeal for the assistance of all twenty-eight of its NATO allies. After all, Turkey’s recent losses to Kurdish terrorism rival America’s death toll from the 9/11 attacks.

Of course, Turkey is not going to invoke Article 5, since that would be the fastest way to get itself kicked out of NATO altogether. Anyway, these days NATO is more concerned with training and policy than with actual fighting. It is a political organization, not a military one. Few NATO members even maintain the capacity to respond to a military emergency. Even fewer have the political will to do so. None would come to the aid of Turkey.

Alliances are a holdover from nineteenth-century European geopolitics, kept alive by political pundits who have juvenile obsessions with strategy games. The last time they actually mattered was World War I, and that’s hardly a ringing endorsement. For the last hundred years, collaboration in war has been all about politics, not scraps of paper.

That amorphous entity known to TV news as “the Kurds” has successfully aroused American sympathies, and so Trump’s withdrawal from Syria has sparked a popular outcry. Formal alliances don’t even come into play. Between 2014 and 2019, the United States helped the YPG defeat one of its (many) mortal enemies, the Islamic State. The mission has been completed, so the president has apparently decided to cut and run.

The alternative seems to be to stay forever. Without American military support, the YPG would never be able to hold its own against Syria, Iran, Turkey, Arab Islamic militants, and all the rest. Whether the United States withdraws now, or in 2020, or in 2040, the situation will be the same.

If Trump’s abandonment of the YPG is teaching the world that the United States can’t be trusted, then his opponents’ calls for a continued American presence offer an even worse lesson: let no good deed go unpunished. The more American troops are locked into “forever” missions around the world, the harder it will be to convince the American public to do global good in the future.

The world is littered with the remains of unilateral American commitments to protect “friends” around the world, ranging from the good (South Korea) and great (Japan) to the fickle (Philippines) and just plain bad (Saudi Arabia). None of these friends offer any useful protection to the United States in return. They are not in any meaningful sense “allies” of the United States. Supplicants is more like it.

America does have some real security partners: countries like the United Kingdom, Australia, and sometimes France, which have collaborated with the United States on an ad hoc basis to achieve important foreign-policy goals. They are all decidedly junior partners, but valuable all the same. And their collaboration generally occurs outside the scope of any formal treaty. When Britain and Australia signed onto an American-led operation to protect shipping in the Persian Gulf earlier this year, it was a political decision, not a fulfillment of a treaty obligation.

But most countries where the United States provides security guarantees are pure supplicants. The defense of South Korea from the North, Poland from Russia, the Philippines from China, Saudi Arabia from Iran, and—yes—the YPG from Turkey are all unilateral commitments. There are good historical reasons for some of them, and good moral reasons for others and these commitments may (arguably) be in the American national interest. But all of them are much, much more in the counterparties’ interests.

Should the United States have taken on yet another supplicant, and given an open-ended security commitment to the Kurds of northeastern Syria? That’s a political question. The strategic answer seems clear enough: no. But from a strategic point of view, it is also madness to base American troops in South Korea, yet that open-ended commitment is now wrapping up its seventh decade with no end in sight. And why are there still American troops in Germany, deep in the heart of the European Union? In one word: politics.

Donald Trump seems to have calculated that the politics of getting out of Syria outweigh those of staying in. He might be right. Withdraw now, and all may be forgotten by next November. Stay in, and there’s always the chance of another hostage crisis or Black Hawk Down. It took the YPG only a week to make the transition from anti-Assad freedom fighters to pro-Assad regime supporters. A year from now, “betraying” them might look like smart politics indeed.