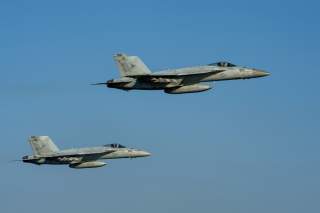 More than a year since engaging in hostilities against ISIS, President Obama formally requested authorization from Congress to use force against the Islamic State. Consequently, Congress is now debating the great issue of whether to authorize America's use of force against the ISIS terror state. As Republicans in Congress consider an authorization, they should first evaluate whether the proposed authority is tailored to facilitate victory and accomplish the Commander-in-Chief's explicit strategic objective: to defeat ISIS.

The President's declared position is that this use of force should be limited by law to three years maximum, including the specious limitation of no "enduring offensive ground combat operations."

Congressional Republicans agree that ISIS is an atrocity, and that Obama's handling of it has been inadequate, but they do not entirely agree on what to do about it. There are two main groups. GOP national security hawks—a group that includes most congressional Republicans when it comes to ISIS—suggest the proposed use of force is too restricting. GOP non-interventionists, like Senator Rand Paul (R-KY), suggest it is not restrictive enough.

This debate also takes place within the context of some dramatic shifts in popular opinion regarding U.S. foreign policy over the last few months.

For much of the Obama era, the American public has been quite skeptical of arguments for military intervention, especially on the ground. President Obama both encouraged that trend and responded to it.

The rise of ISIS, together with its demonstrated brutality, have triggered a sea-change in American popular attitudes, at least on this particular issue. One Quinnipiac poll from March 4 found that 62 percent of all Americans now support the use of U.S. ground troops versus ISIS, as against only 30 percent who oppose. So a two-to-one majority of U.S. public opinion today supports not only the use of force, but the use of American ground troops against the Islamic State. The majorities supporting U.S. airstrikes are even more overwhelming.

One suspects that President Obama, his core supporters, and many of his inner circle find this fierce and unexpected response from the U.S. public toward ISIS rather terrifying. Isn't this the sort of characteristically American, "cowboy" foreign policy reaction Obama was elected to suppress?

Well, yes—and he's doing his best to suppress it. That's what the restrictions on the proposed use of force authorization are supposed to do.

Obama says that his goal is to "degrade, and ultimately destroy ISIS," because Americans insist that he say so. But as so often internationally, his actions have hardly matched his words. As former Secretary of Defense Robert Gates made clear, the policy tools Obama has so far authorized against ISIS in no way match the goal of that group's destruction.

There has been a limited U.S. campaign against ISIS for several months now. It has helped to blunt the group's advance. But in terms of seriously rolling back or destroying ISIS, realistically there is no such prospect on the horizon given current U.S. policies. A key U.S. ally, Jordan, in particular is in grave danger.

Most congressional Republicans would like to see U.S. efforts against ISIS escalated, so that the terror state is rolled back rather than simply contained. And they are honest enough to admit this will require more U.S. troops on the ground.

Obama has actually already placed over 2,000 American troops on the ground since this crisis began last year, including Special Operations troops, to help train and advise Iraqi government forces in their fight against ISIS.

But judging by his actions, the fixed point in Obama's thinking is not so much the destruction of ISIS, as the avoidance of another American ground war in the region. And in fact he says as much. He wants to be given credit for believing in the long-term destruction of ISIS. He wants to avoid another ground war, and he wants credit for that too, especially with his political base. He wants congressional Republican approval for whatever language he puts forward. Yet, he simultaneously wants to be able to accuse those same Republicans of favoring the dreaded "boots on the ground”—even though there are already U.S. boots on the ground in Iraq by his own orders.

In other words the president's main objection to robust Republican criticism of his proposed use of force is, in effect, that such criticism is insufficiently disingenuous, as well as politically inconvenient for him.

But how should Republicans respond? What would an effective American strategy against ISIS look like?

A proper U.S. strategy would start by recognizing the nature of the enemy. By its own description, ISIS looks to recreate an Islamic caliphate commanding the loyalties of Sunni Muslims everywhere. It has an apocalyptic mindset. It looks to expand and erase postcolonial boundaries throughout the region. To an even greater extent than Al Qaeda, ISIS operates on sheer sadism and intimidation. For many of its foreign recruits, sadism is part of the appeal.

ISIS is a terror state, rather than simply a group of terrorists, because it has already taken on many of the qualities of a state. It fields a well-armed, fervent, and well-organized army, collects vast revenues, and occupies an expanse of territory larger than England. In a way, these qualities make ISIS more of a threat than Al Qaeda ever was. At the same time, they leave ISIS with certain vulnerabilities. If territory can be occupied, it can also be taken away. And an army can be defeated in battle.

ISIS cannot be contained, because as its leaders and followers have made very clear, they aim at continuing violent attacks on the citizens of the United States and its allies. The containment of the USSR worked only insofar as Soviet leaders wished to preserve nuclear-armed peace with the United States. ISIS has no interest in any such peace. It will attack until it is destroyed.

An effective U.S. strategy would therefore not only verbalize the destruction of ISIS as a fitting end goal, as Obama has, but implement that goal with some seriousness—and this Obama has not done.

The concern of many is that a U.S.-backed ground war against it, is precisely what ISIS wants—that these sickening videos of beheadings, for example, are deliberately intended to provoke Americans into a ground campaign that then becomes another "bleeding war" by violent jihadists against U.S. forces in the region. Skeptics of intervention against ISIS, including the president, further suggest this will be yet another mistake America—and specifically, Republicans—made in Iraq during 2003.

This is certainly a legitimate concern, but the answer to it is the following. Of course ISIS hopes to defeat the U.S., by whatever tactic it can imagine. But ISIS may get more than it bargained for. The lesson of Iraq 2003 is not that the U.S. must avoid overseas interventions regardless of circumstance. Rather, the proper lesson is that having undertaken a military campaign, as a matter of life and death, it is absolutely incumbent to get it right. Prudence in such matters requires taking great care before intervening, but then doing so, once settled, with full capability, competence, decision and determination. Since Obama incorrectly believes prudence and whole-heartedness to be incompatible in military affairs, he does not understand this simple truth, and probably never will.

In one international crisis after another, Obama operates on the premise that if only the U.S. holds back from robust action, others will step up to fill the gap and promote American interests. After six years of experimentation, we have learned the untruth of this assumption. Iraq's Sunni Arabs do not yearn to be ruled by ISIS. They do however fear ISIS, and they cannot stand up to ISIS without some outside material support. Sunni Arab forces from outside Iraq can and should provide that support. But again, U.S. allies in the region are not impressed when the White House talks yet refuses to get skin in the game. Local populations will rally only if ISIS is physically defeated. And one indispensible actor in ensuring that defeat is the United States of America. This is not simply a matter of regional interests. It's a matter of U.S. interests, because ISIS threatens and kills Americans, as well as threatening regional stability.

A whole-hearted and genuinely prudent campaign against ISIS is not impossible. Thoughtful non-partisan experts in strategy such as Steven Metz of the U.S. Army War College have suggested the United States could participate in a punitive ground expedition against ISIS, not to be tied down in endless nation-building, but to batter ISIS and then withdraw major American combat units.

Obviously this would require extremely careful thought as to what follows any subsequent U.S. drawdown. The outcome of U.S.-backed intervention cannot be simply to empower Shia militias, allied as they are to Iran and hated by Sunni Arabs. Nor is it likely that Iraq is suddenly about to become a flourishing, peaceful, multi-ethnic democracy. We should make no such promises. But from an American point of view, the chief purpose of a U.S.-backed ground campaign would be to push ISIS back from holding vast amounts of territory in the heart of the Middle East that today function as a safe haven for terrorist attacks on the United States and its allies.