Unleashed: The GOP vs. The World 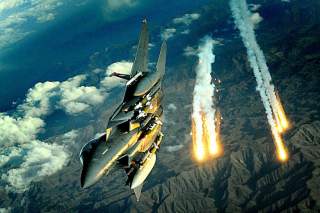 IN FEBUARY 2013, Senator Rand Paul delivered a speech at the Heritage Foundation. It was called “Restoring the Founders’ Vision of Foreign Policy.” In it Paul sought to outline a fresh foreign-policy path for the Republican Party, which was tepidly beginning to debate the limits of intervention abroad. At the outset Paul declared, “I see the world as it is. I am a realist, not a neoconservative, nor an isolationist.” He argued that radical Islam posed a threat to the United States but that the best way to defang it wasn’t to engage in permanent wars in the Middle East. Instead, he invoked the shade of George F. Kennan, asserting that a containment policy toward Iran and other countries would be the most effective way of deterring America’s foes:

Anyone who questions the bipartisan consensus is immediately castigated, rebuked and their patriotism challenged. The most pressing question of the day, Iran developing nuclear weapons, is allowed to have less debate in this country than it receives in Israel.

Paul’s speech did not receive much attention, but the following month his thirteen-hour-long filibuster of John Brennan’s nomination to become CIA director did. Paul became something of a folk hero for his rather sweeping denunciation, on civil-liberties grounds, of the Obama administration’s widespread use of drones to kill suspected terrorists. Paul said he would “speak as long as it takes, until the alarm is sounded from coast to coast that our Constitution is important, that your rights to trial by jury are precious, that no American should be killed by a drone on American soil without first being charged with a crime, without first being found to be guilty by a court.”

Two years later, as the Republican presidential race heats up, however, the GOP is doubling down, whether the issue is government surveillance or confronting foreign adversaries. One possible presidential aspirant at this year’s Conservative Political Action Conference said this about the need to counter the virulent threat posed by the Islamic State: “When I look at spending and what we should spend money on—this or that or national defense—for me, the priority is always national defense. . . . Our freedom is threatened from outside our borders.”

The speaker was Rand Paul. In recent months, Paul seems to have experienced a conversion when it comes to intervention abroad. Paul, who has repeatedly come under heavy fire from neoconservatives, is not simply offering rhetorical bonbons to mollify his detractors, but also refurbishing his foreign-policy stands. And his pivot is meeting with some degree of success: “It’s nice to have a common view from a Republican point of view of the role of national security,” Senator Lindsey Graham told the New York Times. Paul has offered a bill to cut off aid to Palestinians, reversed himself on drones—“If someone comes out of a liquor store with a weapon and fifty dollars in cash, I don’t care if a drone kills him or a policeman kills him”—signed a GOP Senate letter formulated by freshman Senator Tom Cotton whose purpose was to imperil the Obama administration’s attempts to reach a nuclear agreement with Tehran, and proposed boosting defense spending.

WHY IS Paul flip-flopping? Why is former Florida governor Jeb Bush signing on neoconservatives such as Paul Wolfowitz, one of the architects of the Iraq War, while repudiating establishment figures like former secretary of state James Baker? And why is Senator Marco Rubio demanding that President Obama unilaterally halt the “spread of totalitarianism” in China, Cuba, Venezuela, Iran and Russia, among other countries?

Much of the answer can be traced to the fact that the GOP has, over the years, become wedded to a liberation doctrine that essentially allows its champions to present bombing and invading other countries at will as acts of supreme moral virtue. The crucible for that doctrine was the 1950s, when a small insurgency on the right—what Dean Acheson called “the attack of the primitives”—targeted both the Truman and Eisenhower administrations as soft on Communism. After China went red and Stalin’s Soviet Union exploded an atomic bomb, a radical conservative faction, spearheaded by William F. Buckley Jr., declared that the Truman administration had it all wrong. Containment was inadequate, a cowardly recipe for defeat. Eisenhower’s secretary of state, John Foster Dulles, who fired Kennan from the Foreign Service in July 1953, promised nothing less than the rollback of Communism.

As Russian tanks rolled into Budapest in 1956, however, the Eisenhower administration stood pat. Rollback was exposed as so much bluff and bombast. But as Sam Tanenhaus noted in the previous issue of The National Interest, for Senator Barry Goldwater and his admirers the dream remained alive. They went to war—against the liberal Republican establishment that allegedly was intent on appeasing America’s foreign enemies.

In books like The Conscience of a Conservative and Why Not Victory?, Goldwater expounded upon the necessity of confronting foreign bad guys. Goldwater, who was influenced by both Buckley and Gerhart Niemeyer, a fanatical anti-Communist professor at the University of Notre Dame, said that triumphing over Communism was imperative. It was a mistake to regard nuclear war with the Soviet Union as “unthinkable” since that would automatically confer an intolerable advantage on the Kremlin. “A tolerable peace,” Goldwater said, “must follow victory over Communism.”

Goldwater’s political heir was Ronald Reagan. Reagan led the charge against Richard Nixon’s and Henry Kissinger’s promotion of détente with the Soviet Union. In 1976, Reagan, who battled Gerald Ford for the party’s presidential nomination, said at the Republican National Convention in Kansas City that “Henry Kissinger’s recent stewardship of U.S. foreign policy has coincided precisely with the loss of U.S. military supremacy. . . . Under Kissinger and Ford this nation has become No. 2 in military power in a world where it is dangerous—if not fatal—to be second best.” As president, though, Reagan was too cautious and pragmatic to act upon his words. He engaged in an arms buildup, but he also adhered to the terms of the SALT II treaty even though it was never officially ratified by the Senate. What’s more, Reagan relied on proxies rather than attempting to engage directly in regime change, apart from a minor operation in Grenada in 1983. By the end of his term he had signed sweeping arms-control agreements with the Soviet Union. This Reagan, along with his successor, George H. W. Bush (who performed the diplomatic heavy lifting that ended the Cold War peacefully), has been airbrushed out of the picture.

Much of this has occurred because the terrorist attacks of September 11 prompted George W. Bush to revive the militant Goldwater credo. Just as Goldwater had declared that “we must always try to engage the enemy at times and places, and with weapons, of our own choosing,” so Bush said at West Point in June 2002 that containment was “not possible.” Instead, he argued, “We must take the battle to the enemy, disrupt his plans, and confront the worst threats before they emerge.” This remains the lodestar for hawks such as Senators John McCain, Lindsey Graham and Tom Cotton. The Iraq War has proven to be no more than a temporary speed bump for the promoters of a new confrontation with Iran.

In a talk at the Heritage Foundation in January, for example, Cotton revived the Bush-Cheney gospel. Iran is a “radical Islamist tyrannical regime”—which is true but does not distinguish it from a number of other countries in the Middle East. The negotiations with Iran, he said, were a “sham”—which may turn out to be correct but isn’t yet clear. It was time to turn to the military: “Congress can do so not only by imposing new sanctions, but also by offering to transfer advanced weapons like surplus B-52 bombers and 30,000-pound bunker-busting bombs to Israel.”

THIS TRUCULENT disposition is the main driver of Republican foreign policy. Already Republican budget hawks are running up against defense hawks. With off-budget maneuvers being employed in the House of Representatives to bolster the defense budget, it seems unlikely that the former will prevail against the latter. It will be very difficult for any Republican candidate to deviate from orthodoxy during the primaries. The truth is that the triumphalist camp is resurgent, molding and shaping the general tone of the foreign-policy debate.

Nevertheless, the questions that Paul raised a few years ago in his Heritage address about American power and Kennan’s legacy of containment remain pertinent and urgent—even if he himself has stopped raising them. The United States does face some threats from abroad that can’t be stopped simply by diplomacy and require military force. But there is a difference between containing threats and attempting to extirpate them as part of a crusade to end evil. It can never be sufficiently stressed that the injection of a strident moralism into American foreign policy has consistently had pernicious effects, whether it was in World War I, Vietnam or the Iraq War.