The Unlikely Convergence of Russia, Iran, and Turkey 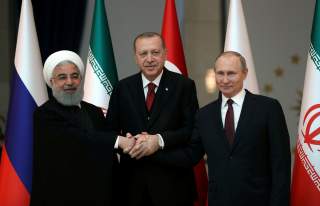 On February 14, 2019, leaders from three of Eurasia’s major powers met at Russia’s Black Sea resort of Sochi to discuss Syria. In attendance were the host, President Vladimir Putin, Turkey’s President Recep Tayyip Erdogan and Iran’s President Hassan Rouhani. While Syria was the main focus of the meeting, the summit represents an important development in Eurasian affairs, the increasing convergence of national interests between Iran, Russia and Turkey. Indeed, it comes at a time when the European Union (EU) and the United States are close to agreeing on new sanctions against Russia, Iran is celebrating forty years of revolution and vowing its defiance to the West by announcing a continued missiles buildup and influencing of regional affairs, and the Erdogan government has launched another round of arrests linked to the failed 2016 coup attempt.

Although this grouping is hardly a close-knit alliance, it provides a counterpoint of sorts to the rise of Chinese power in the East and to a Europe in the West undergoing an identity crisis. It also provides a counterpoint to the United States, which under the Trump administration has indicated an interest in pulling its troops out of Syria and Afghanistan. To be certain, Iran, Russia and Turkey have different objectives in Syria, but they also have overlapping goals in the rest of Eurasia, run the risk of becoming economic extensions of China, and all three have strained relations with the West.

The United States and the European Union have imposed economic sanctions against Russia for its interference in Ukraine and the annexation of Crimea in 2014. They are considering new sanctions in response to Moscow’s aggression against Ukraine in the Sea of Azov. The Trump administration has re-imposed sanctions against Iran and for a brief period it had imposed sanctions against top officials in the Turkish government (later dropped). The costs of sanctions have varied from country to country, but they decidedly hurt Russian and Iranian growth prospects.

Sanctions have been difficult for Iran, which has long found itself frozen out of global economic trade and investment for its engagement in terrorism, development of ballistic and nuclear weapons programs and interference in the affairs of other countries in the region. President Donald Trump’s decision to leave the nuclear deal with Iran negotiated by the Obama administration (the Joint Comprehensive Plan of Action in 2015) has meant a re-imposition of tough U.S. sanctions against Iran, which are squeezing an economy that has been marked in recent years by slow growth, rising inflation, high unemployment and mismanagement. Iran’s currency, the rial, lost considerable value in late 2018, a development that has made imports, including food, more costly.

While Turkey remains a major trade partner for Europe, relations between the two are strained. Ankara’s application for EU membership, initially filed in 1987, has gone nowhere due to concerns over the impact of a large Muslim country entering the trade bloc as well as the large role the military traditionally played in Turkey’s political affairs. The increasingly autocratic nature of President Erdogan’s government has also been a point of friction. At the same time, there was irritation in Turkey over what was deemed to be a slow show of support by the West when the Erdogan government narrowly averted a coup attempt in 2016. Consequently, Turkey looked east, seeking to gain greater influence in the Middle East and Central Asia. In this, relations with Russia and Iran assumed greater importance from a trade and investment perspective. It should also be noted that Turkey also seeks to play a role in those parts of Eastern Europe which still have Muslim minorities (Albania, Bulgaria, Bosnia and Kosovo).

Turkey has also been more willing to consider the purchase of Chinese and Russia arms, which has strained relations with the North Atlantic Treaty Organization (NATO). Indeed, there have been voices that have suggested that Turkey should leave NATO.

While relations have soured with the West, China is another force that has pushed Iran, Russia and Turkey closer. In the early twenty-first century, China is flexing its economic and political muscles as it seeks to revive the old Silk Roads that linked China and Europe in one vast transportation and trade network. China’s Belt and Road Initiative (BRI) as well as its Asia Infrastructure Investment Bank are pumping billions of dollars into roads, railroads, harbors, energy and other areas to transform Eurasia into one large market for Chinese goods and investment as well as making it a zone where Beijing’s influence is dominant.

China has emerged in all three countries as one of the top trade partners; it is the major export market for both Iran and Russia. Equally important, China has pumped considerable foreign direct investment into Iran and Russia. According to the American Enterprise Institute’s China Global Investment Tracker, from 2005 to 2018, Chinese investments in and contracts with Russia were $47.2 billion, with energy accounting for $26.6 billion, followed by metals ($5.8 billion) and transport ($2.1 billion). Over the same period, Iran received $27 billion, led by energy at $11.8 billion, followed by transport at $6.3 billion.

Turkey has also been a focus of Chinese investment, attracting around $15 billion over the same period, led by energy (pipelines and power plants) at $9.5 billion, followed by transport at $2.3 billion. The last was evident by Cosco Pacific’s acquisition of Turkey’s third largest port, Kumport, in Istanbul in September 2015 for $940 million. Turkey is attractive as it being considered by Chinese companies as a logistics hub which could serve as a gateway to Europe and Africa.

Although the Chinese come bearing gifts, they are also a point of concern for Ankara, Moscow and Tehran. In a sense, China represents a massive economic juggernaut across the Eurasian landmass and threatens to overwhelm the three’s spheres of influence, including in Central Asia, the Middle East, and Eastern Europe (key to Russia’s security concerns). Another point of friction is China’s heavy-handed treatment of the Uighurs, a Muslim minority. Although Iran’s and Turkey’s responses to China’s crackdowns on the Uighurs in Xinjiang (the westernmost part of China) have been muted, the issue remains a point of friction. Indeed, Turkey in February called upon China “to respect fundamental human rights of the Uighur Turks and shut down concentration camps.”

In a world where China is rising, the United States is either disengaging or disinterested, Europe is soul-searching, and many parts of Eurasia are contending with difficult political and economic issues (like Afghanistan, Pakistan and Yemen), Iran, Russia and Turkey have found each other. The factor that drove them together is Syria, where efforts began in 2011 to overthrow the al-Assad dictatorship. Although the three powers were initially at odds over the Syrian conflict, with Turkey shooting down a Russian military aircraft in 2015, realpolitik brought Ankara, Moscow and Tehran together.

The common interest in Syria is the need for political stability and getting the U.S. and, for that matter, the smaller French and British contingents, out of the Middle Eastern country, while making certain that the Islamic State does not make a comeback. For Iran, Syria’s importance is based on its leadership being Shia and pro-Tehran as well as being part of a supply chain to another Iranian ally, Hezbollah in Lebanon. It also is a victory in Tehran’s cold war with Saudi Arabia, which has become a major factor throughout the region.

For Russia, Syria is important as it demonstrates that Russia is back as a great power, provides Moscow with warm water ports and air bases from where it can further project its power, and a place where it has been able to test new weapons and give its military battle experience. Iran and Russia would like to see the al-Assad regime re-establish control over the rest of Syria and bring the conflict to an end.

For Turkey, Syria’s strategic significance is due to concerns that the Syrian Kurds, together with other Kurds, could seek to stir Turkish Kurds into a rebellion to seek their own independent state. Fears of a greater Kurdistan have loomed over the region for a long time and were given a more tangible feel by the seizure of autonomy by Iraq’s Kurds, later followed by Syria’s Kurds. Turkey wants a buffer zone between its southeast regions and the Syrian Kurds.

Iran, Russia and Turkey have already held a number of meetings over Syria. At the February 14 summit the major points of discussion were getting the Americans out of eastern Syria and coming up with some way for the al-Assad regime to re-establish control over the Kurdish region. This is likely to be a challenging exercise, but the three powers appear to have a preference for talk, rather than fight, an important development, especially in light of their respective historical experiences.

Syria offers opportunities for the Iran-Russia-Turkey relationship to flounder. The three countries have to carefully weigh outcomes in Syria against the importance of expanding trade and investment relationships, their more common front against what is seen as a meddling West and the seemingly unstoppable economic juggernaut represented by China. The three countries also share concerns over environmental problems, transnational crime and issues further afield, such as taking a common stance against U.S. efforts to promote regime change in Venezuela.