An Unlikely Solution to Russia and Japan's Island Stalemate 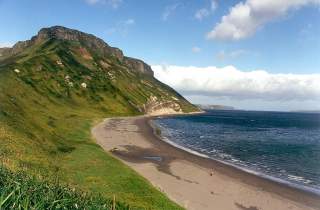 The dispute over the southernmost Kuril Islands—Etorofu/Iturup, Kunashiri/Kunashir, Shikotan and the Habomai Islands—have been a point of tension between Japan and Russia since their seizure by the Soviet Union in 1945. More than seventy years on, Russo-Japanese relations are still abnormal because of the enduring territorial dispute. Historical factors have largely prevented the issue from being settled. These include demography, mentalities, institutions, geography and economy, all of which incentivize hard-line policy positions over compromise. The first four factors promote continued deadlock, while economics in the form of petropolitics holds some hope for a solution.

Russian claims to the Kurils go back to the mid-seventeenth century, through periodic contact with Japan via Hokkaido. In 1821, a de facto boundary was established, with Etorofu being Japanese territory and Russian land beginning at Urup Island. Subsequently, the Treaties of Shimoda (1855) and St. Petersburg (1875) were peacefully agreed upon, with the four currently disputed islands being part of Japan. The final time the Kurils changed hands was at the conclusion of World War II, with the Allied powers effectively agreeing to give the islands to Russia at Yalta in 1945. The dispute became part of Cold War politics during the San Francisco Treaty negotiations, with Article 2c forcing Japan to give up its claims to the entire Kuril chain. However, the Soviet Union’s refusal to sign the agreement left the islands in limbo. In 1956, there was a Soviet-Japanese Joint Declaration that ended the de facto state of war, but failed to resolve the territorial question. Following the ratification of the 1960 U.S.-Japan Security Treaty, further negotiations ceased until the 1990s.

However, with the end of the Cold War in 1991, there seemed to be a new opportunity for settling the issue. Despite the massive upheaval in world affairs, Japan and Russia’s positions on the Kurils have remained relatively unchanged since 1956, because of the five historical factors that transcend the end of the Cold War.

The first factor is demographics. Japan has already seen its population shrink because of low birth rates and aging, while Russia’s population has been declining since 1992 because of alcohol abuse and other social ills. This shift, combined with a decrease in perceived power internationally, has led to backward-looking tendencies, with both nations largely trying to solve the issue by looking to the past and not the future. With this kind of mind-set, it can be argued that Japan and Russia’s aging population restrain Prime Minister Abe Shinzo and President Vladimir Putin’s ability to negotiate because of entrenched views about the Kuril issue.

This also plays into mentality and perceptions of the outside world, which are shaped by how history is taught, the media, and public opinion more broadly. For Russia, the collapse of the Soviet Union was a huge psychological blow, with a loss of status and power as many former Soviet Republics broke away. This dramatically changed Russia’s borders and created great uncertainty about the nation’s future. It is well known that during times of crisis that citizens will often express stronger feelings of patriotism or defensive nationalism. The Kuril dispute fills some of the void left behind in Russia, and serves a way to push back against perceived historical injustices committed by Japan.

Russian perceptions of Japan were largely shaped based on the Kuril issue well into the Cold War. Anti-Japanese propaganda had been common since the 1904–05 Russo-Japanese War, and was reinforced by Japan’s intervention in the Russian Civil War (1918–22). This led many Russians to believe that their prior treaty obligations were nullified as a result. However, Russia’s victory over Japan in World War II cleansed the prior humiliation and cemented the symbolic value of the Kurils, representing (1) the irreversibility of the results of World War II and (2) Russia’s status as a great power. From this viewpoint, giving up territory is tantamount to calling into question the outcome of the war. Thus, possession of the Kurils retains strong psychological importance to Russians.

Japan has been trying to define its place in the world as a “normal” state close to an increasingly powerful China. The return of the Kurils is directly linked to Japan’s national identity, as the last symbol of its defeat in World War II. The Russian attack and seizure of Japan’s “inherent territory” has fed into a victim mentality, which has been a dominant narrative since the war. This is reinforced by the conservative media in Japan, which is often supportive of the government’s foreign policy. Additionally, nationalists often use the media to fiercely attack academics and politicians who hint at compromise on the issue, with little room for movement.

This in turn influences both Japan and Russia’s political institutions. In the 1990s, President Boris Yeltsin’s position was so weak that he feared possible impeachment if the islands were returned to Japan. Concurrently, Russia’s central government was undermined by the rise of regional politicians such as two governors of Sakhalin, Valentin Fedorov (1990–93) and Igor Farkhutdinov (1995–2003), who actively campaigned against the potential sale of the Kurils to Japan. They banked on nationalist sentiment, which proved sufficient to prevent an agreement from being finalized and implemented in the 1990s.

Since President Putin took power, Moscow has brought Russia’s regional governments to heel, but other institutional factors have also contributed to the continued stalemate. One example of this is the idea that an issue or problem is ripe for resolution. During Putin’s initial period as Russia’s president he had the capacity, but not the will, to negotiate with Japan over the Kurils. Instead, he chose to expend time and energy on resolving the Sino-Russian border dispute at the expense of the Kurils issue. Following his return to power in 2013, Putin has become increasingly dependent on nationalist support to maintain his rule, and is unlikely to yield on the Kurils in any meaning way. The recent situation in Crimea and Ukraine clearly demonstrates how far Putin is willing to go to defend Russia’s national status.

Japanese political institutions, though different from Russia’s, have also promoted hard-line negotiating behavior regarding the Kurils. Following democratic reforms after World War II, Japan has been dominated by the Liberal Democratic Party. With the exceptions of 1993–95 and 2009–12, the LDP has held a majority in the national Diet, effectively making its party platform for the return of the four southern islands national policy since 1956. Also, following the crash of the real estate market in 1990–91, the LDP has only produced two effective prime ministers: Junichiro Koizumi and Shinzo Abe, both of whom have depended on nationalist support to hold office. Finally, regional politics in Japan plays an important role, with elected officials from Hokkaido pushing the Japanese government to be assertive on the dispute. Taken together, these factors disincentivize any compromise that doesn’t see the return of all four islands.

Sakhalin and Hokkaido highlight the importance of geography and regional interests in the dispute. Geography influences how people see the world and the development and implementation of policies. Russia’s most pressing interests are in Europe, then the Middle East and Central Asia, finally followed by relations with Japan. One example of this is that much of Russia’s time and energy is taken up with concerns over NATO expansion into eastern Europe and the continued fallout from Crimea and Ukraine. For Japan, the U.S. alliance, China and the Korean peninsula take on a higher priority than relations with Russia. The Japanese government also has to contend with public pressure to resolve issues with North Korea concerning abductees and nuclear weapons, which Abe has promised to do repeatedly. The result is that the Kurils are often on the back burner.

Perhaps the only factor that promotes potential settlement of the Kurils issue is economic interests. Since 1991, both Japan and Russia have run into prolonged economic difficulties. The Russian economy bottomed out during the 1997 ruble crisis and has been struggling due to the drop in oil prices and economic sanctions. However, oil and gas development in Siberia pairing Japanese capital with Russian natural resources promotes cooperation and possible resolution of the Kurils issue. Even despite recent sanctions, 8 percent of Japan’s oil was imported from Russia in 2014, in large part due to increased use of oil and natural gas following the Fukushima nuclear disaster.

Taken together, historical factors largely suggest a continued stalemate over the Kurils. Japan and Russia’s demographics, geography, political institutions and the perceptions of their citizens all promote the hard-line negotiating positions. Petro-politics offer some incentives for the two nations to resolve the issue and normalize relationships. However, that has thus far proven insufficient to break the deadlock. Even with changing leaders around the world, it seems that the underlying factors that have locked the dispute in a stalemate are more likely than not to remain in place.

Michael Buckalew is a member of the Council on Asian Affairs. He received an MA in International Studies with a concentration in International Peace and Security from Korea University in Seoul, South Korea, and a BA in History and Political Science at Arcadia University. The views and opinions expressed in this article are strictly those of the author in his personal capacity and do not necessarily reflect the views of any organizations which he is affiliated with.