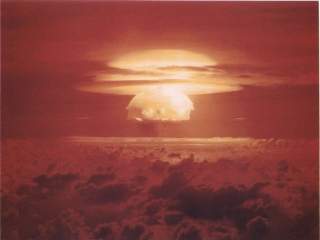 Why does China develop weapons systems that it opposes? China criticizes U.S. ballistic missile defense (BMD) systems, but conducted three BMD tests of its own from 2010 to 2014. China regularly supports a treaty to ban space weapons, but has repeatedly tested an anti-satellite (ASAT) system. It is also unclear how China’s nascent hypersonic glide vehicle (HGV), reportedly designated the WU-14, might fit into its military doctrine. In general, China’s rapid military modernization and opaque defense budget only exacerbate concerns over the compatibility between China’s stated views and actual practice in developing strategic weapons.

One way to answer this puzzle is to look at history, specifically the history of China’s neutron bomb program. From 1977 to 1988 China developed a neutron bomb, more formally known as an enhanced radiation weapon. Neutron bombs are specialized tactical nuclear weapons (TNW) with reduced blast effects and enhanced radiation. Similar to the BMD and ASAT puzzles, this weapon appears incompatible with China’s stated nuclear doctrine. China’s no first use doctrine emphasizes strategic forces and responding only to a nuclear attack, whereas a neutron bomb is tactical and ideal for first use against conventional forces.

The puzzle deepens because there is no evidence that China ever deployed a neutron bomb. Declassified U.S. intelligence and Chinese press reports indicate the PRC developed and tested this capability, but give no indication of deployment. The timing is odd too, as China was impoverished in the 1970s but still chose to develop an expensive weapon like the neutron bomb. It waited until 1988 to test a final design, after relations with the Soviet Union (the presumed adversary during the program) had improved.

My new National Defense University monograph uses primary sources such as biographies of Chinese nuclear weapons scientists, press reports, and technical articles to answer these questions. These sources allow us to reconstruct the neutron bomb program’s history and assess what drove decisions throughout the program. As a case study China’s neutron bomb program contributes to broader discussions about China’s weapons development decision making then and now.

The neutron bomb case study suggests a model of a “technology reserve,” in which China develops a weapons technology to match the capabilities of another state, but defers deployment and keeps them in reserve. The longer report also considers how this model might apply to China’s decision-making on BMD, ASAT, and HGV systems. To assess the drivers behind Chinese decisions, the report uses five variables as an analytical framework:

3.     The neutron bomb’s normative value – Would a neutron bomb enhance China’s international prestige, or lead to opprobrium because of a taboo against the weapon?

4.     Resource demands – What were the political, financial, material, and personnel demands for this weapon?

5.     Technological feasibility – What were the challenges for developing and producing a neutron bomb, and how did Chinese scientists address them?

A final intervening variable is coalition politics. Champions and opponents of any weapons program can greatly affect decisions. In the case of China’s neutron bomb, General Zhang Aiping was a key advocate for the weapon. With these variables in mind, China’s neutron bomb program followed three stages.

In 1977 Chinese media followed the controversy over the U.S. decision to develop and deploy the neutron bomb in Europe. Soviet media denounced the U.S. neutron bomb as the “perfect capitalist weapon,” and pressed China to also condemn it. Instead Chinese media kept a neutral tone, making the Soviets more alarmed over Beijing’s “silence.” On September 21, 1977 Chinese General Zhang Aiping broke the silence with—of all things—a poem in the state-run newspaper People’s Daily:

Steel alloys are not strong, and

Neutron bombs are not difficult.

When heroes study the sciences intensely,

They can storm all earth’s strategic passes.

At this point Chinese leaders had already ordered initial research into the neutron bomb. Regarding their motivations, one scientist recalled Deng’s statement in 1966 “What others have already done, we also must do; what others have not yet done, we certainly must also do.” The message was clear—if other countries had the neutron bomb so should China. Some scientists initially opposed developing a neutron bomb, because they worried such a program would disrupt higher priority work in miniaturizing nuclear warheads for use on missiles. Ultimately they acquiesced, knowing they no longer held the same political clout they once had, and that Chinese leaders were prioritizing conventional instead of nuclear weapons.

In 1980 General Zhang Aiping told a member of a visiting U.S. delegation that China needed the neutron bomb against the Soviets. Chinese media also followed France’s neutron bomb development and considered it a symbol of the country’s “great power status” (大国地位). On a technical level, the weaponeers decided neutron bombs and miniaturized warheads (which they were already working on) shared enough common principles that they could combine the two programs into one. Doing so, they divided the neutron bomb problem into constituent parts, or “principles,” and solved them individually. From 1982 to 1984, China conducted five tests related to the ERW and warhead miniaturization.  These tests culminated in a successful “principles breakthrough” test on December 19, 1984, which one weaponeer described in a poem as “the second generation of light boats has passed the bridge.” It appears the “second generation” referred to neutron bombs and miniaturized warheads.

In 1985 China halted nuclear testing for 30 months. The pause coincided with a Soviet moratorium on testing and a leadership reshuffle that neutralized neutron bomb proponent General Zhang Aiping. At this point France had also decided against deploying a neutron bomb, solidifying a taboo against the weapon. Nuclear weapons scientists were aware of the international and domestic political challenges to continuing their work. In 1986 they warned PRC leaders that the United States and Soviet Union could conclude a nuclear test ban treaty that would prevent China from modernizing its nuclear arsenal. They proposed accelerated testing to complete new warhead designs, effectively making a “now or never” argument. If China did not complete new warheads soon, it would be at a long-term disadvantage.

Chinese leaders approved the report, and on September 29, 1988, China successfully tested a neutron bomb design. Before doing so a senior weapons scientist Liu Huaqiu wrote two interesting reports. Liu argued China did not need a neutron bomb, but should test a design anyway to put in China’s “technology reserve.”

What produced the neutron bomb’s outcome of development without deployment, and to what extent do these variables apply today? Strategic concerns and PRC leaders’ desire to match capabilities were key to the initial decision. Zhang Aiping’s political rise and scientists’ “principles” approach sustained the program, but later a receding Soviet threat and Zhang’s retirement stalled it. Yet despite these setbacks, scientists’ argument of “now or never” compelled Chinese leaders to test a final design to keep in a “technology reserve.” The case study also helps frame analyses of other states’ nuclear weapons programs. For example, the scientists’ “principles” approach demonstrated how a state with limited resources may approach development of a complex weapon system.

This case study’s framework and final model are useful for discussions of China’s current weapons systems under development, such as its HGV. HGVs glide through the atmosphere at hypersonic speeds and could be more survivable against BMD systems. Possible drivers for developing this system include its strategic value if the PRC believes the system can defeat U.S. missile defense systems and the normative value of being first to develop an advanced system. Future analyses could include assessments of coalitions advocating the weapon and its technological principles. An immediate recommendation is that instead of panicking over such systems, such as Soviet media did in reaction to China’s neutron bomb, calmer assessments are more constructive.

The longer report covers in greater detail the variables, program specifics, personnel, and conclusions. A good final note here concerns methodology on two fronts. First, the analytical framework of variables facilitates the systematic assessment of drivers throughout the program, and is useful for contemporary analysis of other advanced weapons programs. Second, Chinese primary sources ranging from biographies to social media can be incredibly valuable for deciphering China’s decisions on weapons programs. These points should be useful for today’s China hands and nuclear wonks tackling other security puzzles.

Jonathan Ray is a Research Associate at Defense Group Inc. (DGI), where he conducts research and analysis using Chinese-language sources on foreign policy, national security, and science and technology issues. Previously he was a contract researcher at the National Defense University, where he wrote Red China's “Capitalist Bomb": Inside the Chinese Neutron Bomb Program, from which this piece is adapted.