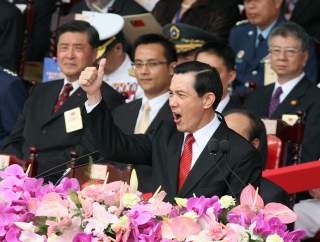 Mao Zedong reportedly once said that warfare is 70 percent political. Arguably, no conflict in recent times has adhered to this concept more faithfully than China’s ongoing campaign to “reunite” Taiwan with the “Mainland.” While analysts have tended to focus on the threat which an increasingly powerful People’s Liberation Army (PLA) poses to the democratic island-nation, the political warfare component of Beijing’s “reunification” strategy has received much less attention, perhaps because cross-strait symposia on tea and culture are far less “newsworthy” than the latest missile boat or combat aircraft.

Given Beijing’s preference for “nonkinetic” solutions to the impasse (war would be costly and unpredictable), it makes perfect sense that its leadership would explore alternative means by which to win the war in the Taiwan Strait. Political warfare (or the “Three Warfares,” 三战), targeting both Taiwan and its supporters in the international community, is a favored instrument. There has been a growing number of interactions between Taiwan and China since 2008. And what with rapidly expanding cross-strait travel, academic exchanges and investment, the opportunities for China to engage in political warfare have increased exponentially.

Art and culture, benign as they may sound, are at the heart of China’s political-warfare strategy against Taiwan. But don’t be fooled by the innocuous façade provided by the cushy conference halls and beaming university students: Behind all this lies the PLA’s General Political Department Liaison Department (GPD/LD), “an interlocking directorate that operates at the nexus of politics, finance, military operations, and intelligence.”

Although the GPD/LD’s remit extends well beyond Taiwan, a large share of its resources is nevertheless committed to resolving the Taiwan “question” on terms that are favorable to Beijing.

The list of Chinese units that engage in or provide cover for political warfare against Taiwan is admittedly a long one. However, one organization that has gained prominence in recent years is the China Energy Fund Committee (CEFC, 中华能源基金委员会), a Hong Kong–registered nongovernmental organization that advertises itself as a think tank (not to be confused with the French CEFC, where I am an associate researcher). A subsidiary of the CEFC China Energy Co., Ltd (Huaxin, 中国华信), the CEFC claims to have “partnerships” with several organizations and government bodies worldwide, including a number of Chinese universities, Hanban, oil companies, Rand Corp, the Privy Council’s Office of Canada, and the United Nations Economic and Social Council (ECOSOC).

The board chairman of the CEFC is Ye Jianming (叶简明), who is also listed as a founder of the aforementioned Huaxin, a multibillion-dollar energy logistics company (its reported income in 2013 stood at 209 billion renminbi, or US$33.4 billion) with several offices worldwide, including one on the twenty-first floor of the Taipei 101 skyscraper. Not much is known about the thirty-eight-year-old Ye. We know that he was deputy secretary general of the GPD/LD-linked China Association for International Friendly Contacts (CAIFC) from 2003-2005. According to journalists Andrew Chubb and John Garnaut, he may be related to Lt.-Gen. Ye Xuanning, GPD/LD director until 1998, or to Admiral Ye Fei, the PLA Navy commander from 1980 to 1982.

One subsidiary of the CEFC that is of particular interest is the China Institute of Culture Limited (CIOC, 中国文化院). Registered in 2012 (also in Hong Kong), the CIOC is a nationally supported organization in charge of “promoting Chinese culture.” Since its inception, the CIOC has organized—in both China and Taiwan—a series of cross-strait cultural events involving students, academics, entertainers and religious figures from both sides of the Taiwan Strait.

On the Taiwan side, the pro-Beijing Want Want China Times Group and pro-unification Fo Guang Shan Foundation for Buddhist Culture and Education (佛光山文教基金會) have sponsored events. Both, for example, were co-sponsors of the “University Students’ Culture Experiencing Camp,” held in Kaohsiung, southern Taiwan, in January 2015. According to Forbes magazine, Tsai Eng-meng (蔡衍明), chairman of the Want Want China Times Group, is the richest man in Taiwan, with a fortune of US$8 billion.

Other events, such as the “Promoting Cultural Integration and Increasing Cultural Identity” salon held in Fuzhou, Fujian Province in October 2014, were co-organized by the CEFC and China Huayi Broadcasting Corp (CHBC, 中国华艺广播公司), which was incorporated by the GPD in 1991. And that’s where the constellation of affiliated organizations and operatives gets really interesting. The chief executive officer of CHBC, Wang Shu (汪澍/王树), also happens to be commander of GPD 311 Base (61716 Unit). The Base is managed by the Huaxin Training Center (华信培训中心), which itself is funded by the Fujian Huaxin (CEFC) Holding Company, a subsidiary of the US$30 billion CEFC China Energy Co discussed earlier. Confused yet? It gets even more complex. Lan Huasheng (兰华升), the general manager of Fujian Huaxin Holding Company, is also CEFC deputy secretary general, executive director of the CIOC, and an active participant at many of the cultural forums held between the two sides of the Taiwan Strait since 2013. His speech at a CIOC/CHBC forum in October 2014 was titled “Four Districts of Cross-Straits: Sharing the Same Root, Achieving the Same Goal.”

According to Stokes and Hsiao, the Fuzhou-based 311 Base is “[a]t the forefront of applied psychological operations and propaganda directed against Taiwan.” Wang was present at the aforementioned salon (he is fourth from left in the third picture in the hyperlink above; the man to his right is Xu Jialu [许嘉璐], who is associated with CAIFC, CEFC, Confucius Institutes, and president of the Nishan Forum on World Civilizations (尼山世界文明论坛), which overlaps with several GPD/LD organizations, including CEFC. Xu is also chairman of the China Association for the Promotion of Culture (CAPCC, 中华文化发展促进会), an organization that is actively involved in the promotion of a cross-strait “peace accord” and “re-unification.” It is claimed that Xu “orchestrates” China’s overall political-warfare strategy.

The significance of 311 Base (also known as the Public Opinion, Psychological Operations, and Legal Warfare Base, 舆论战心理战法律战基地) cannot be overstated. As a deputy-corps-level organization, 311 “carries roughly as much status as all those six conventional missile brigades [from the Second Artillery Corps’ Base 52] that target Taiwan combined,” Stokes wrote in an e-mail response. The base is also actively involved in cyber operations.

It should be clear by now that the CEFC and its affiliates, which are joining forces with extraordinarily rich partners in Taiwan, have formidable financial resources at their disposal to engage in political warfare in Taiwan, to shape the discourse and possibly to recruit individuals. The convoluted nature of the network—where global energy firms overlap with think tanks, foundations, the GPD/LD and intelligence operatives—makes it extraordinarily difficult for intelligence agencies (and the less security-aware targets) to distinguish between political warfare and more “legitimate” activities. Given what we know about CEFC China Energy Co and the many GPD/LD-related subsidiaries whose operations it finances, it is difficult to imagine that its office in Taipei is not involved in political warfare.

The CEFC is just one of the many Chinese organizations that engage in such activities in Taiwan, Hong Kong and globally. While it barely scratches the surface, this article demonstrates how China uses an “onion layer” strategy to deceive and overwhelm its adversaries. Multiply the CEFC phenomenon by ten, twenty, fifty, and the task of countering those efforts becomes a nearly impossible one.