Unthinkable: If America Walked Away from Asia 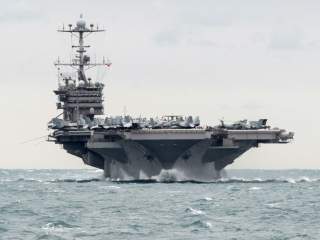 China’s ‘rise’ in Asia is creating considerable tension with Washington and its allies. There are disputes in the East and South China Seas, heated rhetoric over freedom of navigation operations, economic competition, a growing ‘access’ challenge pitting Chinese A2/AD vs. American Air-Sea Battle/JAM-GC—the laundry list these days seems almost endless.

So what should America do about it? One idea, boldly put forward by the talented John Glaser in a recent piece in these very pages, is to “abandon our strategy of primacy” and that “the United States can relinquish its outsized hegemonic role in East Asia without damaging its core interests.”

“China threatens the United States only insofar as America insists on being the dominant power in China’s backyard, a policy that actually contributes very little to U.S. security. If we abandon our strategy of primacy, the risk of a clash will shrink away. If we try to contain China’s rise, on the other hand, these predictions of doom may prove right.”

“The current approach to China boils down to a kind of measured containment. It manifests in essentially in three ways:

3) further integrating U.S. economic engagement in the region in a way that marginalizes, and in some cases excludes, China.”

After reading this I had a very simple rhetorical question: Why is America doing these three things in the first place? A short list (and not even a comprehensive one), for your reading pleasure below, makes this obvious:

- With double digit budget increases almost every year for the last twenty years, China is building a military that by many people’s estimate is focused at defeating America in combat.

- Seizing Scarborough Shoal from the Philippines after backing away from a U.S.-brokered agreement to deescalate tensions.

- Time and time again, effectively declaring the South China Sea its own territory—a body of water that is among the world’s most important in terms of trade transiting its space (over $5 trillion worth, with over $1 trillion being U.S. goods).

- And now creating fake islands in the South China Sea—islands Beijing could use to effectively enforce its sovereignty claims.

The above—with China casting aside the idea of a ‘peaceful rise’—has forced America to do the bare minimum to ensure the continuity of its so-called ‘primacy’ but also something much more important that Glaser sadly ‘glazes’ over: the international order in Asia. Keep in mind; this is an order that has been devoid of major great power war since the end of World War II—a peace and prosperity that has allowed China to become the world’s second largest economy (if we use GDP as the measure). In fact, while we are on the subject, America has been one of the greatest advocates of China’s rise, something multiple administrations have encouraged. Chinese coercion on countless occasions has pushed America to change its thinking—in some instances almost kicking and screaming considering Beijing and Washington enjoy an almost $600 billion dollar bilateral trade relationship. Simply stated: China has changed the rules of the game, so Washington has responded.

And what’s so bad about America’s so-called primacy in Asia in the first place? Glaser, at least in my view, makes it sound like the Asia-Pacific is some large American vassal state that it should relinquish control of. It should be clear for anyone to see that Washington is the provider of many important net public goods—like those all-important security alliances, nuclear umbrellas and protected sea lanes that allow trade to thrive. As former Under Secretary of Defense for Policy Eric Edelman points out:

“The concept of Primacy has underpinned U.S. grand strategy since the end of the Cold War because no other nation was able to provide the collective public goods that have upheld the security of the international system and enabled a period of dramatically increased global economic activity and prosperity. Both the United States and the global system have benefitted from that circumstance.”

But what happens when America gives up its so-called primacy in Asia? Glaser never defines what the end of American primacy in Asia would look like. What are the specifics? Does Washington simply walk away from treaty commitments and alliance guarantees to Japan, South Korea, Taiwan and the Philippines? What about growing strategic relations with Vietnam and India? Does America simply say “sorry” and begin withdrawing its forces from the region? Or does America offer some sort of “grand bargain” to Beijing, where Washington holds a sphere of influence from the shores of California to Hawaii with China holding the rest? What would be the ramifications globally? Could you really imagine President Obama walking up to a microphone and proposing any of this?

As a senior Taiwanese official explained to me when I was in Taipei this fall: “We want more America, not less. Washington is the only thing that ensures China’s rise is not Asia’s nightmare or that we don’t become another Hong Kong.” Each time in the last three years I went to Asia, every senior official I spoke with wanted more American leadership, more American commitment and even more American resolve to face down the challenge of a ‘rising’ China who is constantly threatening to overturn the status quo—time and time again. Just imagine if America walked away from Asia, the thought is too frightening to imagine and the damage to our credibility certainly unfixable. That is why approach proposed by Mr. Glaser should be relegated to what is—fantasy.