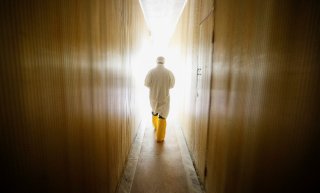 In their 1992 book, Ecocide in the USSR, Murray Feshbach and Alfred Friendly Jr. stated that “no other industrial civilization so systematically and so long poisoned its land, air, and people.” A well-known example of the parlous and perilous state of environmental protection in the USSR is the Chernobyl nuclear disaster, which occurred on April 26, 1986. The nuclear disaster centered around reactor four of the Chernobyl Nuclear Power Plant. What most people probably don’t know is that this nuclear power plant proudly bore the official name Vladimir Lenin Nuclear Power Plant (Чернобыльская АЭС им. В. И. Ленина) in honor of the communist state founder. It was only after the accident that Chernobyl became synonymous with the general “dangers” of nuclear energy rather than the environmental hazards allowed to run rampant under socialism.

In his definitive, 560-page work, Midnight in Chernobyl, British journalist and author Adam Higginbotham demonstrates that the world’s greatest-ever nuclear disaster was a direct result of endemic problems at almost every level of the Soviet economic system. This fact is clear from the moment the construction of the plant commenced. “Key mechanical parts and building materials often turned up late, or not at all, and those that did were often defective,” Higginbotham writes. “Steel and zirconium—essential for the miles of tubing and hundreds of fuel assemblies that would be plumbed through the heart of the giant reactors—were both in short supply; pipework and reinforced concrete intended for nuclear use often turned out to be so poorly made it had to be thrown away.”

The roof of the turbine hall of the power plant was covered with highly flammable bitumen, although this was contrary to the regulations. The reason: the more flame-retardant material that was supposed to be used was not even being manufactured in the USSR. The concrete was defective and the workers lacked power tools—a team of KGB agents and informants at the plant reported a continuous series of building faults. As the plant’s fourth reactor approached completion, a time-consuming safety test on the unit turbines had not been completed by Moscow’s deadline for completion on the last day of December 1983.

Investigations in the Soviet Union after the accident confirmed that the RBMK reactor type was not up to modern safety standards and even before the accident would never have been allowed to operate beyond the borders of the USSR. “The accident was inevitable. . . . If it hadn’t happened here and now, it would have happened somewhere else,” conceded Prime Minister of the USSR Nikolai Ryzhkov.

Soviet authorities initially tried to cover up the full scale of the accident, just as they had covered up a long chain of previous accidents at nuclear power plants. As one of the twelve founding members of the International Atomic Energy Agency (IAEA), since 1957 the Soviet Union had been obliged to report any nuclear accident that took place within its borders. Nevertheless, none of the dozens of dangerous accidents that occurred inside Soviet nuclear facilities over the decades that followed were ever mentioned to the IAEA. “For almost thirty years, both the Soviet public and the world at large were encouraged to believe that the USSR operated the safest nuclear industry in the world,” Higginbotham notes. In contrast, the comparatively harmless accident at the Three Mile Island nuclear power station near Harrisburg, Pennsylvania on March 28, 1979, was exploited by Soviet officials as an example of how unsafe nuclear power plants are under capitalism.

After the accident at the Vladimir Lenin Nuclear Plant in Chernobyl, Soviet officials stuck to the cover-up and claimed that the cause of the disaster was nothing more than human error. Some of the power plant’s employees were sentenced during a high-profile show trial. When one of the defendants, Anatoly Dyatlov, the nuclear power plant’s deputy chief engineer, submitted twenty-four written questions that he wanted to be put to the trial’s expert witnesses about the specifications of the reactor and whether it conformed to the regulations of the USSR’s State Committee for Nuclear Safety, the judge simply ruled the questions inadmissible without further explanation.

Valery Legasov, deputy director of the Soviet Institute of Atomic Energy, finally came to the conclusion that it was the “profound failure of the Soviet social experiment, and not merely a handful of reckless reactor operators, that Legasov believed was to blame for catastrophe.” In an interview with the literary journal Novy Mir, he warned that another Chernobyl catastrophe could occur at any of the USSR’s other RMBK nuclear power plants at any time.

The expert, wracked by illness and despair over what had happened, having studied the accident and its causes more intensively than probably anyone else, recorded a memoir on tape, which was published in Pravda soon after his death, This was possible at the time because it was the peak of the freedoms afforded to the editors of the party-controlled media by Mikhail Gorbachev’s glasnost in early 1986. “After I had visited Chernobyl NPP, I came to the conclusion that the accident was the inevitable apotheosis of the economic system which had been developed in the USSR over many decades,” Legasov states in the article, which was published in September 1988. “It’s My Duty To Say This.”

The causes were so deeply rooted in the structure of the planned economic system that efforts by Soviet politicians and scientists to change things after the disaster were unsuccessful. An internal report to the Central Committee of the CPSU, prepared a year after the accident at Chernobyl, noted that in the twelve months since the disaster, 320 equipment failures had occurred at Soviet nuclear power plants and that 160 of them led to emergency reactor shutdowns. All of these—like the numerous accidents before them—were concealed.