U.S. Ambiguity Is Pushing the Philippines Toward China 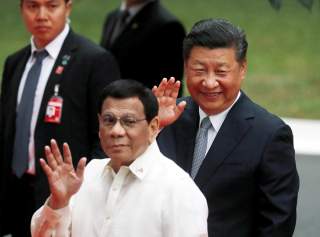 “Do we still have a Cold War today? Is [our alliance with the United States] still relevant to our security? Maybe not,” declared Philippine defense secretary Delfin Lorenzana in a press briefing at the Malacanang presidential palace, putting into question the fate of one of the oldest alliances in the world. The Philippine defense chief even went so far as confirming the possibility of abrogating the U.S.-Philippine 1951 Mutual Defense Treaty (MDT) if this were  “in the interest of the nation, [rather than] the interest of other nations.”

Under the MDT, each party has the prerogative to dispense with the treaty, which will take effect a year after the issuance of notice of abrogation. The review process could begin later this year under the supervision of a special commission, the Philippine defense chief told the author. On one hand, it seems like a sound, timely decision in light of evolving geopolitical dynamics in the region, most especially the rise of China as the most preeminent power in Asia.

On the other hand, it’s a double-edged sword, since it can serve both as a springboard to upgrade the bilateral alliance but also an opportunity for Beijing-friendly elements in Manila to lobby for strategic neutrality and downgrade of Philippine-U.S. relations. Thus, it’s of paramount importance for the “alliance managers,” namely those who advocated a stronger U.S.-Philippine partnership, to lobby for deeper and more comprehensive bilateral military cooperation.

In particular, it’s high time for Washington to stop equivocating on the precise coordinates of its alliance commitments to the Philippines, a phenomenon that has irked even the greatest friends of the bilateral alliance. What’s happening in the Philippines is a telltale of growing regional anxiety of American strategic reliability. After all, the Southeast Asian country is widely considered as the most pro-American nation on earth. What’s at stake is no less than American leadership in Asia, since any major downgrade in U.S.-Philippine alliance could send shockwaves across the region.

Bolt from the Blue

The announcement took almost everyone by surprise for at least three reasons. First of all it came from no less than Lorenzana himself, a fiercely independent-minded former general and long-time Washington-based defense attaché. Familiar with the inner workings of Capitol Hill, he played a central role in securing hundreds of millions of dollars in compensation for World War II Filipino veterans, who fought alongside Americans against Imperial Japan.

Widely seen as the “Mattis of the Philippines,” though he has been more secure in his position so far, Lorenzana has been the primary bedrock of reassurance and sobriety amidst Philippine president Rodrigo Duterte’s constant stream of anti-Western tirades, contradictory policy statements, and overtly China-friendly pronouncements.

Operationally, Lorenzana has made sure that Duterte’s apprehensions towards the West don’t significantly undermine long-standing defense cooperation between the Philippines and traditional allies, most especially the United States.

Under his conscientious watch, annual U.S.-Philippine joint military exercises have expanded in scope and frequency, counter-terror and counter-narcotics cooperation have been better than ever, while previously cancelled joint war games (during Duterte’s first year in office) in the South China Sea (with a view towards the Chinese threat) have also been restored.

Crucially, the Filipino defense chief, which was previously tapped as a prospective ambassador to Washington, also closely coordinated the much-celebrated repatriation of the famous Balagiga Bells to the Philippines with the Pentagon during former Defense Secretary James Mattis’ tenure.

And this brings us to the second reason, which is the seemingly odd timing of the announcement. The return of the bells, taken by occupying American forces during the colonial period from a Philippine church, was a major sticking point in Duterte’s relations with Washington.

In fact, the Filipino president warmly welcomed the move, setting the stage for a much-delayed visit to the White House likely by the second half of this year, according to senior advisors who spoke to the author on the condition of anonymity. And finally, the review is taking place just as China begins to consolidate the foundations of a fully-operational Air Defense Identification Zone (ADIZ) in the South China Sea, turning gigantic reclaimed islands into military fortresses with state-of-the-art weaponries, airstrips and facilities capable of hosting large numbers of personnel and engineers. Thus, one would expect the Philippines to double down rather than put into doubt its alliance with Washington.

It’s highly likely clear-eyed Filipino strategists hope to leverage the review process to upgrade, rather than abrogate, the alliance. For far too long, Washington has maintained so-called “strategic ambiguity” over the precise parameters of its commitments to the Philippines’ security. Over time, what we have seen is more ambiguity than strategy, since the Southeast Asian country has had to deal with the frightening prospect of Chinese domination of Philippine waters sans any significant assistance from Washington.

After all, there are two fundamental problems with the treaty, which has been a constant source of frustration among Filipino defense officials. The first one concerns lack of what I call “temporal automaticity,” namely absence of an assurance of expedient intervention in an event of a major contingency.

According to the Article VI of the MDT, each party “would act to meet the common dangers [in their area of jurisdiction] in accordance with its constitutional processes [author’s own emphasis].” This means that any American administration will likely have to rely on Congressional approval, which, in turn, may delay, derail and complicate the prospect of military intervention in behalf of the Philippines,’ especially if it involves a major adversary and amid the growing anti-war sentiments in America.

The second problem concerns the lack of clarity on the ‘spatial scope’ of the treaty. According to the Article V of the MDT, “an armed attack on the metropolitan territory of either of the Parties, or on the island territories under its jurisdiction in the Pacific or on its armed forces, public vessels or aircraft in the Pacific.”

Yet, neither the treaty nor policy pronouncements by Washington have clarified what precisely constitutes “metropolitan” territories of the Philippines as well as “island territories under its jurisdiction”. As Lorenzana lamented with forceful conviction, “The US is very ambivalent. They are saying the MDT covers only the metropolitan Philippines. I think their definition of metropolitan Philippine is just the whole country and [Spratlys] is not included.”

During the Nixon administration, then Secretary of State Henry Kissinger made it clear that the “MDT may apply in event of attack on [Philippine] forces deployed to third countries, which . . . is fundamentally different from case where deployment is for purpose of enlarging Philippine territory.”

Subsequent administrations, namely the Carter and Clinton presidencies, adopted a similar position though expanding the scope of the MDT by stating it covers Philippines troops and vessels operating in the area, while remaining officially ‘neutral’ on the status of sovereignty of disputed land features in the South China Sea.

There are, however, two problems with this operational interpretation. First, it still doesn’t make it clear which land features under Philippine administration are covered by the MDT, whether as part of “metropolitan” Philippines or “island territories under its jurisdiction in the Pacific.” The Southeast Asian country controls up to nine land features in the Spratlys, where it has placed military personnel and even civilian residents, particularly in the Thitu Island, the second largest naturally formed land feature in the area.

Moreover, as China moves towards establishing an exclusion zone in the South China Sea, the Filipinos are asking what exactly does an attack on Philippine troops and vessels operating in the Pacific constitute? Whether they can rely on American military assistance in an event that China begins to coercively drive out Filipino troops and personnel stationed in contested Spratly chain of islands? Can they rely on American military assistance if China were to reclaim the Scarborough Shoal, which lies just above one hundred nautical miles from mainland Philippines?

Of greatest frustration to the Philippines was former U.S. President Barack Obama decision to  repeatedly equivocate on the issue during his multiple visits to Manila as well as his insensitive portrayal of Philippine-claimed land features in the South China Sea as a “bunch of rocks.”

In stark contrast, he made it clear that the 1951 U.S.-Japan Security Treaty covers the disputed Senkaky/Diaoyu islands and that, in accordance to their bilateral treaty with Japan, American forces stationed in the northeast Asian country, “may be utilized to contribute to the maintenance of international peace and security in the Far East and to the security of Japan against armed attack from without.”

The fact that the United States remained largely on the sidelines during Chinese coercive occupation of the Philippine-claimed Mischief Reef  (21994) and Scarborough Shoal (2012) only reinforced the trauma of insecurity among the Filipino strategists. By initiating the review process, the Philippine defense establishment is making it clear that Washington has to go big or go home. The Trump administration can amend the mistakes of its predecessors by amending the terms of the treaty as well as its application. In exchange, the Philippines could provide expanded access to its prized military bases bordering the South China Sea. Otherwise, pro-Beijing elements in Manila will use this opportunity to downgrade the alliance, if not opt for outright strategic neutrality a la Finaland and Switzerland.