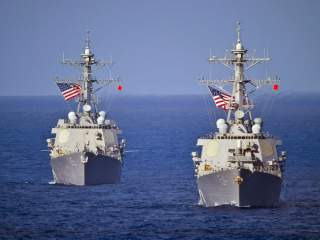 Are the United States and China collaborating to rewrite the international law of the sea? If so, it would be an odd but potent combination with ominous global implications.

China is a member of the United Nations Law of the Sea Convention, but regularly violates its provisions. The United States has not ratified UNCLOS, but has been its chief enforcer on behalf of freedom of navigation and world commerce. They would seem to be on opposite sides of the international legal regime.

In the face of Beijing’s constant overreaching, American officials have repeatedly put forth traditional arguments defending freedom of navigation and overflight under UNCLOS and customary international law. But rhetoric aside, for years Washington has been relatively passive as China builds facts on the ground and on the water.

In the face of mounting Congressional and expert pressure, the United States finally began taking steps to assert its navigational and overflight rights. Unfortunately, Washington’s ambiguous, confusing and contradictory response has raised new questions about U.S. seriousness and commitment.

Last fall, after months of verbal protestations without action, it finally sent the USS Lassen into the twelve-mile area claimed by China around one of its manmade islands. But U.S. officials then gave a series of conflicting accounts on whether it was a Freedom of Navigation Operation (FONOP) or innocent passage (IP).

The distinction matters because a FONOP is conducted in normal operating mode and concedes nothing on sovereignty to the unlawful claimant. The IP, by contrast, acknowledges that it is passing through the claimant’s territorial waters and does so in a non-challenging posture—e.g., with weapons and radar systems deactivated.

The confusion generated by that episode was compounded by Defense Secretary Ashton Carter’s evasive testimony before the Senate Armed Service Committee. As a result, Chairman John McCain demanded a fuller, written explanation of what exactly the Navy was doing.

Carter’s response offered a novel and startling resolution of the FONOP-IP dichotomy: the Lassen transit was doing both! “The FONOP involved a continuous and expeditious transit that is consistent with both the right of innocent passage, which only applies in a territorial sea, and with the high seas freedom of navigation that applies beyond any territorial sea.”

The statement is not consistent with UNCLOS or customary international law, and it is not grounded in logic—the ship was either transiting in normal operational mode or it was not. Yet, that is the Obama administration’s story and it is sticking to it; indeed, it is doubling down.

Just days ago, the Defense Department announced that the USS Curtis Wilbur, “conducted a freedom of navigation operation in the South China Sea” by passing within twelve nautical miles of Triton Island, administered by China (but also claimed by Taiwan and Vietnam).

DOD explained that the transit, like all FONOPS, was intended to challenge China’s claims that “are inconsistent with international law as reflected in the Law of the Sea Convention.”

Fine so far. But then the DOD statement says: “During the operation, the USS Curtis Wilbur transited in innocent passage.” So, once again, the U.S. Navy is describing a ship passage as simultaneously both a FONOP and an IP, an operational impossibility. (Again, a FONOP challenges a claim to territorial seas; an IP concedes and respects it.)

This can no longer be attributed to a communications glitch or an individual’s misstatement. There is clearly a concerted administration policy to create a hybrid maritime concept that it can use to satisfy critics of its earlier passivity without challenging China in the conventional manner. It appears that Washington and Beijing have reached some kind of modus vivendi, whereby both can claim to have achieved their essential goals.

On the surface, such an accommodation would seem conveniently consistent with the balanced approach espoused by Adm. Harry Harris, commander of U.S. Pacific Command in recent remarks in Beijing: “While we certainly disagree on some topics—the most public being China’s claims in the South China Sea and our activities there—there are many areas where we have common ground.”

If an arrangement is in place, Washington has conceded too much to Beijing. It would effectively legitimize China’s expanding claims and encourage more of the same, with far-reaching consequences for other adversaries in other parts of the world. This would be a perverse form of strategic partnership between the United States and China.

Even more disturbing is the possibility that this wink-and-nod precedent may already have been set, even if not publicly until now. Could it be that the Navy’s FONOPS in the Taiwan Strait, the Persian Gulf and elsewhere have actually been occurring as disguised IP operations?

The implications for the law of the sea, whether UNCLOS or customary international law, are so momentous that Congress needs to delve into the matter in a sustained and comprehensive manner, not with a few ad hoc questions at a hearing devoted to multiple issues. Freedom of navigation is a bedrock American principle that cannot be negotiated away to protect the sensibilities of China’s communist leaders who create the confrontations in the first place.

Any Congressional hearing on this subject will surely draw criticism of Washington’s failure to ratify UNCLOS, but that should not detract from the merits of the U.S. Navy’s vital and longstanding role in ensuring freedom of the seas. That national interest is too important to be eroded for the sake of transitory, calm relations between the United States and China, whose appetite for maritime and territorial aggrandizement will only be whetted.

Joseph A. Bosco was a China country desk officer in the office of the secretary of defense and served in the U.S. Navy as a communications officer aboard a Seventh Fleet flagship.