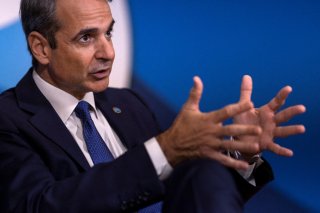 Underscoring this historic visit will be Mitsotakis’ address to a joint session of Congress at the invitation of Speaker Nancy Pelosi—a rare honor reserved for prominent international leaders—and the first ever to Congress by a Greek prime minister. The timing of Mitsotakis’ visit comes at a critical moment, as the largest conflict in Europe since World War II rages in Ukraine. Mitsotakis has burnished Greece’s Atlanticist credentials, voting to sanction Russia, sending weapons to Ukraine at considerable domestic political cost, and expelling Russian diplomats suspected of espionage.

Greece is a small country in terms of territory and population, yet its outsized impact on world history, culture, and civilization has shaped the values that define America’s constitutional republic. Thus, the joint session also celebrates the bicentennial of Greece’s 1821 declaration of independence from the Ottoman Empire, and the shared Western ideals of freedom, democracy, and respect for human rights.

Indeed, U.S.-Greece diplomatic relations have never been better. Last week, Athens ratified the U.S.-Greece Mutual Defense Cooperation Agreement, extending the current agreement by five years and solidifying and expanding the U.S. military presence in Greece under the Strategic Dialogue launched by President Donald Trump and continued by President Biden. Greece’s northern port of Alexandroupolis, near the Dardanelles Straits entry to the Black Sea, is taking on a significant role in America’s forward defense footprint. The port is now a U.S. and NATO defense hub, hosting the largest-ever U.S. military shipment in support of Operation Atlantic Resolve, to deter and defend against regional aggression and augment NATO’s air, ground, and naval presence in the eastern Mediterranean and Black Sea regions. Alexandroupolis is also becoming a key energy hub in Europe, with a new liquefied natural gas (LNG) facility set to expand the gas supply grid for Europe and reduce reliance on Russian energy.

Greece’s heightened defense and energy roles posture Athens to defend the Aegean and Eastern Mediterranean as well as to cooperate with NATO allies Turkey, Bulgaria, and Romania to constrain Russian naval and air forces in the Black Sea. Greece is a strong advocate of European Union accession for Western Balkan countries, to boost the regional economy, advance democratic reforms, and combat malign Russian influence, especially in Serbia, Bosnia-Herzegovina, Kosovo, and Montenegro.

The United States greatly benefits from Greece’s network of strategic alliances beyond Europe’s borders. Despite the lack of White House support for the EastMed natural gas pipeline project, the 3+1 mechanism of Cyprus, Greece, Israel—the three most democratic states in the Eastern Mediterranean—along with the United States, represents a key cooperation framework in trade, technology, energy security, counterterrorism, and interconnectivity in an extremely volatile region.

Greece is strengthening ties to the Persian Gulf as well, hosting a Saudi Air Force exercise on Crete and a diplomatic gathering called the “Philia Forum,” including Bahrain, Saudi Arabia, and the United Arab Emirates (UAE) as well as Egypt and Cyprus. In 2021, Greece deployed a Patriot battery along with 130 troops for operations in Saudi Arabia, and concluded a military cooperation agreement with the UAE.

Two major hurdles—the unresolved Cyprus problem and Turkey’s challenges of Greek sovereignty in the Aegean Sea—present perilous dilemmas for the region. While the war in Ukraine highlights U.S. and NATO efforts to keep Turkey in the Western camp, heightened Turkish-Greek tensions are counterproductive for the security alliance. Ankara is seeking to mend fences in its immediate periphery, with Egypt, UAE, and Israel, but has been escalating direct overflights of Greek islands in recent weeks. Greece and Turkey have a long and troubled history, and nearly came to blows over maritime disputes in the Aegean in 2020, as they nearly did in 1976, 1987, and 1996. These sovereignty disputes are not Washington’s alone to help resolve. Greece’s key NATO allies, such as France, Germany, and the United Kingdom, also have important roles in resolving conflicts in Southern Europe.

The Ukraine crisis clearly emphasizes the criticality of continued stability, security, and cooperation on NATO’s southern flank. Prime Minister Mitsotakis’ visit presents an opportunity to elevate these regional and functional issues to Biden, the U.S. Congress, and the American public. Washington can use its indispensable influence carefully to reinforce this key alliance and dial down regional tensions where solidarity within NATO is of the utmost importance, and where its seams are under greatest stress.

John Sitilides is a geopolitical strategist at Trilogy Advisors and diplomacy consultant to the State Department under a U.S. government contract.

The views expressed in this article are those of the authors and do not reflect official positions of the US government.