A U.S. Attack on Maduro's Venezuela Would Be a Mistake 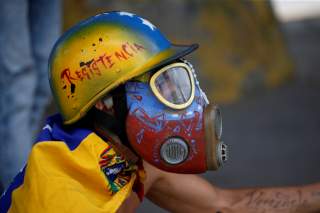 Extreme hawks in the United States apparently have not had their fill of wasting American lives and tax dollars in futile military adventures throughout the Middle East and Central Asia. Increasingly, they are making noises about launching a regime-change war much closer to home—in Venezuela. The latest proponent of that option is neoconservative Senator Marco Rubio (R-FL). Rubio appears poised to succeed the late Senator John McCain as South Carolina Senator Lindsey Graham’s partner in being the most prominent and visible GOP spokesmen for an ultra-hawkish foreign policy.

During an interview on Univision’s Miami affiliate in late August, Rubio stated that the security threat Venezuela’s leftist government now posed made it necessary to consider U.S. military action. “For months and years, I wanted the solution in Venezuela to be a non-military and peaceful solution, simply to restore democracy,” Rubio said. “I believe that the Armed Forces of the United States are only used in the event of a threat to national security. I believe that there is a very strong argument that can be made at this time that Venezuela and the Maduro regime has become a threat to the region and even to the United States.” He added: “Every day it gets worse and worse, right here in our own hemisphere.” Rubio accused the Venezuelan regime of “sponsoring and protecting narco-traffickers,” as well as flooding neighboring countries with “people seeking refuge from Venezuela.”

Unfortunately, Rubio is not alone in flirting with a military solution and arguing that Venezuela poses a security threat. President Trump seems inclined to embrace a similar view. Credible news reports that surfaced in July of this year that Trump told aides in August 2017 to prepare a contingency plan for U.S. military intervention in Venezuela. The president indicated considerable interest in that option. His security advisers reportedly pushed back, arguing that resorting to military force would have significant adverse repercussions throughout the hemisphere. Despite such resistance, it is highly probable that U.S. military leaders have such a contingency plan in place if the economic and political situation in Venezuela continues to deteriorate.

Washington’s growing annoyance with Venezuelan President Nicolas Maduro’s government is understandable. Maduro and his predecessor, Hugo Chavez, have created a nightmare for their unfortunate country. In the nearly two decades that the supposedly democratic socialist regime has held power, the economic situation has produced a humanitarian catastrophe. At the beginning of the twenty-first century, Venezuela had the highest per capita gross domestic product in South America. Today, it is becoming increasingly challenging to find even basic necessities on store shelves, and unemployment has soared well into the double digits. Last month, the annual inflation rate was tracking toward a mind-boggling 1 million percent. The Maduro government’s “solution” to its grotesque fiscal incompetence was to lop-off five zeros from the country's laughably debased currency. To the extent that Venezuela's economy functions at all, it is mostly through primitive bartering.

More than 1.5 million refugees have fled Venezuela, mostly to Colombia, Brazil, Peru, and other nearby countries. That flow has produced especially severe economic and social strains in Colombia, and relations between Bogota and Caracas have become increasingly tense and hostile. Not surprisingly the socialist regime’s economic mismanagement also has generated intense domestic opposition. The Maduro government’s response to growing internal opposition has been to enact ever more draconian measures to silence unfriendly media outlets and jail critics. With good reason, Washington charges that the regime is now little more than a thinly disguised dictatorship.

There is little doubt that Venezuela is a repulsive, left-wing, autocratic mess and a symbol of inherent socialist economic incompetence. One even can argue that it poses serious problems, perhaps even a “threat,” to neighboring countries. It is a major stretch, though, to argue that it poses a credible threat to the United States. Yet as early as March 2015, President Barack Obama declared that Venezuela was such a national security threat and used that designation to justify imposing economic sanctions on Caracas.

Launching a military intervention for forcible regime change in Venezuela would be a serious mistake. Granted, the country is a hemispheric neighbor, not some obscure nation on the other side of the planet. Americans should pay far more attention to adverse developments in their own geopolitical and strategic neighborhood than they do to problems in distant regions. A flight from Miami to Caracas takes barely 3.5 hours.

But Americans must be cognizant of the prospects for unpleasant blowback if the United States embarks on an armed intervention in Venezuela. The memories of U.S. “gunboat diplomacy,” CIA coups, and outright U.S. invasions of Latin American countries throughout much of the twentieth century have faded, but they have not disappeared among America’s neighbors. A U.S. attack on Venezuela would be deeply resented and poison hemispheric relations for years.

Moreover, Maduro still has a core of dedicated supporters despite his dreadful record of governance. Some of them likely would be willing to forcibly resist a Yankee invasion and occupation of their country. If that occurred, U.S. officials and neoconservative enthusiasts for war might discover that intervention in Venezuela was no more of a "cakewalk" than the conquest of Iraq proved to be. At best, considering a military option in Venezuela is greatly premature. At worst, it is utter folly that would lead to a new waste of American treasure and blood. Another quagmire is beckoning to U.S. leaders. They must reject the arguments of congenital hawks like Marco Rubio and firmly resist the temptation.