U.S.-China Tensions Are Unlikely to Lead to War 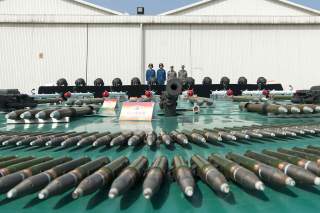 Graham Allison's April 12 article, “How America and China Could Stumble to War,” explores how misperceptions and bureaucratic dysfunction could accelerate a militarized crisis involving the United States and China into an unwanted war. However, the article fails to persuade because it neglects the key political and geostrategic conditions that make war plausible in the first place. Without those conditions in place, the risk that a crisis could accidentally escalate into war becomes far lower. The U.S.-China relationship today may be trending towards greater tension, but the relative stability and overall low level of hostility make the prospect of an accidental escalation to war extremely unlikely.

In a series of scenarios centered around the South China Sea, Taiwan and the East China Sea, Allison explored how well-established flashpoints involving China and the United States and its allies could spiral into unwanted war. Allison’s article argues that given the context of strategic rivalry between a rising power and a status-quo power, organizational and bureaucratic misjudgments increase the likelihood of unintended escalation. According to Allison, “the underlying stress created by China’s disruptive rise creates conditions in which accidental, otherwise inconsequential events could trigger a large-scale conflict.” This argument appears persuasive on its surface, in no small part because it evokes insights from some of Allison’s groundbreaking work on the organizational pathologies that made the Cuban Missile Crisis so dangerous.

However, Allison ultimately fails to persuade because he fails to specify the political and strategic conditions that make war plausible in the first place. Allison’s analysis implies that the United States and China are in a situation analogous to that of the Soviet Union and the United States in the early 1960s. In the Cold War example, the two countries faced each other on a near-war footing and engaged in a bitter geostrategic and ideological struggle for supremacy. The two countries experienced a series of militarized crises and fought each other repeatedly through proxy wars. It was this broader context that made issues of misjudgment so dangerous in a crisis.

By contrast, the U.S.-China relationship today operates at a much lower level of hostility and threat. China and the United States may be experiencing an increase in tensions, but the two countries remain far from the bitter, acrimonious rivalry that defined the U.S.-Soviet relationship in the early 1960s. Neither Washington nor Beijing regards the other as its principal enemy. Today’s rivals may view each other warily as competitors and threats on some issues, but they also view each other as important trade partners and partners on some shared concerns, such as North Korea, as the recent summit between President Donald Trump and Chinese president Xi Jinping illustrated. The behavior of their respective militaries underscores the relatively restrained rivalry. The military competition between China and the United States may be growing, but it operates at a far lower level of intensity than the relentless arms racing that typified the U.S.-Soviet standoff. And unlike their Cold War counterparts, U.S. and Chinese militaries are not postured to fight each other in major wars. Moreover, polls show that the people of the two countries regard each other with mixed views—a considerable contrast from the hostile sentiment expressed by the U.S. and Soviet publics for each other. Lacking both preparations for major war and a constituency for conflict, leaders and bureaucracies in both countries have less incentive to misjudge crisis situations in favor of unwarranted escalation.

To the contrary, political leaders and bureaucracies currently face a strong incentive to find ways of defusing crises in a manner that avoids unwanted escalation. This inclination manifested itself in the EP-3 airplane collision off Hainan Island in 2001, and in subsequent incidents involving U.S. and Chinese ships and aircraft, such as the harassment of the USNS Impeccable in 2009. This does not mean that there is no risk, however. Indeed, the potential for a dangerous militarized crisis may be growing. Moreover, key political and geostrategic developments could shift the incentives for leaders in favor of more escalatory options in a crisis and thereby make Allison’s scenarios more plausible. Past precedents offer some insight into the types of developments that would most likely propel the U.S.-China relationship into a hostile, competitive one featuring an elevated risk of conflict.

The most important driver, as Allison recognizes, would be a growing parity between China and the United States as economic, technological and geostrategic leaders of the international system. The United States and China feature an increasing parity in the size of their economies, but the United States retains a considerable lead in virtually every other dimension of national power. The current U.S.-China rivalry is a regional one centered on the Asia-Pacific region, but it retains the considerable potential of escalating into a global, systemic competition down the road. A second important driver would be the mobilization of public opinion behind the view that the other country is a primary source of threat, thereby providing a stronger constituency for escalatory policies. A related development would be the formal designation by leaders in both capitals of the other country as a primary hostile threat and likely foe. These developments would most likely be fueled by a growing array of intractable disputes, and further accelerated by a serious militarized crisis. The cumulative effect would be the exacerbation of an antagonistic competitive rivalry, repeated and volatile militarized crisis, and heightened risk that any flashpoint could escalate rapidly to war—a relationship that would resemble the U.S.-Soviet relationship in the early 1960s.

Yet even if the relationship evolved towards a more hostile form of rivalry, unique features of the contemporary world suggest lessons drawn from the past may have limited applicability. Economic interdependence in the twenty-first century is much different and far more complex than in it was in the past. So is the lethality of weaponry available to the major powers. In the sixteenth century, armies fought with pikes, swords and primitive guns. In the twenty-first century, it is possible to eliminate all life on the planet in a full-bore nuclear exchange. These features likely affect the willingness of leaders to escalate in a crisis in a manner far differently than in past rivalries.

More broadly, Allison’s analysis about the “Thucydides Trap” may be criticized for exaggerating the risks of war. In his claims to identify a high propensity for war between “rising” and “ruling” countries, he fails to clarify those terms, and does not distinguish the more dangerous from the less volatile types of rivalries. Contests for supremacy over land regions, for example, have historically proven the most conflict-prone, while competition for supremacy over maritime regions has, by contrast, tended to be less lethal. Rivalries also wax and wane over time, with varying levels of risks of war. A more careful review of rivalries and their variety, duration and patterns of interaction suggests that although most wars involve rivalries, many rivals avoid going to war.

Misperceptions and strategic accidents remain a persistent feature of international politics, and it may well be that that mistakes are more likely to be lethal in periods of adjustment in relative power configurations. Rising states do have problems negotiating status quo changes with states that have staked out their predominance earlier. Even so, the probability of war between China and the United States is almost certainly far less than the 75 percent predicted by Allison. If the leaders of both countries can continue to find ways to dampen the trends towards hostile rivalry and maintain sufficient cooperation to manage differences, then there is good reason to hope that the risk of war can be lowered further still.

Timothy Heath is a senior international defense research analyst at the nonprofit, nonpartisan RAND Corporation and member of the Pardee RAND Graduate School faculty. William R. Thompson is Distinguished and Rogers Professor at Indiana University and an adjunct researcher at RAND.

Image: Munitions are on display at a Chinese military post near Beijing. Wikimedia Commons/U.S. Department of Defense