U.S.-China Trade Is About to Change—And It Has Nothing To Do with Trump 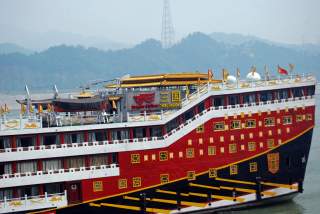 One way or another, there will be an adjustment in the trade relationship with China in the coming years. But the transition and its mechanisms have been poorly articulated. There is little question the trade relationship is lopsided between the United States and China, but this does not mean that harsh rhetoric and a trade war are necessarily in the cards.

The relationship is critical to global trade and growth. With more than $500 billion in two-way trade, much of the benefit (in terms of exports) accrues to the Chinese economy; however, this appears set to change. With the new Trump administration promising to alter the equation, bring manufacturing jobs back to the United States and generally make America great again, the proverbial tide appears to be turning towards domestic waters. The question facing the economist is how the adjustment will affect the global economy.

The current thinking around the China adjustment is a misnomer, because the adjustments are not as straightforward as widely implied. One the more common accusation is that China cheated the rules of international trade by managing its currency, the renminbi, to artificially low levels. This is both true and misleading. China was culpable of manipulating its currency lower during the early years of the twenty-first century, but has since moved towards propping it up. Though once true, it is now an irrelevant statement, and a deflection from the broader issues facing American workers.

The Trump administration has made clear its intent—whether through pre-election tweets or presidential appointees—to reverse the perceived tide of manufacturing fleeing to China. Calls for high tariffs and penalties for shifting domestic production offshore have been targeted directly at U.S. and foreign businesses—more than a step in the direction of protectionism.

In a recent Wall Street Journal opinion piece, Martin Feldstein defends the use of a border tax to increase revenues for the United States and create a more level playing field. The theory is relatively simple: the government should tax goods coming into the United States, and provide a tax credit for goods shipped abroad.

At first glance, according to Feldstein, it would make imports more expensive, driving up the cost and causing American consumers to pay more for foreign goods as well as causing American goods to be cheaper abroad. However, what Feldstein fails to note is that the ultimate regulator of global commerce, the dollar, would rise in value to offset the additional tax on imports. This would (theoretically) equalize the cost of both imported and exported goods to their original levels.

One downside to utilizing this taxation mechanism is that it does nothing to solve the trade differential issue—or rebalance the trade relationship with China. Another potentially ugly side of border adjustability is the reduction in global dollar purchasing power. The global economy is heavily dependent on the dollar and its value. After strengthening for the better part of three years, a further move upward would harm global growth. Regardless of whether it maintained an overall price level, it would hurt the rest of the world’s ability to afford U.S. goods.

A curse of maintaining the reserve currency is that any monetary policy movements have far more of a wide-ranging effect on the global economy than they would otherwise. A border tax resulting in a higher dollar would have catastrophic effects for countries who issued dollar-denominated debt or rely on commodities.

Presently, the United States is struggling to keep up with shifts in manufacturing. Technology is proving to be far more of a defining factor for the U.S. worker than politics and trade agreements. Author T. X. Hammes considered the possibility that technology, not politics, will more substantially alter the manufacturing and economic landscape. A government does not impose this “natural protectionism”; rather, it is an economic and financial necessity to compete. This implies the dynamic of shrinking globalization without necessarily dealing a significant blow to the U.S. economy.

If protectionism is happening on its own, why risk causing a trade war and an economic downturn to save jobs under threat from a more powerful and less tangible power? A side effect of the inevitability of natural protectionism is rendering moot much of the current tough talk on areas that depend on trade and manufacturing.

While the new, more protectionist global economy may encourage businesses to shorten their supply chains and automate production closer to consumers, it will not happen instantaneously. Manufacturers will invest and pivot over time. Years will pass.

Globalization and the expansion of trade were tremendous benefits, both to the United States and to the global economy. But this is waning. Trade is not the panacea for developing-world growth that it once was, and automated manufacturing is not a job boon for the developed world either. It is not obvious who wins in the new naturally protectionist world, but regardless, the environment may be inevitable.

In the end, there are few easy remedies to the China puzzle. The tools used to fight a trade war are blunt instruments, and the global economy would be caught in the crossfire between the United States and China. If thought through in their implementation, a border tax could raise U.S. federal tax revenue without too much spillover. But it will need to be done with care.

The problem facing the Trump administration has little to do with setting tariff rates, and more to do with speeding the rise of localization in manufacturing. Border adjustment may speed this return, but it is not the root cause. When the world is already looking inward (and China’s exports are stagnating), there is little reason to engage in hostility or retaliate with rhetoric. Embracing technology may, in fact, solve the problems. The China adjustment will happen whether or not the United States does anything provocative. The time for hostile trade policies has long passed.

Image: The Yangtze River and boats staging for entry into the locks at Three Gorges Dam. Flickr/Creative Commons/Harvey Barrison