The U.S. Congress Should Stop Passing Resolutions on Korea 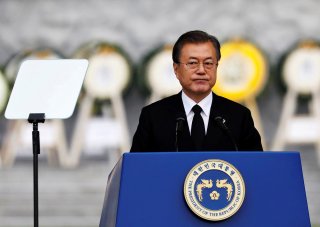 With the visit of South Korean president Moon Jae-in, Congress rushed to approve its standard hortatory resolution. The measure included the usual overstated boilerplate and offered a reminder that legislators would serve the American people better by focusing on the many serious issues facing the United States. A good starting point would be addressing what has become massive and endemic deficits, which will eventually crowd out Washington’s ability to do much beyond pay benefits to a rapidly aging population and interest on the equally rapidly rising national debt.

Thwarting this coming crisis would require serious effort and painful trade-offs, so Democrats and Republicans alike instead prefer to engage in meaningless puffery. Such was the latest resolution, written by leaders of the Senate Foreign Relations Committee and House Foreign Affairs Committee. The measure began with a series of self-congratulatory “whereas” declarations followed by a set of resolutions, setting forth a strategy that remains locked in a time warp, when the Republic of Korea (ROK) was a poor, desperate, and endangered nation and the United States provided what should have been a temporary defense shield behind which Seoul would take over responsibility for its own security.

America’s solons began by “recognizing the importance of the United States-Republic of Korea relationship to safeguarding peace, security, and prosperity on the Korean Peninsula, in the Indo-Pacific region, and beyond.” Self-congratulation is the norm on Capitol Hill, but it would be more accurate to say the alliance once was the linchpin for the peninsula’s defense, back when the Republic of Korea was a wreck of a country. Today, with more than fifty times the GDP, twice the population, a vast technological edge, and all sorts of other advantages over North Korea, the South is well able to defend itself.

As for securing the Indo-Pacific region, not so much. That region includes China, India, Russia, Vietnam, Japan, Australia, and more. Even if the Democratic People’s Republic of Korea managed to defeat its much larger, wealthier, and better-armed rival, the former would not be in a position to do much else. Pyongyang certainly would not be launching a blitzkrieg, whether via land or water, to conquer the rest of the region.

Congress also declared that: “the United States-Republic of Korea alliance is rooted in mutual trust, shared values, intertwined economic interests, and generations of people-to-people ties through friendship, family, and community that, taken together, provides a foundation for one of the strongest, most interoperable, and dynamic bilateral alliances in the world.” Actually, the current relationship is rooted in such values, not the alliance. In fact, the latter was founded in mistrust and fear: President Dwight Eisenhower offered the misnamed “mutual” defense treaty as a geopolitical bribe to convince South Korean President Syngman Rhee not to sabotage the armistice with North Korea and, most importantly, China. These other factors have developed as part of friendly, even intimate, ties that increased over time, but they don’t justify a military alliance.

The resolution stated that “the United States assures its ironclad security commitment to the Republic of Korea, including the United States extended deterrent underpinned by the full range of United States capabilities.” That surely is what Washington says today, but does it make any sense? The anodyne language underplays the meaning: America is willing to go to nuclear war over Korea, willing to sacrifice the U.S. homeland to defend South Korea. The latter is a very nice country but, frankly, it is not worth risking the incineration of millions of Americans.

Congress also observed that “the United States-Republic of Korea alliance was forged in blood, with 1,789,000 United States soldiers, sailors, airmen, and Marines serving in theater during the war, of whom 36,574 paid the ultimate sacrifice with their lives in defense of freedom in the Republic of Korea.” Talking about relationships “forged in blood” is common—the Chinese and North Koreans use similar rhetoric about ties which are fragile at best. It would make more sense to say that the U.S.-ROK alliance was forged in the Cold War. The reason the United States intervened militarily was that it was afraid that not acting would signal global weakness, leading the Soviet Union to threaten and perhaps assault Western Europe. America’s commitment and the deaths of Americans seven decades ago say nothing about the relevance of the alliance today.

There’s also talk of the “defense of freedom” in the ROK. The South was not free when the United States first intervened. Far from it. Syngman Rhee could not be mistaken for a political liberal. His government even slaughtered leftist political prisoners before retreating, presaging similar atrocities committed by the (short-lived) conquering North Korean authorities. American intervention did preserve ROK independence, which ultimately allowed the emergence of freedom after decades of military dictatorships. Seoul did not hold a genuinely free presidential election until 1987, four decades after the country’s creation.

Legislators jumped to the present when they stated that “the Republic of Korea, in an extraordinary gesture of lasting gratitude, has contributed to the construction of the Wall of Remembrance, which will serve as an eternal reminder for generations to come of the sacrifices made by the United States and Republic of Korea alliance in defense of freedom and regional security.” It’s nice that the Republic of Korea wrote a check. But that still doesn’t make the alliance a matter of mutual benefit. Consider the balance: the United States risks nuclear war to protect a country not vital to America’s security. That country helps pay for a monument to commemorate a shared conflict decades before. Unfortunately, this is neither a good nor a fair deal.

The members declared that the two governments “are committed to pursuing closely coordinated diplomatic efforts through a shared strategy to achieve the complete, verifiable, and irreversible denuclearization of North Korea and establishing peace on the Korean Peninsula.” That’s what Seoul and Washington say. Alas, the objective almost certainly is a fantasy. Absent military defeat or social collapse, Pyongyang is very unlikely to give up its nukes. Why would any rational regime on the outs with Washington do so? When U.S. officials say “trust us,” the North’s Kim Jong-un need only load up the YouTube video showing the death of Libya’s Muammar el-Qaddafi. How’d disarming in return for American promises work out for the latter? Not so well.

Congress couldn’t help itself but bring Tokyo into a resolution on South Korea, noting that there was “a robust and effective trilateral relationship between and among the United States, the ROK, and Japan is critical for joint security and interests in defending freedom and democracy, upholding human rights, promoting peace, security, and the rule of law in the Indo-Pacific and across the globe, championing women’s empowerment, and combating and adapting to complex environmental challenges.” Such a relationship certainly would be useful if it existed, but it doesn’t exist and never has. In case the members’ aides failed to mention it to their bosses, Tokyo and Seoul never have got on and these days are going through a particularly rough patch. Japan is far more concerned about “the rule of law” in the ROK than “in the Indo-Pacific and across the globe.”

In response to these and several other self-reverential claims, Congress made eleven resolutions. It welcomed Moon even though he was coming anyway. It reaffirmed the linchpin status of the alliance, which remains an ostentatiously outmoded way of thinking, and it reaffirmed the doctrine of extended deterrence, which is reckless and dangerous. Additionally, it supported “ongoing efforts to further strengthen, broaden, and deepen the ironclad” alliance. But if a relationship already is ironclad, then why must it be strengthened? Also, was there ever an alliance that the United States didn’t want to “further strengthen, broaden, and deepen”? The resolutions committed to all sorts of expanded cooperation, appreciated “President Moon’s commitment to diplomacy, and calls for close coordination” of policy toward the North—even as the United States blocks Seoul from taking the initiative in any meaningful way. It has encouraged a revived geopolitical love triangle involving the United States, ROK, and Japan “to address shared challenges” and appreciated the “extraordinary contribution to the Wall of Remembrances.” Thus, this has given it a bit of cash while Americans patrol the entire globe. But that does not count as “an extraordinary contribution.”

Often silly, wrong, or both, the resolution’s biggest problem might be lowering the bar for what lawmakers count as success. Worried about looking lazy? Pass a self-congratulatory message for a visiting dignitary and your work is done, at least for the day, and maybe longer.

Doug Bandow is a senior fellow at the Cato Institute. A former Special Assistant to President Ronald Reagan, he is author of Tripwire: Korea and U.S. Foreign Policy in a Changed World and co-author of The Korean Conundrum: America’s Troubled Relations with North and South Korea.