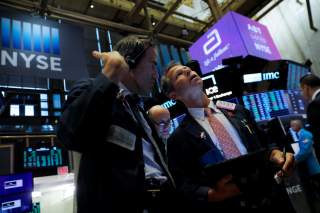 IN PART, Donald Trump’s election may well express public revulsion at this corporatist system. People may not know the intricacies of the system or its ugly origins, but they feel and voice disgust with the “rigged system,” complaining how the elite—those with influence within government, business, and finance—work together for themselves and their political agenda and not for the public weal. When people say these things, they are describing the fallout of the collusive system, even though the public hardly uses that terminology, much less the words corporatist or fascist. The leftward lurch of the Democratic Party no doubt has similar roots. Here, too, left-leaning supporters view any moderation that would support existing practice as hateful and unfair because it would continue to provide benefits to those who least need them, and at the expense of the working and middle classes. Both those trends, Trumpian rule on one side and the leftward shift on the other, offer reason for optimism—not because they offer solutions but because they reflect a reaction that might actually begin to unwind this country’s long-entrenched, fundamentally abusive economic system.

If the United States were to conduct such an unwinding, the place to start would be the regulatory system. Allowing regulatory exemptions for cooperation with Washington is a fundamental way agencies direct business toward the government’s agenda and frequently away from the market’s expression of the public’s wants and needs. If Congress, or an executive order from the White House, forbade such practices and insisted that the government set the rules and then stick to them in all cases, this primary lever of the country’s corporatist economic system would fail. Trump has moved marginally in this direction by dispensing with some regulations. By limiting the regulatory burdens placed on business, he has—no doubt inadvertently—reduced the value of the government-issued exemptions used to exact corporate cooperation. But because much regulation is also essential to protect the public welfare, Trump’s approach can only go so far. Ending this abusive system is less a matter of limiting the scope of regulations than stopping the discretion the administrative state has in applying them. For similar reasons, our country needs clear and consistent criteria, not bureaucratic discretion, in regulatory matters generally and especially in directing anti-trust measures.

Though such avenues of relief are clear enough, the prospect of meaningful progress remains remote. Powerful interests that are not subject to the ballot box have deep stakes in maintaining the existing arrangements. For industry and finance, the monopoly-like privileges offered by the long-established approach are simply too tempting. Indeed, one could argue that corporations have operated under this system for so long that they have lost the institutional ability to respond to anything other than government signals, and certainly not to those of the market. As for the government, those in power in the bureaucracy as well as those in elective office will want to maintain their ability to direct the still powerful American economy.

Trump, for all that he is a reflection of public discontent, shows only slight inclination to root out this corporatist, fascist-like system at the base of the “swamp” that he once promised to “drain.” He apparently does not even grasp the most fundamental conditions that underlie the discontent that helped bring him to office (talented as he is at playing to his “base”). Most of his behavior seems to indicate that he wants less to rid the country of the collusive system’s basic character than simply to redirect it toward a different agenda with different favorites. The tariff break offered to Apple might count in this regard, or the efforts to bend environmental regulations to enable more oil drilling on public lands.

The same can be said of Trump’s efforts to restructure the country’s trade deals—to make, in his words, a “better deal.” It has become increasingly evident that NAFTA, the Trans-Pacific Partnership, and other treaties benefited the established collusion between government, industry, and finance, and did so to the detriment of others who have operated outside the country’s cooperative-collusive system. As for Trump’s tariffs, whatever else he intends them to accomplish, they only bring different elements of the economy into the collusive system while excluding others. His volatile mix of rhetoric and behavior creates confusion about where the administration is going and makes it unclear whether it knows—at least when it comes to economics—with what and with whom it is dealing. It certainly provides little hope of remedying the present problems of America’s economics.

Nor would a rise to power by the Democratic Party’s left help in this matter, even though it, too, reflects an intense public discontent with present economic arrangements. Specifics, of course, depend on which candidate is speaking and to which audience, but the general theme is to replace fascist-style direction with something more socialist, in which the government would control industry and finance directly rather than through collusive deals. Admittedly, this approach has one appeal in that it presumably would withdraw the unfair privileges and protection long secured by some businesses. But if the history of socialism is any guide, the businesspeople and industrialists thrown out would be replaced by a different favored group chosen to direct the economy’s effort and the government’s agenda. A government-affiliated elite would continue, no doubt little changed, indeed maybe even including the same individuals.

Because there is little hope of a remedy from either the right or the left, it seems likely that the battle between a dissatisfied public and a collusive elite will continue. Future years may witness ebb and flow in the intensity of feeling against the fascist economy, but unless the public gives up its objections and accepts this abuse, the hostile politics of today will surely continue. The collusive elite will mount a formidable defense. After all, it controls the levers of power. It also has proved itself adept at finding allies on the left when the challenge from the right gains ground and allies on the right should the challenge from the left appear threatening. The elite has used Trump’s vulgarity and the unsavory attitudes among some of his followers to distract from the basic motivation of this opposition and to enlist allies on the left who otherwise would happily see this elite put out of power. Should the left gain power, the elite would no doubt do something similar to gain allies on the right who otherwise would happily see it out of power.

As for those who despair of seeing politics of good feeling anytime soon, there is compensation in an ongoing dispute. Turmoil should be preferable to supine acquiescence.

Milton Ezrati is a contributing editor at The National Interest, an affiliate of the Center for the Study of Human Capital at the University at Buffalo (SUNY), and chief economist for Vested, the New York based communications firm. His latest book is Thirty Tomorrows: The Next Three Decades of Globalization, Demographics, and How We Will Live.