The U.S. Election Might Determine the Future of Asia 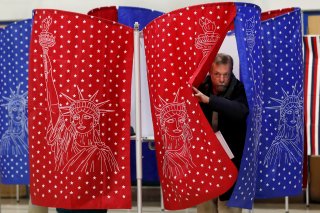 When you’ve got a house full of sick people you don’t usually go out looking for a fight but Xi Jinping isn’t most people. Like a high stakes gambler, he has rolled the dice—while the coronavirus epidemic rages—to see what China can win on the defense front.

The People’s Republic of China (PRC) muscle-flexing during the coronavirus is impressive: China continues sinking Vietnamese fishing boats; a People’s Liberation Army Navy (PLAN) ship locked its fire-control radar onto a Philippine Navy ship, and there are exercises to intimidate and develop specific skills needed to invade Taiwan (recently Chinese Premier Li Keqiang left out the usual word “peaceful” when talking about China’s goal of “reunification” with Taiwan). Farther afield, a PRC flotilla of maritime militia, Coast Guard, and PLAN harassed a Malaysian survey ship down at the far southern end of South China Sea, and Chinese fishing boats elbowed in on Indonesian fishing grounds near the Natuna Islands.

Farther west, the PLA is encroaching on three points on India’s land boundaries—digging in and going well beyond the usual jostling on the border.

And then there is Hong Kong. China is preparing to strangle it.

At the same time, despite the epidemic, China still churns out ships and aircraft and PLA training is going all-out. Military spending will increase by 6.6 percent this year—while the economy contracts. Considering China has no enemies, one fairly worries.

Beijing may not be keen to “shoot” just yet, but they have shifted the benchmark for Chinese behavior—and it never goes back to where it was. So expect to see more Chinese ships and aircraft (and even ground forces) doing more things in more places more often and with a chip on their shoulder.

Meanwhile, Chinese diplomatic muscle-flexing worldwide has become equal parts of insults and threats. This so-called “Wolf Warrior” diplomacy won’t make friends—and China knows it. But perhaps that’s the point. And anyway, it’s too late to say, “that was the Maotai (liquor) talking.”

The Chinese are playing rough, and practically daring anyone to do something about it. It’s easy to dismiss all this as acting out. But it might just work to the PRC’s advantage to be seen as the obnoxious, muscular, tattooed guy in the trailer park who nobody wants to take on. Beijing may indeed find itself in a stronger position, better able to intimidate its neighbors and control more territory. Or its sheer boorishness might finally coalesce serious opposition to Chinese efforts to dominate the Asia/Pacific region.

So how will Xi’s bet play out once the virus blows over?

Is there anyone in the Asia/Pacific that can or, more to the point, will take on the PRC?

Japan? There’s no sign it will do more than it is doing now. Increase defense spending?  Not really. Develop JSDF joint capability? Not really. A joint operational headquarters so U.S. and Japanese forces can operate together? Nope. Buying and talking about developing “shiny objects”—hypersonic weapons being the latest—without thought of a coherent defense scheme? Yes.

South Korea? President Moon Jae-in wouldn’t mind a closer tie-up with China if he thought he could get away with it. But he isn’t ready to jettison the Americans, not least since a large chunk of the South Korean population would protest. The U.S.-ROK relationship isn’t what it was.

ASEAN? Any evidence of a newfound will to resist China—either individually or as a loose “coalition” of several ASEAN states? Not really. Vietnam has always been willing to bite back—thus the word ‘newfound.’ Singapore hedges more all the time. Thailand has drifted toward the PRC (owing to Obama administration missteps). Malaysia wants its cake and to eat it too. Indonesia is potentially a bright spot. It will take Chinese money but never has any great love for the Chinese state, and sometimes Chinese people. Cambodia and Laos? In China’s pocket.

Philippines? President Duterte leans towards the PRC but not all Filipinos agree. Regardless, the Philippines also isn’t the solid U.S. ally it was a few years back.

Taiwan? Its existence is an affront to the Chinese Communist Party—as evidence consensual government not only suits Chinese people but enables them to thrive and, in a time of the coronavirus, survive. But the most Taiwan can do is defend itself.

Australia? Canberra is now facing a stark choice since the PRC has thrown down the gauntlet. The Chinese ambassador is threatening economic pain, and the editor of state-owned Global Times described Australia as gum stuck to China’s shoe. Once upon a time such language would have meant a fist on the snout.  And plenty of Australians (and Australians of the political class too) would like to oblige. But there are also plenty of Australian businessmen, as well as current and former senior government officials, who will grovel if there’s money involved.

One suspects the Australians will stay firm on security and sovereignty. But alone, Australia isn’t enough to forestall PRC domination of the region.

New Zealand? It faces the same pressure as Australia, but is more likely to “fold”—and it is pretty small anyway.

South Pacific nations: PRC encroachment and political subversion continues despite the coronavirus. The same thing is happening in the Western and Central Pacific too.

India? Some grounds for optimism as India writ large has had a clearer sense of the Chinese threat for decades. But Indian influence is largely confined to the Indian Ocean area.

So while the PRC is pushing and bullying across the region, resistance is haphazard and no Asian country is a match for China one-on-one.

And what about the United States? The Americans are trying to hold the line in the Indo-Pacific region and are key—independently and as a rallying point for alliances. America still has considerable force in Asia-Pacific region—though there’s a perception it’s not keeping up with China. It didn’t help that while the aircraft carrier, USS Theodore Roosevelt was a coronavirus casualty in Guam, the PLA Navy’s carrier, Liaoning, was sailing where the Japanese and Taiwanese would notice.

America has also taken a financial hit and it is doubtful there will be any more money for defense.  And an administration dealing with the coronavirus induced domestic chaos can’t pay as much attention to foreign affairs—even if it wants to.

Making things dicier is the upcoming presidential election. If Donald Trump loses the election, then expect the new Biden administration to relax pressure on the PRC—even if some Biden advisors do understand the Chinese threat. Name the excuse:  “nuanced realism,” “statesmanship,” “domestic priorities,” “don’t provoke,” maybe even a “reset” button.

Many Democrats even now claim Trump is hyping the PRC threat as a distraction. Max Baucus, Obama’s former ambassador to China savages the Trump administration and it’s China policy in Chinese propaganda outlets.

And the Democratic Party’s far-left want to cut defense spending and the nation’s nuclear arsenal as well.

Without serious U.S. pressure on the PRC don’t expect other Asian nations to stick their necks out, except maybe on narrow issues of core domestic security interest. And even then they are unlikely to win against China.

The U.S. election just might determine the future of Asia in terms of continued U.S. presence and influence and all that entails—including support for consensual government, rule of law, and human freedoms—or a new PRC dominated region.

Is there a bright side?  Kind of.  First, the game isn’t over. The luster is off China in more places than ever. Before, it was possible with some sophistry to declare the PRC unthreatening and only looking to rise peacefully. That’s not so easy now, China is irritating and scaring the hell out of people. Many are looking around to see if another way is possible.

That creates an opportunity if the United States makes the effort to bind together regional nations . . . not just security-wise but economically. Treat friends like friends, don’t squeeze them for cash—and offer a clear, well-articulated alternative. The timing has never been better.

But which outcome is more likely? Xi’s bet that the time is right for a PRC that intimidates Asia into acquiescence and gradually over-matches the United States in the region? Or actions by a U.S.-backed partnership to change the odds and fight back against Chinese efforts to dominate?

That question is better answered after November 3.

Grant Newsham is a retired U.S. Marine Officer and is a senior research fellow at the Japan Forum for Strategic Studies.