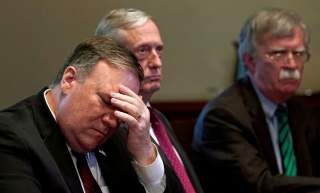 <p>The U.S. Defense Department has officially confirmed that the U.S. military withdrawal from Syria is under way. However, in actuality only an extremely limited form of withdrawal is occurring, and one that is hardly consequential—as indicated by the tragic loss of four Americans there this week. Rather, it comprises merely a cosmetic withdrawal, so meager in size as to amount to just enough to offer President Donald Trump a fig leaf for covering up the most significant foreign policy mistake of his young presidency in a long string of them.</p>

<p>The direct damage to the reputation of the United States, however, has been substantial, and is likely to get still worse. In fact, it is no exaggeration to describe America’s global reputation—as well as its foreign-policy efficacy—as being in free fall. Other Trump administration factors have contributed to this, particularly the mistakes made by the president, his national security adviser, and the secretary of state. If the Syrian theater is Exhibit A, then last week’s failed Arab League Summit is Exhibit B for demonstrating the divisiveness that results from the absence of American leadership.</p>

<p>NATO also features prominently in America’s diminution. Were the United States to withdraw from NATO as Trump has openly mused about, then its collapse would follow rapidly thereafter. Mueller probe revelations in Washington are now dovetailing with the degradation of American leadership, as Trump is now being seriously accused of being a Russia agent. As it happens, NATO’s disappearance is the top-ranking item on Vladimir Putin’s geopolitical wish list. Lost on Trump is what is glaringly obvious to everyone else, including Russia—NATO is the very alliance that won the Cold War.</p>

<p>Then there is this administration’s clumsy pursuit of a so-called Arab NATO. Right up there with the new U.S. Space Force, the Trump administration is actively failing at healing the rift in the Gulf Cooperation Council (GCC), and quixotically pursuing an Arab NATO to replace it, which would serve as some sort of Sunni state military alliance intent on confronting and containing Iran. Several countries in the Mideast have rebuffed the administration about an Arab NATO just this week. But when historians eventually write about this period of world history, the inept Syria withdrawal decision will stand out as the most destabilizing.</p>

<p>Trump made his egregious Syria decision with zero input from U.S. diplomats or military leaders, based on nothing other than an initial conversation with Turkish president Recep Erdogan on the sidelines of the G20. Another conversation took place between the two leaders the day that Trump tweeted about his decision to withdraw troops from Syria. That plan has already been walked almost all the way back, not merely by senior U.S. officials but in particular by the Israeli prime minister, defense chief, and intel chief who emphasized to the president that his nemesis Iran along with Russia was going to be the chief beneficiary of this inane decision.</p>

<p>Directly thereafter, Mike Pompeo and John Bolton have added to the disarray and confusion, by insisting on the one hand that the United States is in the process of withdrawing from Syria, but not until all of ISIS is eradicated (in Bolton’s case) and Iran is fully driven out of Syria (in Pompeo’s case) and the Kurds are protected (in both their cases). They and U.S. Syria envoy Jeffries were forced to fan out across the region to try to contain the fallout from Trump’s precipitous decision, as well as their own blatant contradictions. As a consequence, not only is there confusion among U.S. military ranks and the Pentagon, but in particular among America’s allies and foes across the Mideast.</p>

<p>Remarkably, Turkey—so enraged by Bolton’s comments about protecting the Kurds that Erdogan refused to meet with him in Istanbul—is also opposed to a complete U.S. withdrawal, as it merely wants the United States to stop assisting the Kurdish YPG and SDF forces.&nbsp;But the Kurds have little faith in the United&nbsp;States&nbsp;either, as they are already busy seeking deals with Russia, and with great regret the Assad regime (which has massacred them in the past). This was the position for the Kurds to be put in that the former Secretary of Defense Mattis appropriately could not countenance. Effectively, the Kurds fear they are being betrayed by the United States&nbsp;again, with memories of the Iraq War American abandonment extant.</p>

<p>In a move that fanned fears of foreign-policy collusion with Russia, Trump’s alleged Syrian pullout was applauded the very next day in a spontaneous speech in Moscow by Vladimir Putin as “the correct decision.” But while Russia is delighted by this gift from Trump, even its military brass are concerned about the loss of Mattis and the ongoing need for coordination among Russian and American forces in the Syrian theater.</p>

<p>Iran, equally elated, castigated the United States and Trump when it claimed that the United States was retreating from a region where it did not belong. Iran was so buoyed by the pullout “decision” that it began setting up additional forward bases closer to the Golan Heights, which Israel promptly destroyed. Since then Israel has more openly attacked Iranian, Syrian, and Hezbollah capabilities, prompting legitimate concerns about a new escalation in violence in the Syrian War that could further spiral and draw in additional external powers.</p>

<p>ISIS is also likely to benefit from the non-withdrawal. At present there are only a couple thousand fighters under major military pressure from Kurdish, American, and French forces (and the air power of the British and others), but there are up to “five figures” of fighters spread throughout the region in remote areas of multiple countries, including a large swath of southern Syria.</p>

<p>Just as regrettable and harmful as Trump’s nondecision decision was Pompeo’s cringe-worthy speech in Cairo. Some people have described the speech as being—e.g. in the words of Tom Friedman—worse than those given by former Secretary of State Rex Tillerson, which were pretty bad. Pompeo is highly overrated. The man was a Benghazi gadfly in Congress and then somehow became a pillar of probity and skill by way of his “legitimacy cloaked” stint as CIA director. Pompeo has also made a series of mistakes in his North Korea diplomacy, such as tying Trump’s potential re-election date to a request for the North’s compliance with U.S. denuclearization demands.</p>

<p>But Pompeo’s Cairo speech marked a new low for this plodding underachieving secretary of state. Rather than crafting a sound speech with messaging in mind for allies/foes in the region, all based upon a well-formulated strategy for achieving U.S. goals in Syria and the wider Mideast region, Pompeo spent most of the speech inappropriately and inaccurately bloviating about former President Barack Obama. Worse, there was almost a complete dearth of an articulation of a geostrategically sound U.S. strategy for the region, one matching excessive aims—such as defeating ISIS, protecting the Kurds, and removing Iran from the area—with meager means, a confusingly protracted non-withdrawal.</p>

<p>Pompeo could not even get the basic distinction between Sunni and Shia right. He seemed oblivious to the contradiction between laying all the blame for terrorism in the region at the doorstep of Iran, and then in another breath slamming Obama for retreating and creating ISIS.</p>

<p>Moreover, Pompeo once more contradicted himself on Syria by stating that the United States was pulling out but would remain deployed in theater until Iran left the country.</p>

<p>Pompeo’s speech was rapidly and roundly dismissed, and overnight it was largely forgotten. In effect, it represents America at its worst, unclear about its aims, incoherently projecting the means to meet them, shallow in its strategic thinking, and mealy mouthed in the articulation of all of it. The speech also somehow managed to feebly grasp onto the old flawed Kirkpatrick Doctrine by effusively praising el-Sisi the dictatorial leader of Egypt and soon afterward the similarly inclined Crown Prince of Saudi Arabia. Pompeo should never have given or been allowed to give such a callow speech from the very region it is confusingly and simultaneously engaging and disengaging from.</p>

<p>Trump is no sage foreign-policy dealmaker, not remotely close to the talented broker this moniker implies. Instead, even more in the foreign-policy sphere than in the domestic one, his decisions amount to a series of giveaways, and largely to U.S. adversaries. First, the supposed Syria withdrawal with no concessions from Russia, Iran, or the Assad regime. Second, the large drawdown supposedly coming in Afghanistan, with no concessions from the Taliban or ISIS. Third, relocating the U.S. embassy to Jerusalem without extracting concessions from the Israelis (or even the Palestinians) in the peace process. Additionally, his decided to approve a massive U.S. defense budget increase without winning commitments from U.S. allies to substantially increase their own defense budgets.</p>

<p>Between Trump’s desire to withdraw from NATO to his administration’s flawed pursuit of an Arab NATO, but in particular his woefully flawed decision to withdraw troops from Syria (and confusing de facto non-withdrawal), more than any other Trump move to date has shattered U.S. credibility in the region (not to mention the wider world). As a result, America’s reputation in the world is now worse even than the last nadir—the axis of evil “warning” by George W. Bush—&nbsp;in fact, worse than in any era since the first time the U.S. strode more confidently on the world stage when Theodore Roosevelt was in the White House.</p>

<p><em>Dr. Jeffrey A. Stacey is a former State Department official in the Obama administration, and author of the forthcoming book </em>Rise of the East, End of the West?</p>