Is U.S. Grand Strategy Dead Thanks to Donald Trump? 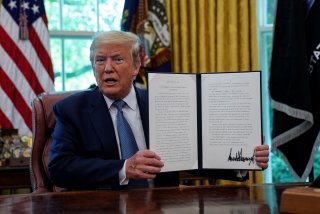 Nor has the Trump administration rebuked any of these statements about purpose and power. While it has not issued a Maritime Strategy of its own, the administration’s National Security Strategy and National Defense Strategy conform in the main to past grand strategy, updated to keep pace with changing times in Eurasia. For instance, the Indo-Pacific Strategy Report issued by the Pentagon last year proclaims at its outset that “the Indo-Pacific is the Department of Defense’s priority theater.” Designating the region as the administration’s top priority represents a logical extension of the Obama administration’s “pivot,” or “rebalance,” to Asia—a strategic shift unveiled by Secretary State Hillary Clinton in 2011 and reaffirmed by Pentagon magnates soon after.

Now, let’s not overdo this. The Trump administration has clearly prosecuted grand strategy somewhat differently than its predecessors, not always in salutary ways. For instance, the president famously torpedoed the Obama-era Trans-Pacific Partnership, a multinational pact designed to lower trade barriers among Pacific nations. Renouncing the economic core strikes at the fundaments of any Mahanian strategy of commercial access. This could prove troublesome. More recently Trump has pledged to “decouple” the U.S. economy from China’s in the wake of the pandemic, bringing businesses home or diversifying the supply chain to countries less likely to withhold vital goods in America’s time of need. For instance, Apple evidently intends to relocate sizable elements of iPhone production to India. If other firms elect to manufacture goods on the subcontinent, they will tug U.S. maritime strategy toward the Indian Ocean.

Economic geography, in other words, promises to rearrange how Washington prosecutes its nautical grand strategy, in other words. But the administration appears steadfast about the purposes impelling that strategy.

It’s also worth noting that if Washington remains intent on a grand strategy of access, it confronts a Communist China intent on a grand strategy of regulating or perhaps barring U.S. access to the Western Pacific. This harks back to my opening point about competitors shifting the terrain under U.S. grand strategy. “Anti-access” and “area denial,” which Drezner, Krebs, and Schweller dismiss as “mainly cyberwarfare techniques and antisatellite weapons,” is far, far more than the coauthors let on. Anti-access, a Pentagon term to describe Chinese strategy, operations, and forces, refers to the armory of shore-based and sea-based armaments the People’s Liberation Army (PLA) has fielded to menace U.S. forces already in the region, as well as those that would reinforce them from U.S. seaports in times of war. Anti-ship and anti-air missiles of all kinds are the chief weapons. Cyber and anti-satellite capabilities are important but ancillary parts of the PLA’s defensive thicket.

This is imposing enough, but anti-access strategy goes beyond weaponeering. Beijing’s strategy is a counter-Mahanian grand strategy that harnesses an array of implements of power, non-military as well as military. If Mahan wanted the U.S. Navy to promote commercial and political access, Beijing uses economics as a lever along with diplomacy and military might to restrict and degrade U.S. access to the Western Pacific. It is a determined alliance-breaker, for example. Xi Jinping has courted Philippine President Rodrigo Duterte, hoping to woo him away from the U.S.-Philippine alliance and dislodge U.S. forces from a segment of the first island chain. Beijing deploys economic inducements and coercion in an effort to draw Eurasian countries into its orbit at America’s expense. And of course, it has staged an impressive military buildup over the past quarter-century.

Far from shaping up as an age that has left grand strategy behind, the age of Trump represents the arena where a contest between a U.S. grand strategy of long-standing and emerging grand strategies pursued by China, Russia, and other contenders will unfold.

But three, Drezner, Krebs, and Schweller are right to exhort senior leadership to devolve strategic decisionmaking to many actors, setting in motion a competition of ideas and applying a catalyst for innovation. This finding is sound whether the United States has transcended grand strategy or not. They intimate that grand strategy vests authority in a few powerful people, the would-be George F. Kennans of the world. If so, that leaves foreign policy dependent on the prescience and strategic dexterity of the few. Betting on lone geniuses is a bad bet. As Florentine philosopher-statesman Niccolò Machiavelli teaches, individuals are set in their ways. Strategic leaders tend to succeed only so long as the times and setting happen to remain congenial to their methods. When the times change they keep doing what worked in the past—only to find it no longer works.

At that stage they and their government court ruin.

Machiavelli points to Fabius Maximus, the savior of Rome during the Second Punic War. Nicknamed “the Delayer,” Fabius deliberately protracted the war against Hannibal for years, waging a plodding defensive war to gain time for the republic to get its act together. Hence the laurels heaped on him. But he was unable to make the transition to offensive battlefield strategy when the time came. He spoke out against a counteroffensive and, maintains Machiavelli, might have lost the war had he remained in command. The senate replaced the Delayer with the brash Scipio Africanus, who carried the war across the Mediterranean Sea and smashed Carthage on Carthaginian ground. Scipio was the right general for new times.

Rome could change leadership in midcourse, and so can America. That’s the advantage of being a republic. Still, it’s better to get things right upfront rather than risk losing everything. Drezner, Krebs, and Schweller are wrong; grand strategy is alive. But they are correct about how to bolster U.S. strategic performance. Let’s encourage freewheeling debate among a multitude of voices, furnishing political leaders with options to choose from, rather than concentrate authority in a few fallible hands. Let heterodoxy prevail. Sam Spade would approve.