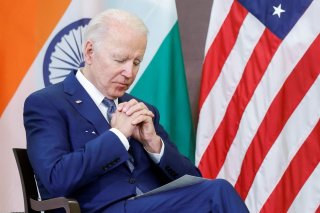 Officially, China thinks the United States is a paper tiger. Some Americans agree. Michael Lind, professor at the University of Texas at Austin, argues in a July 2 article in The National Interest that “American Triumphalism is back,” revived by the failure of Russia to quickly achieve the apparently original objectives of its invasion of Ukraine. As a corrective, Lind makes a case for American declinism. Worldwide, he says, the United States is “in retreat or in defeat or in stalemate.” China, on the other hand, is winning. Thus, Washington’s grand strategy should settle for America being influential only in Western Europe and North America, Lind writes. The case Lind makes is deeply flawed, and if operationalized would serve U.S. and allied interests badly.

Whether the Russo-Ukrainian War has pushed the Biden administration into “triumphalism” is questionable. Washington has been cautious and worried about provoking Russian escalation. Biden and his senior officials have expressed what could be better described as a grim determination to rally and maintain support from the other NATO members to prevent an outright defeat of Ukraine.

Lind argues that “the United States is staggering from a series of humiliating strategic defeats” around the world. Naturally, this list of disasters relies heavily on the Middle East: the withdrawal from Afghanistan was “embarrassing,” the continued U.S. presence is unpopular in Iraq, Bashar al-Assad remains in power in Syria despite U.S. opposition, and U.S.-backed Arab Springs in Libya and Egypt failed.

These were the “defeats,” however, of a superpower driven by hubris to overstretches that few if any other countries would attempt. In Afghanistan, for example, the U.S. government spent twenty years and $2 trillion, and this without seriously disrupting life for most Americans back home. None of this suggests weakness. These were failures of judgment rather than of military or economic strength. The lesson is not that America is in decline, but rather that Washington should avoid nation-building in the Third World.

The other U.S. “defeats” Lind mentions are failure to dissuade China from pressing its claim to ownership of most of the South China Sea or to stop its persecution of Uyghurs in China. The People’s Republic of China’s (PRC) construction of military bases on disputed reefs was a successful gray-zone tactic that the United States declined to go to war to stop. Instead, Washington has relied on military signaling and diplomacy to counter China’s claims. Consistent with the U.S. agenda, Beijing has not gained the assent of rival claimants or the international community to its claims. In another arena of PRC irredentism, the United States has up to now successfully deterred China from a military attack against Taiwan.

Regarding abusive practices by the Chinese government against its own citizens, no foreign country is able to compel Beijing to reverse a policy if this would threaten or shame the ruling Party. The persecution of Uyghurs is such a case; Beijing has committed itself to denying all accusations and doubling down on the policy.

Lind is unimpressed by the Quad, an informal counter-China coordination framework with core members Japan, India, Australia, and the United States. He gives two reasons. First, he says, the Quad failed to inflict “serious consequences” on China for the June 2020 Sino-Indian border skirmish in the Galwan Valley. In fact, India itself has duly retaliated against China. While India reported that twenty of its military personnel died in the clash, the Chinese side may have suffered as many as forty-five fatalities. Furthermore, India subsequently imposed economic punishments on China. In any case, it is unclear how the Galwan Valley incident and its aftermath provides evidence of U.S. decline.

Secondly, Lind says Quad cooperation to oppose China will be impossible given that Japan, Australia, and other U.S. allies are heavily economically dependent on China, and “At some point, China will jerk the leash.” China, however, has already jerked the economic leash, with only limited effect.

Starting in 2020, Australia suffered Chinese bans against several important Australian exports for calling upon the World Health Organization to investigate the origin of the coronavirus. Later that year, Chinese officials demanded that Australia act on fourteen PRC grievances. To date, however, Australia has not met China’s demands.

The Japanese business community sees a close economic relationship with China as crucial to Japan’s continued prosperity. Nevertheless, Japan has steadily moved in recent years toward increasing national defense spending, cooperating more closely with the United States on security issues, and committing to help defend Taiwan in the event of a cross-Strait war, despite repeated warnings from the Chinese government.

Unlike Lind, the Chinese government finds the Quad deeply worrisome.

In addition to “defeats,” Lind sees a lack of U.S. successes as evidence of decline. “Since the fall of Saigon,” he writes, “the only lasting military and geopolitical victories of America and its allies have been in Europe.” The change of government in South Vietnam, which moved the country out of the U.S. bloc, still left the United States as the strategically most influential country in Asia. When you’re already the hegemon, maintaining the status quo is not too bad.

Even so, Lind’s assertion is inaccurate. There have occurred lasting U.S. and allied victories since 1975. South Korea and Taiwan became liberal democracies and more robust supporters of the U.S.-led regional order. Furthermore, with U.S. assistance, South Korea made itself far less vulnerable to a forcible takeover by the North Korean government. Mongolia implemented a democratic system of government in 1990 and moved to permanently closer relations with the United States. Washington has stronger security cooperation with several Southeast Asian countries now than during the 1970s.

China will maintain leverage over the United States, Lind says, because “America’s business and banking elites” will prevent economic de-coupling from China. Total de-coupling is a straw man; both governments are moving toward targeted de-coupling in certain vital sectors, which will make it harder for either to use the economic relationship to effectively coerce the other. In the meantime, however, note that economic interdependence has not resulted in consistent U.S. kowtowing to Beijing. This year, for example, Washington diplomatically boycotted the 2022 Winter Olympics in Beijing, banned the importation of cotton from Xinjiang, and sent a delegation of six senior members of Congress to visit Taiwan.

Lind’s argument that China’s economic supremacy will make American strategic pre-eminence untenable is based on a projection of recent trends. But this may be the end of an era rather than the beginning. China’s economy is slowing toward a long-term annual growth rate similar to that of the United States, and China’s people will likely never reach the per capita wealth and productivity of Americans. Xi Jinping’s drives to shrink civil society, make the Chinese Communist Party a stronger presence in Chinese life, and promote state-owned industries at the expense of the private sector undermine China’s ability to compete with the United States in creativity and innovation. An increasingly concerted U.S. effort to avoid helping China take the lead in crucial future technologies will handicap China further.

Ideally, Washington and Beijing can reach an understanding on peaceful coexistence that allows each side to preserve what it considers vital interests. But even if not, there is at present no compelling reason for the United States to voluntarily abandon a strategic shaping role in Asia and retrench to Europe and North America. U.S. friends and allies in the Asia-Pacific still value U.S. engagement, and these partnerships make the United States more secure and prosperous. The rise of a China that is both strong and revisionist raises the costs and risks of America playing this role. But just as the competition gets more intense, China’s ability to compete may be plateauing.

Denny Roy is a Senior Fellow at the East-West Center in Honolulu.