U.S. Inaction in Cameroon Is No Longer an Option 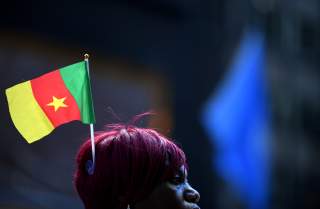 The central African nation of Cameroon does not often make international headlines. Governments within Africa and beyond have recognized Cameroon’s military efforts against Boko Haram, and the country has also been known for welcoming refugees from neighboring countries and for the peaceful coexistence among its hundreds of linguistic groups. But over the last few years, violence has engulfed the country’s Anglophone regions.

The United States has particularly important stakes in Cameroon. Following a decade of military cooperation with Cameroonian forces, Washington is obligated to ensure that assistance is not tantamount to complicity. With investment comes the responsibility and leverage to ease the extent of human suffering.

Tensions between Anglophone and Francophone populations in the Cameroon’s northwest and southwest regions (NWSW) have been simmering since the 1970s. In late 2016, however, the government imposed Francophone teachers and lawyers in Anglophone schools and courts, prompting peaceful protests that were met with military action. This fueled existing separatist sentiment among the Anglophone population and led to the formation of several non-state armed groups.

Clashes between these armed groups and Cameroonian forces, as well as attacks on civilians, have forced more than half a million people into the NWSW’s dense forests, without proper shelter and little access to food and basic services. Separatist groups have enforced school boycotts since 2017, leaving a generation of children without education for three years.

Warring parties have tortured and killed civilians and burnt down hundreds of villages. Basic services have almost completely collapsed, and, coupled with insecurity, left 1.3 million people in need of humanitarian assistance in the NWSW alone—numbers the government of Cameroon staunchly denies.

Despite the dire need, the governments of the world have been practically silent on the humanitarian situation, leading the Norwegian Refugee Council to dub the conflict in the NWSW the world’s most neglected displacement crisis.

Most efforts by interested political powers and typical humanitarian donors, such as Canada, Switzerland and the United States, are focused on finding a political solution to the conflict. But amidst these efforts, the humanitarian situation continues to deteriorate and remains largely ignored.

The United States’ interests in Cameroon are not trivial. Over the past five years, Cameroon has received more than $216 million in U.S. counterterrorism training and support. And even with some U.S. cuts due to credible reports of human rights abuses, such assistance continues. In contrast, U.S. humanitarian aid for those Cameroonian civilians impacted by disaster resulting from the violence in NWSW is minuscule. Out of $18.4 million in U.S. humanitarian aid countrywide, only $300,000 has been earmarked for the response in the NWSW.

Such meager support signals that the United States is not concerned with civilian suffering in the NWSW. In addition, the United States has done little to encourage international donors to respond to the Anglophone crisis. So far, the emergency has only received nine percent of funds requested in a United Nations international appeal, rendering most humanitarian organizations incapable of effectively addressing the mounting needs.

Congress has only just begun to weigh in. In late April, Reps. Karen Bass (D-CA) and Chris Smith (R-NJ) introduced a resolution calling on armed groups and the government of Cameroon to seek a political solution to the conflict. Unfortunately, all parties to the conflict have categorically refused calls for dialogue while people continue to suffer. For this reason, Congress should press the State Department and USAID to adequately fund the response, mobilize other donors, and pressure the government of Cameroon to give aid workers access to civilian populations in need.

At a time when none of the warring parties seem willing to talk, focusing efforts solely on dialogue is not only ineffective but irresponsible. The people of the NWSW require more than that. They require sustained engagement by the United States and other international powers to boost humanitarian aid until all parties are prepared to end the conflict, with the ultimate goal of facilitating the safe, voluntary, and dignified return to their homes. Washington has the resources to quickly and effectively respond to such pressing needs.

It is past time for Congress and State Department to step up and play a larger role in addressing the humanitarian consequences of the conflict. The alternative—silence and inaction—means more innocent Cameroonian lives will be lost.

Alexandra Lamarche is an advocate for sub-Saharan Africa at Refugees International, where her work focuses on conflict, displacement crises, and peacekeeping. Follow her on Twitter @AlyLamb.

Alanna Fox is the special assistant to the president at Refugees International. She conducted a research mission to Cameroon in March and April 2019.