U.S.-Iranian Relations Could Spiral Out of Control 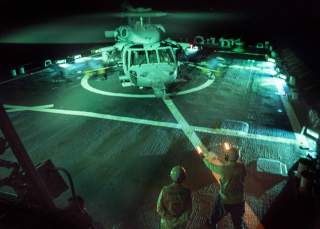 Earlier this month, the U.S. Navy and Iran’s Islamic Revolutionary Guard Corps Navy squared off again in the Strait of Hormuz. According to the Pentagon, four Iranian vessels approached the USS Mahan at a high rate of speed and came less than nine hundred yards from the boat without making any radio contact. U.S. sailors aboard the USS Mahan had to fire off three warning shots from one of the ship’s .50 caliber machine guns before the Iranian vessels changed course and moved away. U.S. Navy officials described the actions of the Iranian vessels as “unsafe and unprofessional.”

Fortunately for all parties involved, the interaction ended without any bloodshed and without U.S. sailors being surrounded and forced to surrender (the U.S. Navy wasn’t so lucky a year earlier, when ten sailors were captured and caught on video with their hands in the air while surrounded by Iranian military personnel). The January 9 incident on the seas is a reminder that U.S.-Iranian relations can quickly spiral out of control and become even more hostile than they are today. President Donald Trump and his national-security team could very well confront a dispute that has the potential to escalate into armed conflict if managed improperly.

Here are a few of the ways that the strained ties between Washington, DC and Tehran could disappear altogether.

The Detention of More Americans

Throughout its thirty-seven-year history, Iran has had a habit of arresting Americans (Iranian Americans in particular) for spurious charges. Those charges include being an enemy of the state, colluding with hostile foreign powers and undermining the Islamic Republic's security. The fact that many of these cases are prosecuted in secret, and the accused individuals thrown into dismal prison conditions before, during and after their trials, is only the start of the ordeal. The detained Americans are frequently used as bargaining chips rather than being treated as human beings with universal human rights. Instead, they are treated like playing cards that can be traded for Iranians in the U.S. justice system who have been convicted of violating U.S. sanctions or committing financial crimes. In the case of American hikers Shane Bauer and Joshua Fattal, Iranian authorities only agreed to release them after they received a $1 million bail.

As Robin Wright of the New Yorker astutely observes, Tehran has shown no evidence of changing its tune. Iranian Americans who fly into the country to visit relatives have been arrested at the airport, charged with conspiring against the Islamic Republic, and incarcerated under questionable conditions. The Obama administration responded to such arrests with public outrage and, when possible, it made secret negotiations to secure the release of those Americans. Trump doesn’t seem to exhibit the same patient qualities for negotiating the freedom of Americans. Should we get used to a much stronger reaction from the new U.S. administration—including sanctions penalties against Iranian entities if Tehran fails to agree to an unconditional release—additional arrests by Iranian authorities could conceivably lead down a perilous path.

More Sanctions Are Passed by Congress

Not a single Republican lawmaker voted to approve the Joint Comprehensive Plan of Action when the nuclear accord was submitted to Congress for review. Now, the GOP controls the House, the Senate and the presidency for the first time in ten years. That means the opponents of the nuclear agreement have the best opportunity they’ve ever had to chip away at the sanctions relief provided to Tehran. Iran hawks are jubilant that the Obama administration—which negotiated the JCPOA—is out and that a new Republican administration has taken its place. That gives them four years to send additional sanctions bills against Iran to the president’s desk.

For those who firmly believe that the JCPOA is an imperfect but necessary constraint on Iran’s nuclear program—and the only thing keeping International Atomic Energy Agency inspectors inside of Iran’s uranium enrichment processing and research facilities—an anti-deal presidency is a significant concern. In order for Tehran to continue receiving the sanctions relief entitled under the JCPOA, the president needs to waive banking, manufacturing, automobile and energy sanctions every six months. A single non-waiver could stop that relief in its tracks. The conditions that entitle a stoppage of that relief are defined in the deal, but they depend on the president and his interpretation of what constitutes an Iranian violation.

The Republican-controlled Congress has already attempted to block Boeing from selling civilian aircraft to Iran. That legislation passed in the House, but it died when it became clear that former president Obama would veto the restriction. Republicans will have even more impetus to do something similar with a Republican president in the White House. It is impossible to know how many Iran sanctions bills will be delivered to the White House’s doorstep this early in the 115th Congress, but surely U.S.-Iran relations will go into a tailspin if Trump signs any of those bills into law. Tehran will categorize those bills as acts of bad faith by the new U.S. administration and reaffirm one of its chief pillars: that the “Great Satan” isn’t to be trusted to uphold agreements that it tells the world it will uphold. And Iran’s response could include everything from kicking IAEA inspectors out of the country—just as Saddam Hussein did with UNSCOM in 1998—to breaking thousands of centrifuges from their seals.

Miscommunication in the Persian Gulf

In 2015, U.S. Navy sailors encountered Iranian speedboats in unsafe situations a total of twenty-three times. In 2016, that number increased to thirty-five, one of which included the capture of ten American sailors who inadvertently drifted into Iranian territorial waters. Needless to say, the tension in the Persian Gulf and the Strait of Hormuz isn’t dissipating. If anything, the defense capabilities of the IRGC Navy have increased. Now, the regime views it as one of its most powerful assets to retaliate in the event of a United States or Israeli military attack.

Miscommunication could also occur and lead to accidents that Tehran would likely view as deliberate hostile acts on the part of U.S. naval forces. As American Enterprise Institute scholar J. Matthew McInnis wrote, Washington, DC and Tehran don’t have a crisis-management hotline that is senior enough to de-escalate incidents quickly when they happen. Lower-level communications are haphazard and uneven, and much like the dust-up in early January, Iranian naval personnel sometimes don’t even bother to answer the calls. This is a crisis waiting to happen, a situation that won’t be contained unless Iran accepts the United States’ offer of a permanent hotline among senior military officials.

Iran's increasingly aggressive behavior in challenging the U.S. Navy in the Strait of Hormuz, coupled with a bipartisan agreement in Washington, DC that Iran is America’s principal adversary in the region, could lead to more Americans being detained by Iranian authorities and possibly leveraged for prisoner swaps or ransoms. It has happened before, and it will happen again. The Trump administration’s response to a naval confrontation and domestic political pressure to slap more sanctions on the Iranian economy will indicate what's in store for U.S.-Iranian relations over the next four years.