The U.S.-Japan Alliance: Facing a New Era of Extreme Danger 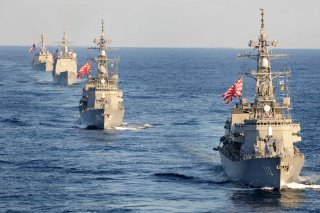 Japan is a critical component of America’s security architecture in Northeast Asia. It hosts roughly 54,000 U.S. military personnel who have access to eighty-five bases or facilities. In addition, Japan provides about $1.7 billion a year in host nation support to fund U.S. troops.

The original rationale for the alliance can be traced to the late 1940s and early 1950s, with the communist takeover of mainland China and the onset of the Korean War. In this context, the United States viewed Japan as a critical counterweight to the growing threat of communism. A 1951 National Intelligence Estimate cited three key reasons why the United States had to bring Japan into its Pacific alliance system: Japan’s industrial potential; its trained workforce; and the country’s geographic location next to the Asian mainland.

Writing in 1965, Ambassador Edwin Reischauer outlined three key objectives for America’s relationship with Japan: 1) to ensure that Japan’s “industrial potential does not drift to the Communist side or into a position of neutrality”; 2) to maintain access to U.S. bases located within Japan and in the Ryukyu Islands (including Okinawa); and 3) to encourage Japan to play an active role in the economic development of free countries in East and Southeast Asia.

But another American goal was urging Japan to build up its military capabilities so that it could contribute more to its own defense and, eventually, to regional missions. This was a challenge because, as Reischauer characterized it, the Japanese people had “built up the myth that peace in Japan [had] been the product of their ‘peace constitution,’ not the U.S. defense posture in the Far East.“

However, not everyone in the U.S. government shared the view that Japan should be pressured in this way. In 1968, the U.S. State Department’s Policy Planning Council issued a report titled “Japan’s Security Role in Asia.” It posited three possible scenarios for Japan's military evolution that ranged from a minimum to a maximum military buildup.

On the extreme minimum side was the Alpha strategy (“defense only”), in which Japan would maintain minimum capabilities while relying exclusively on the United States. The middle scenario was the Beta strategy (“defense plus peacekeeping”), in which Japan would develop defensive military capabilities, but would limit international engagement to peacekeeping.

The maximum scenario was termed the Gamma strategy (“major regional military power”), in which Japan would pursue a robust military buildup and thus enjoy “a greatly expanded regional role...that would permit her to assume a significant share of the security, at least of the Northeast Asian area for which U.S conventional military forces are now required.” The study noted that for many American defense planners, the Gamma strategy appeared optimal since it would result in a military-capable Japan that could “relieve the U.S. of some of its regional security burden.”

But the study also noted that the Gamma strategy would be a double-edged sword. A Japan possessing “significant autonomous...military power” could lead to “nationalist pressures” encouraging Tokyo to pursue “strategic independence from the U.S.”

In the contemporary context, a Japan that possesses new capabilities, such as counterstrike missiles, may be in a position to initiate or respond to hostilities at a time and place of its own choosing. In such a scenario, the United States, per Article 5 of the defense treaty, would be obligated to support its ally and potentially enter the conflict.

More significantly, the Gamma strategy has broad implications for the second major issue in the U.S.-Japan alliance: extended deterrence, considered the bedrock of the alliance. The Department of Defense defines extended deterrence as the American “commitment to deter and, if necessary, to respond across the spectrum of potential nuclear and non-nuclear scenarios in defense of allies and partners.”

Although the Pentagon prefers the freedom of action that a “spectrum” of responses—nuclear and non-nuclear—implies, American extended deterrence promises to Japan have often emphasized the nuclear dimension, hence the term “nuclear umbrella.” However, a Gamma strategy in which the U.S. encouraged Japan to invest more resources in its military could result in Japan being more willing to pursue “an independent nuclear capability,” according to the study.

Consequently, the study concluded that the option most in accord with America’s national interests would be to encourage the Beta (middle) option, in which Japan had reasonable capabilities and only limited international deployments (peacekeeping).

However, the security environments of 1968 and 2023 are quite different. Japan—and indeed the U.S.-Japan alliance itself—faces acute nuclear and conventional threats emanating from neighboring countries that would have been unimaginable just a decade earlier. Thus, Japan is pursuing the Gamma option on its own initiative.

So how can the pitfalls of the Gamma strategy be avoided? Among other actions, the United States and Japan should tighten their operational relationship through increased and substantive joint exercises (featuring thorough and honest after-action reviews). To improve functional fluidity, the two countries could also reconcile their disparate views and practices regarding information security.

The old days in which the U.S.-Japan alliance was based on a hierarchy (with the United States providing the military muscle while Japan focused largely on logistical and financial support) are clearly over. Japan is emerging as an equal partner. This will inevitably feature growing pains, but careful management and planning will result in a far more resilient alliance capable of confronting contemporary security threats well into the future.

Dr. Paul J. Smith is a Professor of National Security Affairs at the U.S. Naval War College. The views expressed here are the author’s own.