U.S. Leadership Can Lead to Victory in Ukraine 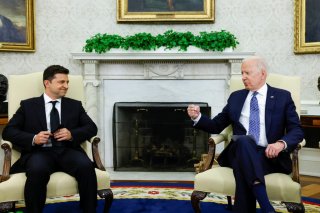 THE PAST decade has been marked by great power tensions as Beijing and Moscow ever more brazenly challenge the world order that the United States and its allies created after World War II and adjusted after the Cold War. And sadly, momentum in this contest has seemed to be with the authoritarians. China’s growing economic might has been accompanied by global economic outreach through its Belt and Road Initiative, island-building provocations in the South China Sea, and an increasingly aggressive insistence on gaining control over Taiwan. Moscow’s successful aggression in Georgia was followed by a bloodless seizure of Crimea and a successful intervention in Syria. In the meantime, the U.S. campaigns with partners in Afghanistan and Iraq, and interventions in Libya and Syria, turned out badly. The circumstances of the withdrawal from Afghanistan were an embarrassing fiasco.

No wonder that against this backdrop numerous commentators have been talking about the authoritarian challenge to democracies. And it is perhaps symptomatic of this new international era that the two leading authoritarian leaders, Vladimir Putin and Xi Jinping, issued a statement during their early February meeting in Beijing, suggesting the closest cooperation between their countries since the heyday of Sino-Soviet relations in the early 1950s. That statement seemed to secure Putin’s flank as he prepared for a major new escalation of his eight-year war against Ukraine. Given the major failures of Putin’s February 24 invasion, we may well look back on that meeting as the high point of the authoritarian tide.

The failures of the Russian escalation were evident in the first days. Unity in NATO has been greatly strengthened as Germany and other members committed both to raising defense spending to the long-sought 2 percent level and to sending arms to Ukraine. The United States, the EU, and other key other countries levied punishing sanctions on Russia. These measures include substantial export controls and the end of the controversial Nord Stream 2 pipeline. Economists predict that these measures will cause the Russian economy to lose 12.5 to 16.5 percent of its GDP in 2022; that, plus the export controls, are already weakening Moscow’s arms industry, and this impact will only grow with time. The UN General Assembly condemned Moscow decisively, and two famously neutral countries have asked to join NATO (Finland and Sweden). In other words, the West and its key global partners have found a new unity and sense of purpose.

These developments make clear that, whatever the outcome of Moscow’s latest invasion of Ukraine, Putin has dealt himself a major strategic defeat. But even worse for the Kremlin, its conventional military, widely assumed to have been the second- or third-most capable in the world, has failed thus far in Ukraine. Putin’s initial attempt to seize Kyiv and place a compliant regime in power failed and cost him anywhere from 15,000 (a British estimate) to 25,000 (a Ukrainian estimate) dead. His reconstituted forces in the east and south have retreated from Kharkiv, Ukraine’s second-largest city, but are now making incremental progress in the east.

The question now is whether the United States and its allies can capitalize on Putin’s debacle to ensure that his revisionist foreign policy is firmly blocked and to send a warning to China and the junior authoritarians that the West is back. That depends on leadership in Washington and other Western capitals. The key is to maintain unity in NATO and coordination between the United States and the EU, and to provide Kyiv with all means needed to ensure that it defeats Putin’s invasion of Ukraine. The aim is to ensure at a minimum that Ukraine remains a viable, fully independent state within the borders that it controlled before the February 24 offensive and that punishing sanctions remain so long as Russia controls any Ukrainian territory. This means that the West needs strong, creative leadership.

Such leadership is not to be found in French president Emmanuel Macron’s admonition to avoid humiliating the war criminal Putin, nor Joe Biden’s confused echo of Barack Obama’s search for a Putin off-ramp. That is exactly the wrong way to proceed—a failure of imagination that continues the failed policy of accommodation that the West practiced after Moscow’s war on Georgia and the theft of Crimea. It would be a great strategic and moral mistake because the “off-ramp” would require some additional territorial gains for Putin’s escalation. Strategic because, after a pause, Putin would reconstitute his forces to come back later for the rest of Ukraine. Moral because the Ukrainians in the newly surrendered territory would be subject to the tender mercies of a Kremlin officially bent on “de-Nazifying” Ukraine—a justification for war crimes, if not genocide.

British prime minister Boris Johnson comes closest to providing the requisite vision and leadership in calls for Ukrainian victory. For this to work, of course, the United States must play its traditional leadership role. The good news is that the Biden administration and a large bipartisan majority in Congress have passed the Lend-Lease Act and are working on a $40 billion aid package, most of that military. But the administration must do better in providing all the arms that Ukraine needs not just to block further Russian advances but to push them back, at least, to the February 23 lines.

Both the administration and its congressional partners must make clear the U.S. stake in this struggle. Defeating Putin in Ukraine is the best way to defend our NATO allies on Russia’s border—the Baltic states. Ukrainian forces are able—unlike our various allies in our failed interventions in Afghanistan, Iraq, and Syria. We just need to send them military and economic assistance. Even if this goes on for some time, it very much serves our interest. But if we send more and sophisticated weapons now, and tighten sanctions, this can end sooner.

This outcome would be the first victory for Western-backed forces on the battlefield since Desert Storm, and it would come against a malevolent regime. Nothing else on the horizon would restore the prestige of the democratic world as quickly as this. It would give the newly non-aligned nations reason to reconsider the appeal of the authoritarians and China to reconsider the virtues of the “wolf warrior”  approach towards its neighbors.

John E. Herbst is a former U.S. ambassador to Ukraine and Uzbekistan, and Senior Director of the Atlantic Council’s Eurasia Center.