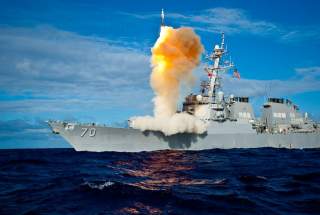 The United States needs to pursue a “dual-hedging” approach towards the evolving U.S. Ballistic Missile Defense System (BMDS). Although the Missile Defense Agency (MDA) successfully conducted a test of the existing national system on June 22, when the Pentagon intercepted a simulated incoming warhead in outer space, critics on The National Interest website and elsewhere have correctly identified deficiencies in the current variants of the Exoatmospheric Kill Vehicle (EKV) now on the 30 Ground-Based Interceptors (GBIs) based mostly in Alaska, with a few in California. Between 1999 and 2013, only half of the 16 tests of these EKVs succeeded.

Even so, critics’ proposed strategy of suspending work on building U.S. defenses until ballistic-missile defense (BMD) technologies significantly improve is excessively and needlessly risky. The danger is that the rogue-missile threat to the U.S. homeland could develop more rapidly than it takes to develop and test a reliable new EKV and make other fixes to the GBIs. While BMD technologies will never be perfect, missile defenses continue to improve, providing some means of deterring missile threats by emerging nuclear-weapons states that might aim to threaten the United States—such as North Korea.

In addition, the critics tend to analyze each U.S. BMD component in isolation, and fail to appreciate all the synergies currently or soon available throughout the system. The best strategy would be to continue to try to improve the existing GBIs during the years it will take to develop and test a new EKV, meanwhile using the growing capabilities already available in the Aegis/Standard Missile-3 (SM-3) to help fill the gap until more capable systems become available in the long term, as funding and technologies allow.

The June 22 test, the first successful GBI intercept since 2008, should help restore some confidence in the existing Ground-based Midcourse Defense (GMD) system. Nonetheless, neither of the two variants of the 150-pound “kill vehicles” are sufficiently reliable and effective to serve as the foundation of a long-term GMD architecture. They cannot provide a robust defense of the U.S. homeland if North Korea or another difficult-to-deter, hostile country were to develop the capability to attack the United States with more than a few nuclear-armed warheads on intercontinental ballistic missiles.

The Capability Enhancement-I (CE-I) EKV, deployed from 2004 to 2007 and currently on some 20 GBIs, has only succeeded in half its tests. It failed its most recent drill last July. The somewhat more advanced CE-II variant, presently on approximately 10 of the GBIs, failed its first two tests in 2010, leading the Pentagon to suspend planned purchases of at least 14 more CE-II-armed GBIs until that variant achieved a successful test, which it did on June 22.

Despite its March 2013 decision and the recent test success, the Obama administration should continue to develop a new EKV to replace the current variants, which were rushed into service a decade ago. The aim should be to have a more reliable kill vehicle that undergoes a comprehensive development and testing phase before deployment. The tests should be more frequent, involve interceptions at higher speeds and longer distances, simulate a range of countermeasures including decoys, and encompass both the entire system and its critical components, which are often manufactured by diverse subcontractors. A more modular design than with the current EKV variants would make it easier to replace and upgrade the kill vehicle’s components, which can take a year with the existing variants.

Future contracts with Boeing, which has been the prime contractor for the GMD since 2001, or the next lead systems integrator should be written to include incentives for quality improvements, reliability, maintenance, and good systems engineering to make the GMD more robust against defects. Cost cutting, though important, is the highest priority of the existing contract that began in 2011 and will expire in 2018. This has proved penny-wise but pound-foolish, since Boeing and other contractors have lost money due to failed tests, whose causes might have been averted.

The new EKV could draw on other critical technologies developed during the past decade. For example, although the current EKVs are designed to operate autonomously, the future variants could take better advantage of the advances in BMD sensor integration, which allows defenders to combine data from many types of sensors, at different locations, to better track and plot targets, and to potentially decrease the requirements for onboard guidance. In addition, there could be further improvements in the next few years in the kill vehicle’s ability to discriminate between incoming warheads and other nearby objects, such as missile junk and perhaps decoys.

Unfortunately, experience teaches us that we cannot predict how long it will take to develop a reliable next-generation EKV. Some estimates are as short as three-to-five years, but there can be no guarantee that a new EKV developed on such an accelerated timetable will work any better than the current variants.

To reduce the risks of an offense-defense gap arising from unexpected new threats or further development stumbling blocks during the years it will take to develop and test a more reliable EKV, the best option for the next few years would be to pursue a dual-hedging strategy.

First, the Pentagon should quickly strengthen the current GMD by upgrading the existing GBIs with the hardware and software fixes validated in recent and near-term future tests as well as by purchasing the 14 new GBIs that Defense Secretary Chuck Hagel said in March 2013 he wanted to deploy by late 2017 if the second-generation EKV could overcome its initial test failures. The defenders will want to launch several GBIs at each incoming warhead to increase their chances of hitting it.

Second, pending development and deployment of a reliable next-generation EKV, the Pentagon should use the SM-3 variants that are already under active development to augment U.S. homeland defenses. In particular, the SM-3 Block IIA, which is scheduled to become available in 2018, could provide an additional interception layer for warheads that overcame the GBIs.

The advantage of using the proven Aegis/SM-3 system to supplement the GBIs is that this option: 1) would cost significantly less than developing an entirely new BMD system, 2) can be made available more rapidly than the next-generation EKV, 3) uses proven technology that does not depend on making improbable revolutionary progress with directed energy systems or other envisaged new capabilities, 4) would probably have less of an adverse ecological effect than constructing a separate East Coast GBI site and 5) provides a more flexible homeland BMD architecture that can change as conditions and technologies evolve.

The United States will also require additional Terminal High Altitude Area Defense (THAAD) batteries to deploy on land in Europe, Asia and the Middle East to reduce the need for SM-3s in these regions. More Army Navy/Transportable Radar Surveillance system (AN/TPY-2) radars will be needed to support them. Restoring the 18 radars that the MDA original planned for would be a good place to start. In terminal mode, the AN/TPY-2 acts as a fire-control radar for the THAAD system, while in forward-based mode, it can track ballistic missiles soon after their launch and contribute fire-control data to the Aegis ships.

These additional outlays should be fiscally sustainable and politically feasible, since they will increase the number of systems that are already being developed, rather than require improbable revolutionary technological or political breakthroughs.

Richard Weitz is the director of the Center for Political-Military Analysis and a senior fellow at the Hudson Institute.