The U.S. Must Be ‘All in’ on Africa for the Long Haul 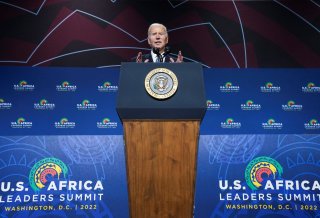 On December 14, President Joe Biden delivered a message of conviction to the delegates of forty-nine African governments and African Union representatives assembled in Washington for the U.S.-Africa Leaders Summit: “The United States is all in on Africa’s future.”

The three-day summit, only the second of its kind and the first since 2014, is a significant step in the right direction for U.S.-Africa relations. It is also a necessary corrective to the Trump administration’s policy toward the continent, which, even in its most charitable form, can be described as benign neglect. Uncharitably, it came across as outright disdain.

Yet, reversing the Trump administration’s Africa policy is not enough. If the United States wants to earn back its legitimacy in Africa and match China's growing soft power influence, it has to put its money where its mouth is. The Biden administration’s Build Back Better World (B3W) is an ambitious, albeit under-articulated, policy directive that attempts to keep pace with China’s grand international development plan known as the Belt and Road Initiative. U.S. policymakers must act swiftly to translate Washington’s abstract ambitions into concrete action. The United States is lagging behind China in Africa and must act quickly to catch up.

China launched its first Forum on China-Africa Cooperation (FOCAC) in 2000. Every three years since, the FOCAC Summit rotates back and forth between Beijing and a different African city serving as host. During these summits, government and business leaders from China and Africa come together to network, socialize, and coordinate plans for future cooperation. In 2009, China surpassed the United States as Africa’s largest trade partner. In 2021, two-way trade between China and Africa surged to a record high of $254 billion, while the U.S. figure stood at $64.3 billion.

China also serves as the lender of choice for most African governments, demonstrated by $153 billion in public sector loans between 2010 and 2019. In addition to loans, Chinese investment has grown by leaps and bounds in recent decades, increasing at an average compound rate of 18 percent between 2004 and 2016. Yearly flows of Chinese investment have continued to outpace those of the United States to the point that the total stock of foreign direct investment for China and the United States in Africa is now roughly equivalent.

According to a report by McKinsey, the number of Chinese firms operating in Africa is estimated to be 10,000, far exceeding that of the United States. These firms come in various sizes and forms, ranging from family-owned businesses to small and medium-sized firms to traditional Chinese state-owned enterprises. In recent years, privately held Chinese-based conglomerates such as smartphone manufacturer Transsion, telecommunications giant Huawei, online retail magnate Alibaba, and satellite-TV provider StarTimes have also developed a significant presence in Africa.

In the past two decades, U.S. interests in Africa have dwindled while Chinese political and economic engagement has reached record levels. Not only has China continued to demonstrate the importance of its relationship with African countries in words, through keynote speeches and policy papers, but also in deed, through high-level diplomatic visits and substantial economic commitments. For these efforts, China has earned a great deal of goodwill among the African people, diplomatic support at the United Nations, and success in persuading countries to renounce ties with Taiwan (apart from holdout Eswatini).

President Barack Obama’s 2015 trip to Kenya and Ethiopia marked the last time an American president traveled to an African country. Biden has announced plans to return in 2023 with other key officials such as Vice President Kamala Harris, Secretary of State Antony Blinken, Secretary of Defense Lloyd Austin, Treasury Secretary Janet Yellen, and Commerce Secretary Gina Raimondo. Biden has also announced over $15 billion in new two-way trade and investment and an additional $55 billion in funding for development projects related to global health, clean energy, and gender equality over the next three years.

These announcements are promising, but they must be followed up with concrete action and continued outreach. If Washington wants to revive its declining global reputation and compete with China’s growing influence, it should begin by reforming its relationship with African countries. This includes a fundamental rebalancing, with the understanding that African countries are assets and partners with much to offer. This is a mutually beneficial relationship in which the United States has as much to gain from Africa as Africa has to gain from the United States.

The months and years to come will show whether the United States is serious about its African ties. Vacillating between attention and neglect between administrations is no way to build enduring trust. The United States must remain committed to developing lasting relationships with its African partners that persist beyond election cycles. While the recent U.S.-Africa Summit is a crucial step in signaling the renewed importance of this intercontinental relationship, Washington must prove that it is “all in” on Africa for the long haul, not just when it is convenient.

Matthew Rochat is a Ph.D. candidate in political science at the University of California Santa Barbara and a Graduate Fellow with the Orfalea Center for Global and International Studies. His current work focuses on political economy, foreign policy, and economic development.