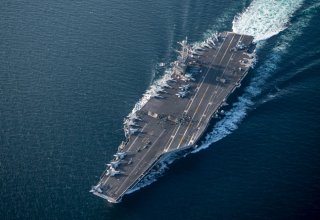 Ever since the conclusion of World War II, the United States has exercised command of the sea. With no rival able to muster a navy capable of mounting more than a partial challenge to U.S. naval supremacy, the United States, as a matter of policy, has ensured that the world ocean remains open to free navigation by all nations.

The contemporary U.S. Navy developed in this permissive strategic environment and, as such, the composition of the navy’s fleet is centered on concentrated groupings of large surface warships such as the Carrier Strike Group (CSG). But now, the establishment of anti-access/area denial (A2/AD) capabilities by the People’s Republic of China (PRC) and other adversaries has significantly altered the status quo such that the U.S. Navy must alter its strategy and revise its force structure.

What was foreshadowed by the Falklands War has more recently been demonstrated by joint U.S.-Swedish naval exercises and Ukraine’s sinking of the Moskva: that large surface warships are particularly vulnerable to asymmetrical capabilities such as air-independent propulsion (AIP) diesel-electric submarines, ubiquitous passive sensors, “smart” mines, and supersonic and hypersonic anti-ship missiles.

Although there is some evidence to suggest that protective countermeasures can be effective in certain limited circumstances, a major fleet action by a modern navy has yet to face the full weight of a near-peer adversary’s A2/AD capability. Quantity has a quality all of its own, and in future naval wars, U.S. adversaries threaten to deploy inexpensive and replaceable weapons and platforms to achieve local numerical superiority over the U.S. Navy and overwhelm its expensive fleet of surface warships.

The U.S. Navy has responded to this threat with its Distributed Maritime Operations philosophy and, more specifically, its Distributed Lethality concept, which promises to increase unit lethality using network-centric approaches and reduce unit susceptibility to detection and targeting by dispersing small surface action groups of vessels throughout the battlespace. Both the U.S. Navy’s new Constellation-class guided-missile frigates and its forthcoming Cooperative Engagement Capability (CEC) are geared toward realizing the concept.

It’s clear that the U.S. Navy recognizes the challenges of operating in a modern A2/AD environment, and the Distributed Lethality concept is a step in the right direction toward meeting those challenges. However, the U.S. Navy’s solutions are not without problems. Notably, the means being assembled to effectuate the concept fail to transcend the Mahanian logic that has plagued naval acquisitions for decades and stymied attempts to foster large-scale change.

The U.S. Navy envisions the Constellation-class frigates as floating Swiss Army Knives that will serve in both a sea control capacity and in CSGs. In reality, they won’t excel in either role; an Aegis-equipped frigate nearly three-quarters the size of an Arleigh Burke-class destroyer will be too conspicuous to go unnoticed and its reduced armament will limit its ability to protect aircraft carriers and other large surface warships.

Proponents of the frigates contend that these limitations can be mitigated by deploying a greater number of ships, but in doing so they seemingly ignore the benefit-cost ratio of the program and its unfavorable implications for a larger frigate fleet. Constellation-class hulls will cost approximately $1.2 billion apiece and each completed frigate will cost about $60 million annually to operate, crew, and maintain. This means that each frigate will cost only 25 percent less than an Arleigh Burke-class destroyer.

Moreover, the U.S. Navy expects to man the frigates with crews of about 200 sailors, or two-thirds the size of the crews that man Arleigh Burke-class destroyers. And that is merely a low-ball estimate.

Given the U.S. Navy’s ongoing manpower shortage, the multiple roles that the frigates will perform, and the sheer number of hulls that will be required, serious questions remain unanswered regarding the allocation of crews and the sustainability of such a large and costly fleet.

Paradoxically, to increase the lethality of its distributed battle force, the U.S. Navy plans to concentrate key assets in vulnerable sensor nodes. CEC, one of several network-centric capabilities under development by the U.S. Navy, is a system of systems in which multiple battle force air search sensors are networked together to generate a single real-time composite track image of air and missile threats that is shared among multiple units in a given battlespace. CEC also provides an integrated fire control capability allowing for threats identified by one unit in the network to be neutralized by other units. The U.S. Navy anticipates that high operational tempos and shot-to-kill ratios, facilitated by CEC, will compensate for its inferiority in numbers.

What in theory sounds promising may actually prove a liability. The abundance of radars necessitated by CEC invite attack by anti-radiation missiles, and the network will be susceptible to disruption by chaff or swarms. In addition, if CEC is disrupted, the platforms and weapons systems optimized for it will be compromised. Furthermore, over-reliance on technology is likely to become a crutch that hinders independent operations.

More importantly, the sensor nodes that are essential to network platforms and weapons systems can be easily destroyed or disabled. Indeed, the PRC already sees modern warfare as a confrontation between systems of systems, recognizes “systems destruction warfare” as the primary method of modern warfighting, and has the means to neutralize network-centric capabilities. And because CEC is a system of systems, the unavailability or loss of any individual system, unit, sensor, or communications link diminishes its overall effectiveness, degrading the capabilities of the entire battle force.

A better approach for the U.S. Navy, and one that would break free of the sort of Mahanian thinking that results in destroyer-size frigates and networked fleets, is to adapt certain tenets of the Jeune École (“Young School”) to the present strategic environment. Developed in France during the late nineteenth century, the Jeune École was a strategic naval concept that advocated the use of submarines and cruisers to prosecute a guerre de course (or, commerce warfare) and small, highly maneuverable, and heavily armed torpedo boats to combat larger warships.

Moving forward, the U.S. Navy should employ a large, forward-based fleet of corvettes, submarines (both nuclear and AIP diesel-electric), and unmanned vehicles (UVs) in pursuit of a similar strategy. For example, in a Taiwan contingency, a dispersed fleet of independently-operated guided missile corvettes—aided by attack or guided missile submarines and armed unmanned vehicles (UVs)—could evade A2/AD hazards to break a hypothetical Chinese blockade. Additional submarines and UVs, operating independently, could raid Chinese commerce to divert enemy resources from the principal area of operations and pressure the Chinese regime politically and economically.

Ultimately, a large fleet of corvettes, submarines, and UVs would prove more survivable, better suited to the mission at hand, and more cost-effective for an increasingly cash-strapped navy. Given that most of the Gerald R. Ford-class carriers and all of the new Constellation-class frigates remain to be built, the time is ripe for the U.S. Navy to reconsider its force structure and divest from vulnerable platforms. While such large-scale changes to the fleet and naval operations undeniably constitute a radical departure from the past, the U.S. Navy should rapidly adapt to confront the changing character of naval warfare.

John Cohen has a background in the biological sciences and is a recent graduate of the Security Studies Program at Georgetown University’s Walsh School of Foreign Service in Washington, DC.