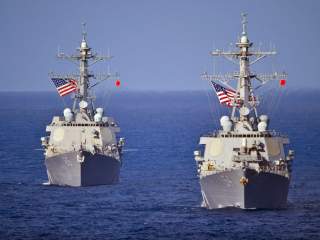 Freedom Of Navigation Operations (FONOPs) have been at the forefront of tensions in the South China Sea (SCS) since the USS Lassen kicked off a long-term campaign by the U.S. Navy on October 26, 2015, at Subi reef in the Spratly Islands. The January 30 FONOP conducted by the USS Curtis Wilbur within twelve miles of Triton Island, one of the Paracel’s features, is the latest iteration of this policy.

The Triton Island operation is consistent with the U.S. interpretation of the right of innocent passage provided for in Article 17 of the Law of the Sea (UNCLOS). More importantly, it confirms the U.S. objective of building support for its broader interpretation of UNCLOS among SCS claimants. The timing of these operations is important: land reclamation efforts by China have begun a new phase with the entry into operation of several runways. Freedom of navigation operations have now expanded into different formats and participants. The Paracels and the Spratlys, the two most contentious flash points in the SCS disputes, have now been subject to FONOPs.

Mild reactions from Vietnam and Taiwan testify to the shifting forces in the region. Vietnam is a key party to the Trans Pacific Partnership (TPP), the free trade agreement between twelve of the major economies in the Pacific Rim. The agreement was released in October and officially signed in Auckland on February 4. The importance of this agreement cannot be understated. By signing a major agreement with the United States, many key countries, including Vietnam, are undergoing a momentous shift in geopolitical leanings. Economic proximity fosters geopolitical proximity.

Many of the TPP signatories are claimants in the territorial disputes and have a vested interest in refraining from denouncing the U.S. interpretation of UNCLOS. In addition, the nature of the targeted features in question also demonstrates Washington’s keen understanding of the mechanics of maritime border disputes. This new action challenges the straight baselines drawn by China from Triton Island pursuant to UNCLOS Article 7, which was not the case during the October operation.

The Triton FONOP supports the interpretation of the right of innocent passage through territorial waters without prior notification. This has been a discreet but constant tenet of U.S. foreign policy since the 1970s. From a logistical perspective, the operation mirrors that among the Spratly Islands: an armed navy ship navigating within twelve nautical miles of a disputed feature. However, the legal implications are different. Subi Reef is not regarded as an island under UNCLOS Article 13 but, rather, as a Low Tide Elevation (LTE).

Triton island, on the other hand, is unambiguously an island under UNCLOS: it is not submerged at high tide. The target has therefore shifted: from a muddled denunciation of land reclamation efforts in the Spratlys to a clear assault on contentious straight baselines in the Paracels. The latter objective requires stronger commitment. Conducting FONOPs within twelve nautical miles of recognized islands may officially target “excessive maritime claims.”

A Matter of Interpretation

The U.S. interpretation of freedom of navigation is centered on the right to navigate vessels unhindered, regardless of their type. On the other hand, China’s interpretation of UNCLOS Article 17 entails mandatory prior permission for warships entering its territorial sea. This interpretation is largely guided by China’s hostility and technological inferiority with regard to the U.S. Navy. The SCS disputes have set the stage for a “legal interpretation” showdown.

The two following factors are traditionally required to change a rule of customary international law: state practice and opinio juris sive necessitatis (opinion as to law or necessity, hereafter opinio juris). With respect to state practice, the requirement does not entail a uniform acceptance by every state but only the widespread acceptance and consistency of such practices. China is not unilaterally attempting to impose restrictions on freedom of navigation. The Chinese view on the legality of military activities in the EEZ reflects the majority view among ASEAN member states.

The list below outlines the respective positions of six ASEAN member states on freedom of navigation within the EEZ, according to the CSCAP Workshop Manila Session 2 (May 27, 2014). It demonstrates that some small and medium coastal Southeast Asian states emphasize the need to respect the rights and duties of coastal states and the need to assert sovereignty over zones adjacent to their territorial waters.

Cambodia: Control over all foreign activities on the continental shelf, irrespective of their purpose; security interests in the 24nm Contiguous Zone (CZ).

China: Requires prior notice for transports of dangerous wastes in its Territorial Sea (TS) and EEZ; requires prior authorization for warships; security interests in the 24nm CZ.

Indonesia: Warships and vessels other than merchant ships must announce their passage in advance; ships navigating within 100 nm are not allowed to stop, anchor or cruise “without legitimate cause.”

Malaysia: Requires prior consent for military exercises and maneuvers in the EEZ and continental shelf.

Myanmar: Requires prior authorization for warships; claims the right to restrict the freedom of navigation and overflight in its EEZ; security interests in the 24nm CZ.

Philippines: Requires prior authorization for warships.

Vietnam: Requires prior notification for warships.

The status quo on UNCLOS Article 17 is shifting. Regardless of differing national interpretations of the right of innocent passage and excessive maritime claims, there seems to be a growing consensus on the value of U.S. FONOPs in the SCS. Recent developments support the assertion that Southeast Asian states are increasingly looking to Washington to oppose Chinese assertiveness in the SCS.

Vietnam and Taiwan in the Paracels, similarly to the Philippines in the Spratlys, are likely to see American FONOPs as the best guarantee against the Chinese buildup. Governments understandably have little incentive in setting out their interpretation of UNCLOS, Article 17 in particular: legal ambiguity enables parties to present convenient interpretations which fit their needs. The Chinese have notoriously avoided giving any clear indication in this regard.

Both Vietnam and Taiwan issued statements in support of UNCLOS and did not condemn the FONOP. Angst over the Chinese military build-up is facilitating this shift. Long-times supporters of the Chinese position such as Malaysia may also be reconsidering their allegiances. Moreover, the USS Curtis Wilbur’s FONOP was likely conducted with the implicit approval of Hanoi. Joint maritime maneuvers by the Vietnamese and U.S. Navy reflect the expanding relationship between the two former foes.

FONOPs are thus becoming a normalized and consensual means of keeping SCS stakeholders in check. Australia apparently conducted at least one such operation in 2015. The “unintentional” flyby of Cuarteron Reef by a B-52 Stratofortress completes the picture which is emerging in the SCS: the U.S. is building a coalition against Chinese military assertiveness and its interpretation of UNCLOS. Unilateral military action by the PLA would only seal the alliance between other stakeholders and the United States.

Conversely, accepting the mandate of international courts and mediation efforts by ASEAN is the only viable method of settling the disputes without jeopardizing the entire region. The United States hosted most ASEAN member states during a February 15-17 Summit in Sunnylands, California. Among the items on the agenda was the SCS maritime disputes and the effort toward a binding Code of Conduct (COC) to replace the ineffective Declaration on the Conduct of Parties in the South China Sea (DOC). The task is daunting. China remains stubbornly attached to its approach to UNCLOS Article 17 and to its “relevant laws”, which remain to be clearly set out before legitimate international adjudication bodies. The PLA may showcase an increasingly potent navy, but it knows it still cannot match that of the United States. Refusal to engage in any constructive legal dialogue is therefore an increasingly perilous game for China.

Little can currently be expected from legal adjudication of these claims, as demonstrated by China’s continued non participation in arbitration against the Philippines at the Permanent Court of Arbitration in The Hague. The Chinese disregard for these proceedings is a powerful incentive for other claimants to seek closer ties with the United States.

By refusing other types of modus vivendi in the SCS, China is pushing its neighbors into the welcoming hands of the United States. The growing consensus on the U.S. interpretation of "freedom of navigation and flight“ demonstrates this shift. China’s bravado displayed through it disregard for international courts and lack of legal dialogue may be its undoing. Ironically, it is reinforcing the U.S. position on the interpretation of the Law of the Sea; the interpretation of a non-signatory.

Truong-Minh Vu (PhD) is the director for the Center for International Studies (SCIS) at the University of Social Sciences and Humanities in Ho Chi Minh City. He is co-editor of the book “Power Politics in Asia’s Contested Waters – Territorial Disputes in the South China Sea” (Springer, 2016).

Jeremy Lagelee is a current LL.M. Candidate at the Georgetown University Law Center as well as a research associate of the Center for International Studies (SCIS) at the University of Social Sciences and Humanities in Ho Chi Minh City.