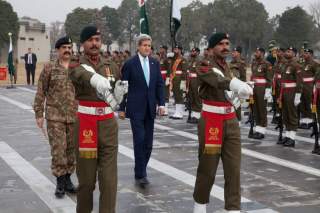 General Raheel Sharif, Pakistan’s Chief of Army Staff, was in Washington last week. He arrived on the heels of Prime Minister Nawaz Sharif’s visit a month earlier. The trips were independent yet related, with two different interlocutors discussing the same subjects: Afghanistan, Pakistan’s ongoing operations against militants in North Waziristan and its broader anti-terror campaign, the country’s nuclear program and India-Pakistan tensions.

The army wanted to convey its own perspective on these issues directly and not solely through the civilian leadership. It has been leading the response to Pakistan’s security issues and felt its voice needed to be heard, believing it could better explain the security and foreign policy dynamics at the heart of the challenges facing Pakistan. Confirming the broad policy agenda of the visit, Gen. Sharif met with a number of administration officials and political leaders, including the heads of the CIA and the State and Defense Departments, as well as members of Congress.

The highlight of the visit was a meeting with Vice President Joe Biden. The White House press release said both leaders “reaffirmed their strong commitment to peace in Afghanistan and the important role that the United States and Pakistan can play to support a reinvigorated reconciliation process in coordination with Afghanistan.” According to Pakistani official sources who spoke on the condition of anonymity, Gen. Sharif sought to clear up any misunderstanding or misperception in Washington about Pakistan’s security and counterterrorism policies and approach to the talks with the Taliban. After having heard from the “horse’s mouth,” the officials felt there should be a greater clarity about where Pakistan stands. And this is what Pakistan also wanted from Washington’s side: to know where it stands.

The talks focused largely on Afghanistan. Pakistan’s view was that before bringing the Taliban to the negotiating table, divergent U.S. and Pakistani strategies needed to be addressed first, and the dialogue has to be Afghan-owned. According to Pakistani officials, the U.S.’ force-first approach—which prioritized operations against the Taliban, as well as the Haqqani network, in order to coerce them into negotiations—might only fracture the group. This would only allow an emergent wing of the Islamic State to pick up the pieces and leave no one to talk to. Reconcilable parties must first be co-opted and talks started; then, those who want to fight must be dealt with by force. And to ensure the success of military action, there ought to be better coordination among the three intelligence agencies—the CIA, ISI and NDS—to close any escape routes.

A recent Asia Foundation survey shows 62 percent of Afghans believe reconciliation with the Taliban will bring stability. But the unity government in Kabul has no unified position on this. Even if the reconciliation process starts, it will only be the first step. Afghanistan’s stability, and that of the region, will require much more. It will depend on serious efforts by Afghans to strengthen their internal unity, governing institutions and state structures. These efforts will have to be backed up by a strict commitment to noninterference by regional actors, most importantly from Pakistan; that cannot come in earnest without the normalization of India-Pakistan relations and improved understanding between Afghanistan and Pakistan.

Gen. Sharif reportedly told CIA Director John Brennan that tensions with India on its eastern borders would need to be reduced in order to reinitiate peace talks between the unity government in Kabul and the Taliban. Presently, India’s military posture will not allow Pakistan to divert its attention or resources to Taliban safe havens, while keeping guard against India at the Line of Control (LOC). Thus far, Indian Prime Minister Narendra Modi has taken a hard line with Pakistan across the board—on Kashmir, borders, regional affairs and terrorism. And according to a recent New York Times editorial, “he has done nothing to engage Islamabad on security issues, and he also bears responsibility for current tensions.”

There is a natural concern here in Washington about the growing nuclear program in Pakistan. Reportedly, Pakistan defended the program as a response to the Indian defense posture, assuring the U.S. that they do not plan to escalate unless India does.

The region is complex, and peace is indivisible. It has been said that India and Pakistan are no longer hyphenated in the eyes of U.S. policymakers. But it is increasingly clear that the South Asian neighbors, along with Afghanistan, are enclosed within the same brackets in some ways, irrespective of their size and national strength. How so? The U.S.’ relationship with one state demonstrably affects intra-regional relations. The U.S.-India nuclear deal and the Asia-Pacific rebalance, for example, may have contributed to closer China-Pakistan ties and the hardening of all sides’ positions.

For stability in Afghanistan and the broader region, and for the achievable peace that is possible thereafter, conscientious action and shared responsibility is required from all stakeholders, both local and remote. This will require America’s continued regional engagement, in a form different from that of the past.

The past U.S. approach will not work because the region is no longer the same. China has emerged, India is rising and Afghanistan hovers between tumult and stability, while Pakistan struggles to reinvent itself. The U.S. can no longer restrict its interests to drone-driven counterterrorism only. It must find a policy that addresses the linkages in South Asia. It has much larger interests at stake, requiring a solid and enduring regional engagement to maintain a broader influence.

For the first time, the U.S. has positive and important relationships with all three countries. While Washington cannot treat each country equally, it should endeavor to treat them fairly. The U.S. would be best served by taking care to advance its relations with each state in a way that does not negatively impact intra-regional relations or harms U.S. regional interests. Above all, U.S.-Pakistan relations must be stabilized.

Historically, the U.S.-Pakistan relationship has served the two countries’ critical interests, but not without a cost to each. The trade-off was acceptable until America’s post-9/11 re-engagement with Pakistan became entangled with a grinding, unpopular war that created problems, contrary interests and distrust on both sides. The relationship came to rest on the narrowest of common interests and public support. Since Prime Minister Sharif’s first visit to Washington in October 2013, there has been a slow but positive reversal in relations. And now, with the second visit of General Sharif, there are grounds for optimism.

In a town where foreign policy is a ceaseless work in progress, and where Pakistan’s friends seem temporary and its enemies permanent, only time will tell if we have heard the last word on the General’s visit. But for now, the signs are positive.

Touqir Hussain, a former Ambassador and Diplomatic Adviser to the Prime Minister of Pakistan, is Adjunct Professor at Georgetown University and SAIS Johns Hopkins University, where he is also Senior Pakistan Visiting Fellow. He writes on South Asian security issues, Iran, and Afghanistan.

David Silverman is an Associate Consultant at Manhattan Strategy Group. He has a Master’s degree in Asian Studies from the Elliott School of International Affairs at George Washington University.