U.S.-Russia Relations are Stuck on Repeat 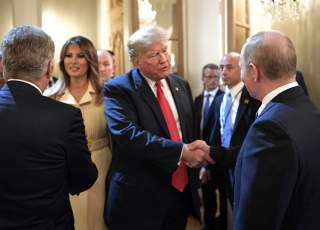 Prior to the summit meeting between President Donald Trump and Russian president Vladimir Putin, I contributed to the “Russia Matters” expert survey about likely outcomes from the meeting. My assessment was that the “normalization [of U.S.-Russia relations] cannot occur as long as Putin and Trump are respective presidents; normalization of the relationship can only occur in a post–Putin/post–Trump environment.” I saw nothing coming out of Helsinki that would cause me to revise this assessment.

The Sisyphean weight of the 2016 elections prevents any meaningful progress from occurring. Both Trump and Putin are now locked into narratives about what did (or did not) happen that prevent this issue from being dealt with—and this holds the entire rest of the bilateral agenda hostage. Not surprisingly, almost all of the U.S. political and media reactions to the summit revolves around Russia’s continued denials of interference and President Trump’s apparent acceptance of those demarches at face value.

The relatively anodyne statements about increasing dialogue across a range of strategic issues facing both countries do not represent a substantive, comprehensive agenda for the U.S.-Russia relationship—and Trump lacks the political capital to be able to undertake any dramatic shift. There should be no doubt in the Kremlin on this point after Helsinki. If we were, however, to put to one side the election interference question, did Trump make any major concessions to Russia, at least those that might justify the accusations of treason that are being bandied about?

For one, the United States has not altered its position that Crimea remains a part of Ukraine and continues to deny any recognition that the annexation of the Crimea to the Russian Federation was legal. At the same time, the United States has not, as a result of the Helsinki meeting, agreed to stop providing Ukraine with weapons or to cease the training of the Ukrainian military. The optics of the President’s NATO summit were poor, to be sure, but at the end of the day, the United States remains committed to rebuilding up its military position in Europe and to continue with the enhanced forward presence in Poland and the Baltic States to ensure that there is a credible deterrent to Russian meddling. The United States is not withdrawing from Europe nor did Trump engage in any sort of “Yalta-2” meeting to give recognition to any Russian sphere of influence in Eastern Europe.

In the joint press conference, Trump also made it clear that he expects American energy producers to enter the European market and to compete directly with Russia for market share. The devil will be in the details, of course—with the crucial question being whether the U.S. government plans to offer incentives or subsidies to bridge the price gap between what American producers are willing to sell energy to European countries for and what those consumers are willing to pay, given that Russian energy is more inexpensive. But also, there is a clear statement of intent that it is the policy of the U.S. government that American energy firms should be playing a greater role in meeting Europe’s energy demand—with the concurrent understanding that this is designed to limit both Russia’s influence as well as its income.

Indeed, the comments of Dmitry Peskov, Putin’s spokesman, that Russia needs “to remain vigilant,” suggest that the Russian side has no illusions that—no matter the personal chemistry between Putin and Trump—the general course of U.S. policy will not change.

Trump will return home amid a great deal of criticism that he did not forcefully call out Putin for Russian efforts to influence the 2016 election. But re-establishing and sustaining Russian-American dialogue on a variety of questions related to maintaining strategic stability makes sense. The question is whether the Helsinki summit gives enough top cover for lower-level Russian and American officials to engage in dialogue and discussion. My initial sense is that it does not—and that U.S.-Russia relations will remain frozen for the foreseeable future.

Nikolas K. Gvosdev is a contributing editor of the National Interest.